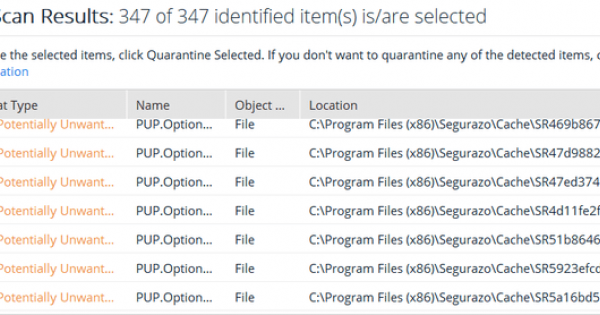 Using an emulator involves many risks on its own, risks that most players would not want to take. As stated on their official site (https://www.bandainamcoent.com/legal/terms) Bandai Namco has been actively banning the use of emulators and the community is less likely to give up helpful information to those who choose the emulated path. The largest risk to emulator users is malware. Emulators are passed around, and not always distributed through official sources, so the downloader must trust the uploader did not include hidden malware.

Nox, which ranks among the most popular emulators on sites such as https://fossbytes.com/best-android-emulators-pc/, has been known to try to sneak in extra programs during installation. Users must uncheck boxes when installing or they will unknowingly install additional programs that could look concerning to the user.

These do not appear to be viruses at first glance, merely PUP--a Potentially Unwanted Program. This usually indicates the above scenario, and the additional programs are usually non-threatening.

However, this does not appear to be the case with the PUP installed by the Nox emulator. Many savvy users have traced back additional issues, such as the dreaded Chromium virus and even blue screens for Windows users, to the Segurazo programmed installed with Nox. Many anti-virus programs will not flag Segurazo as malware, keeping it classified as a PUP so, in the end, users are likely to pass over it.

This virus has caused many users to flock to the internet in hopes of finding a quick solution to their shortcut tactics. Many are met with the same answer:

It seems that the Segurazo virus dodges conventional anti-virus countermeasures, taking some users several hours to entirely remove all of the remnants of this particular malware.

If the user has decided that emulators are the best way to play their beloved games, then they must accept the risk associated with it and even particularly tech-savvy users seem to have issues removing this particular malware from their computers.

It would seem that this defeats the purpose of enjoying a favorite game, so it is recommended to achieve greatness through more legitimate efforts. Articles like the Advanced PVP Guide and the Sparking Tier List are tools more honest players can use to achieve their desired skill level with no risk of malware.