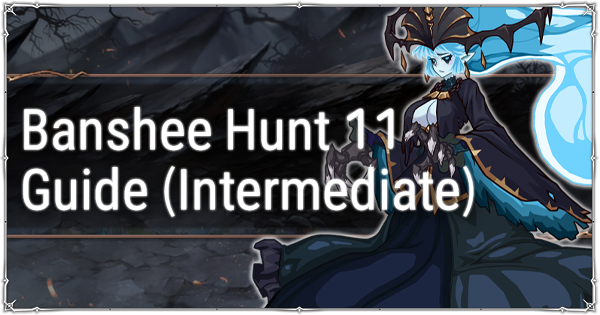 Back to Banshee Hunt

Stage 11 brings an exciting twist to the Banshee Hunt (albeit in a masochistic way). Here are the important changes to be aware of:

Banshee 11 is a tall hurdle for newer players without heavily-invested heroes and high-tier equipment. Luckily, there are several different ways to combat the Queen’s upgraded mechanics and successfully conquer this level.

Unlike in stages 1-10, defensive strategies that work against the Queen’s curses in stage 11 can't handle snowballing curses. Therefore, the best strategy is to use a team formation focused around dealing with the Queen’s poisons and killing the Mistychain squad as quickly as possible.

You can deal with the Queen’s poisons by cleansing it away, preventing it with Immunity, having high Effect Resistance, or evading it altogether. The most consistent strategy is to have two Soul Weavers with Wondrous Potion Vial, in addition to abilities that cleanse or grant immunity to protect your team against the Mistychains’ poisons during the splitting phase.

For the splitting phase, bring AOE damage dealers that can sweep all of the Mistychains at the same time, preventing them from growing stronger and harder to kill. Once they’re defeated, the Queen reappears and attacks with 100% Combat Readiness, so it’s important to clear this phase without lingering poison debuffs. If you lack AOE damage, you can also bring strong single-target heroes that take multiple turns, such as Cidd or Baiken, or use CC heroes like Dizzy or General Purrgis to keep the Mistychains at bay. You should also save up Souls to use your guardian (Arky) during this phase for additional damage.

If your team formation has a remaining hero slot after fulfilling these two conditions (ability to stabilize poisons + sufficient AOE damage), you can increase the speed of your runs by adding a defense breaker such as Falconer Kluri or Iseria. If your survivability is lacking, you can add another defensive option such as Dizzy, Krau, or Assassin Cartuja.