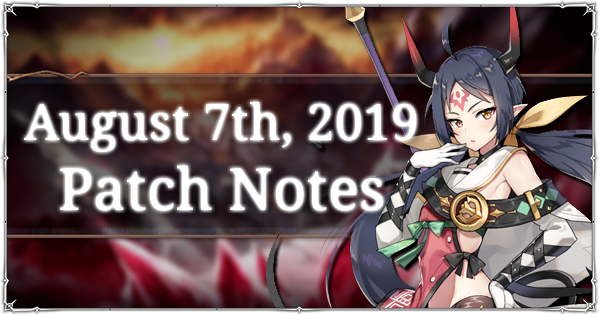 Well, we’ve all been waiting for the refunds for weeks now. Months. YEARS, even. But it’s finally here. You get 50% of whatever Galaxy and Mystic Summons you’ve ever done (prior to 8/2//19) back after this patch is done. Combined with the new pity system for Mystic Summons, expect to see a lot more ‘F2PBTW’ in a chat near you soon.

As discussed last week, the new summoning changes are here. To clarify, ML summons will now only show up in the Covenant pool. This means that any rate-ups will not feature any ML Heroes, as those are considered pity summons instead. (If this changes, we’ll definitely let you know!)

In addition, the much-needed pity system for Mystic Summons is also here, starting with the new banner featuring ML Ravi. Every 200 Mystic Summons will net you the on-banner ML 5* Hero of choice (note that the counter is kept BETWEEN banners, unlike the regular Limited summon banners).

After being delayed multiple times, Apocalypse Ravi has also landed. Featuring a nice kit that focuses on lasting power and team revives, she is sure to make a splash on defensive-type teams.

See below for her full kit.

S1: Almost identical to normal Fire Ravi, with innate lifesteal. However, ML Ravi’s S1 also scales from her maximum health. ML Ravi gains 20 Fighting Spirit when used, which is beneficial for her passive -

S2: ML Ravi’s passive is a simple heal-on-hit, costing her 10 Fighting Spirit for each heal. In addition, for every 20 Fighting Spirit, ML Ravi’s critical chance increases by 5%, maxing out at 25% additional crit chance. However, since she is likely to be hit, a maximum of 20% is much more likely.

S3: ML Ravi’s S3 is a huge AoE that deals a % of her max HP in damage. If she knocks out an opponent, she will additionally revive 1 ally with 5-10% of their max HP AND give them Skill Nullifier. This gives them a chance to recover instead of being KO’d again immediately.

We can expect to see a lot of defending ML Ravi’s in PvP, so brace yourselves - those mystic pulls are coming.

Do remember, however, that with the coming of Lilibet’s buff in September, we are likely to see fewer revivers in the meta.

(4) Hero Rebalancing: First Half of Buffs

Luluca was considerably buffed, gaining additional ATK scaling (her S3 now improves her ATK, which affects her S1 damage and S2 shield amounts.) In addition, her S1 now DEF Breaks enemies at up to 50% for TWO turns.

Baal & Sezan (Fire) gained a large damage increase to S2, which now heavily exploits debuffs. In addition, their S3’s cooldown has decreased from 6 to 4, making it a good option for heavy debuffing.

Ludwig’s consistency also gained a huge boost. Instead of the gambler’s 50% chance to gain invincibility on S2, he is now guaranteed to receive Invincibility after S2, which improves his solo ability and also improves his synergy with A. Lots.

Tenebria now has an up to 50% chance to inflict Sleep on her basic attack. In addition, her S3 now has the same chance to DEF Break as Baal & Sezan, at a max of 85%, and the cooldown was reduced to 5 turns.

Some 4* heroes were also hit by the buffhammer - Leo and Romann.

Leo has generally been regarded as a worse version of ML Purrgis. Well, not any more. He has now gotten a 75% chance to stun instead of the old 50%, and he has the rare Speed Down debuff to boot. Truly a control Hero.

In addition, his normal performance was also upgraded, with a damage increase to both his basic and his S2, which procs his basic.

Romann was seen as a worse Ice version of Basar, who wasn’t amazing to begin with. Romann really buffed up to fit into that armor that he wears, because he now has double the chances to inflict CR down on enemies, and his ult CR grants a 30% self-CR push.

Finally, Captain Rikoris got a bit better. Smilegate stated that they wanted him to focus on the support tank role more; they did this by doubling his heal on S3 and increasing his DEF Break chance when buffed with Increased Speed, giving him extra synergy with his own kit and with heroes like Silk, who can buff the team’s Speed.

Not much to see here, but there is an extra slate available during the arena pre-season for 1,620 Conquest Points. When the pre-season ends this will likely no longer be available, so it should be a top priority for your Arena points.

Various QoL changes were implemented, as listed below:

That’s all for this current week; we’re super excited to get those refunds! Stay tuned next week for the changes and do let us know what you think in our comments or our forum!