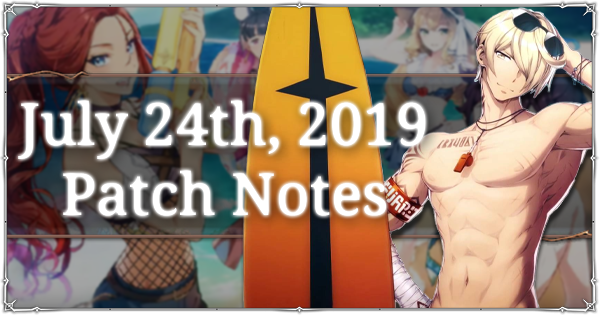 ​​​​​​Hello and welcome to this week's patch notes. Sit down, because we’ve got lots of stuff coming!

Here's the breakdown of what's happening this week:

Up today is the first part of the most recent event, Song of the Sea. As a regular event and not a simple mini-story, the rewards include a Gold Transmit Stone and copies of the new event Artifact, Rainbow Scale. As this is a 3-parter event, only the first part of the rewards/quests will be available this week. This event will also feature our first re-skinned Hero, Seaside Bellona (who will likely come next week).

This event introduces the new concept of Premium Packs, which will give you access to more content during the duration of the event. The first actual skin (equippable to an existing Hero) in the game, Shore Patrol Karin, is one of these additional perks.

These can be bought using Skystones, so free players can still enjoy the event perks. Still, it is extremely pricey for a cosmetic, with the real-world value of these packs being $30 and $60 USD respectively. If you're more focused on gameplay, Energy and Summons are a better value for the Skystones.

In addition to our big beefy boi, Chaos Sect Axe, we now get access to his skinnier brother, the Butcher Corps Inquisitor. Also bulked up in a similar manner, he features improved damage and a guaranteed powerful attack against any enemy unit with buffs (at max investment). In addition, he gets access to the regular Specialty Change tree, featuring higher stats across the board and faster turns. As an added bonus, he also heals for more. Truly a Hero clutching survival (heh).

As predicted previously, Automaton Tower did indeed receive a nerf to the stats and difficulty of its enemies. In addition, the ability to weaken enemies with Stigma has been added to floors 91-100, making it much more likely that less-equipped Heirs will be able to beat the monthly tower. Fingers crossed that we maintain this ability for next month, as Automaton Tower’s enemies are supposed to change monthly.

Look how they massacred my boy… Anyways, after the Wind Rider nerf/bugfix debacle, Smilegate has decided that it negatively affected Sez owners enough that they will give him a recall window. This works like earlier recalls, and refunds Phantasma/Dupes/Penguins in proportion to whatever you put into him. Use this opportunity to save for the limited time Sez, maybe! At least that’s something to be excited about soon™.

Following the Lilibet event, we have a small new Challenge focused on her scissor weapons. This new artifact, Shepherds of Chaos, adds Evasion and DEF based on how low the Hero’s HP total is. As it can only be used on Thieves, it faces direct competition from the 5-star artifact, Moonlight Dreamblade. Do note that this artifact only catches up to Moonlight Dreamblade when the Hero is very low on HP. Still, make sure you farm at least one copy to prevent future regrets. Who knows? We might get a bulky thief who relies on evasion in the distant future.

The recently-buffed Sigret will be featured on the banner for the next week. Ezera’s #1 glasses-wearing homunculus has access to extreme DEF piercing based on the number of debuffs on an enemy, and can do absolutely ridiculous amounts of damage. In addition, any purchases made toward  her banner will contribute toward His Lofty Goals™. Just remember to pull in moderation, and keep in mind that we may be getting a limited banner VERY SHORTLY.

Sol can now hold his Fighting Spirit in when finishing a wave of enemies at 100 Fighting Spirit, instead of instantly getting a pointless extra turn. In addition, the bug where he counterattacked a transforming egg in Raid has been removed.

Equipment Comparison has also been added to the game; when choosing to equip a new piece(s) of gear, a window will show you any stat changes. This makes it easier to visualize what your new stats will look like and cuts down on accidental equipment swap charges.

Lastly, promoting and enhancing units has been streamlined, skipping the stats screen. In addition, after a promotion, you are taken back to the Heroes page and not the enhancement page, allowing you to scroll to a new promotion without having to go back.

Do keep in mind that the changes will be announced next week, and then implemented the week after.