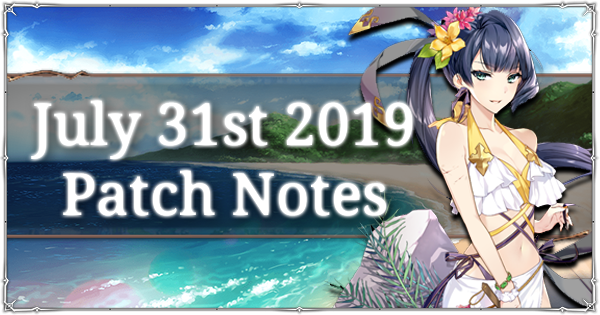 Up first is the girl you’ve all been waiting for, Seaside Bellona (SS Bellona), who is a Ranger like regular Bellona, but otherwise fills a very different niche.

Filling a different niche than regular Bellona, SS Bellona is a unique Hero who brings a lot of potential, despite not packing MaxHP% damage. She can even be paired with the normal version, because really, who wouldn’t want two Bellonas? ;D

As a limited Hero, she will not be in the normal Covenant pool once the summoning period ends. On the plus side, she has a pity pull timer; if you’ve pulled 120 times and haven’t gotten her yet (oof), you will get her on your 121st summon instead. Better save those bookmarks!

In addition to SS Bellona, the new banner will also feature the new 5★ Artifact, Reingar’s Special Blue Motorcycle Drink. This Artifact is basically a reworked AoE version of Uberius’ Tooth that does away with the Critical Hit requirement, as it inflicts extra damage based on the Hero’s attack whenever an AoE attack is used. Do note that it fills the same niche as Radiant Forever in PvE, though in PvP it may fit into some cleave comps. The number of Heroes who can actually use this artifact to its full potential is also rather limited, as Rangers generally do not possess high ATK values (barring Lidica).

Do note that the pity summon timer does NOT apply to Artifacts, so you may go the full 121 pity summons without seeing the artifact, ever. Proceed with caution.

As with all 3-parter events, we get the second portion of ‘Song of the Sea’ this week. The side-story continues, featuring a new collection item, ‘Dead Coral Colony’. In addition, a new Epic Hell stage will be added. Remember to collect additional rewards for getting Story Points, and any new rewards from the Premium Packs.

Due to overall unhappiness with the level of rewards, Smilegate has upgraded the drops for Automaton Tower, starting with this patch. All the accessories dropped are now improved, with increased levels/stats. Of note are the Critical Damage necklace (Crit Chance Set) and the ATK Ring (Speed Set), both of which are in high demand.

In an exciting and much-requested change, SG has decided to add the coveted Moonlight units to the normal Covenant summoning pool. The overall distribution has been changed so that you receive fewer 3-star Artifacts and instead pull Moonlight Heroes from that chance instead. The exact breakdown is a 4.35% chance to get an ML 3*, a .5% chance to get an ML 4*, and a .15% chance to get an ML 5*. Note that this only affects the Covenant pool, so any future banners will feature only the rate-up Hero and no Moonlight units. You can consider this a trade-off for the addition of the pity summons shown below...

...as all banners going forward will have a hard maximum limit of 121 for all rate-up Heroes. Previously limited to, heh, limited-time units, all banners featuring Heroes will now have a hard cap of 121 summons to receive. Note that this still does not affect artifacts, but as Artifacts can be received through Powder of Knowledge, this is less of an issue.

Even better, Mystic Summons now also have a pity mechanic. Every 200 pulls (not reset between banners), you will DEFINITELY receive the featured ML 5★. In addition, you can now occasionally find Mystic Bookmarks in Garou’s Secret Shop. This gives players slightly more consistency and some ability to set goals around summoning.

In addition to the major changes to the summoning system and the addition of Mystic Bookmarks to the Secret Shop pool, Smilegate will also refund 50% of all used Galaxy and Mystic Bookmarks used before August 2nd. This refund will be applied in batches starting on August 8th, so you may want to use as many marks as you can now to maximize the use of your Mystic/Galaxy Bookmarks… or save them for the incoming pity rates. Your choice!

Due to the major balance changes proposed and forthcoming for the characters below, the launch of Arena Season 3 has been delayed. On a high note, though, there will be an extra Unknown Slate available for purchase!

Please see the proposed balance changes and thoughts on the  ML 5* Heroes below:

ML Aramintha’s consistency was hit, as she no longer hits as hard due to losing a stack of burn, no longer CR pushes herself as hard, and has reduced access to her all-stun skill. Still powerful and a forced to be reckoned with on turn 1. Smilegate was being honest when they said that they wanted ML units to be PvP focused, since these changes mostly hurt her PvE consistency.

ML Baal’s consistency was hit, just like ML Aramintha’s. Removing only 1 buff instead of 2 hampers his utility past the first turn, and opens him up to the (rare) counter of ML Cecilia, whose Shield buff will be dispelled instead of any immunity sets that are on enemies. His CR gain has been much reduced as well, reducing his PvE effectiveness. The additional turn of cooldown means that he is much more likely to only get 1 use per PvP battle, and reduces his potency in stall comps.

A. Vildred is now less reliable on defense and his cleave power is reduced. He is still guaranteed to act after revival, but his revenge sweep may now fail to kill.

Crimson Armin - Damage from Critical Hits reduction cut to 15% (from 30% max); S3 now only provides Debuff Immunity for 2 turns (down from 3)

The hit to her damage reduction from crits is painful, but she is still good to have around, since no other Hero fills the same role. While less effective against cleave, she is still the best anti-cleave option when paired with ML Cecilia (especially with the ML Baal nerf). Her consistency, like ML Baal and ML Aramintha, was also hurt, as she can now only provide Debuff Immunity for 2 turns, hurting her longevity in stall comps.

These are all the announced balance changes SO FAR.

Keep in mind that we still expect to see buffs to:

Memory Imprints (except for Speed) generally feel unrewarding. Smilegate wants to change this and has proposed that in the future, we will get the option to either use a Hero’s specific imprint on themselves (ranging from unique skill buffs to existing stat boosts), or apply a weaker party passive. These changes are tantalizing, but we do hope that there will be more access to Unknown Slates coming with these changes. There is no tentative date for this, unfortunately, as the only estimate is that this new system will come ‘in October’. Fingers crossed that the proposed buffs don’t make dupes completely mandatory!