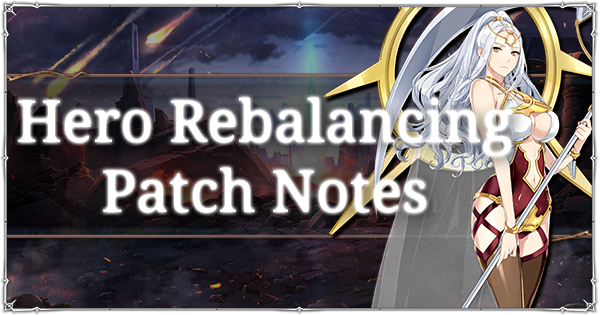 Welcome to this week’s Hero Rebalancing Summary, where we tell you our thoughts on the recent changes that Smilegate has made to Hero Skills. The original patch notes referenced are here.

Smilegate is churning out ML Buffs for weaker ML Heroes en masse. Except you, Sez. Nobody likes you.

Serious business, though: ML buffs seem to promote these weaker ML Heroes to power rivaling top-tier ML 5★ Heroes. This is worrisome, as the top of Arena will now shift even further into these rare Heroes.

That being said, here are thoughts on the buffs and/or adjustments to the Heroes below, and how they may affect the PvP meta going forward.

Much improved. Extra base damage and an extra turn immediately push him far over the top. Indisputably the best neutral AoE cleave available, and 100% safe to use, barring the upcoming introduction of Lilibet. Going forward, you should expect to see much more of him in high-level PvP.

Now a better version of Ruele of Light, with less sustain but the ability to “HEROES NEVER DIE!!” your entire team. Still squishy, so that's a small redeeming factor for those playing against her on offense. Unfortunately, killing both her and Ruele on the same team will be incredibly hard in Champion/Legend, etc., especially if she is paired with the rage-inducing combination of the reworked ML Vildred and regulars such as ML Baal, etc.

As with ML Vildred above, I continue to reserve final judgment until AFTER Lilibet has been released. Extinction **may*** solve some issues. If not, this will continue to be a worrisome trend.

Improved overall for PvE as well, due to a 1-turn cooldown decrease on her S3. She can now more reliably stall bosses.

Overall, her role hasn’t changed very much - she is now less reliant on an opener and can open a fight on her own (at 115 Speed, she’s faster than most CR pushers). She definitely wasn't buffed as hard as ML Chloe or Vildred, but she was improved greatly as a standalone Hero.

Also much improved. Karin is now the 'budget' version of the reworked ML Vildred - a neutral AoE cleave with no free revive, but who possesses much better sustain. If only she were a knight so that she could abuse Holy Sacrifice…

Notable new synergy with ML Chloe, who revives her at the maximum power for her S3.

Ravi is no longer gated hard by her Fighting Spirit, since her damage values will remain the same no matter how much Fighting Spirit she has. After 5 actions - getting hit, or hitting the enemy - Ravi’s buff caps out at her old value. This practically makes her Charlotte, though with far better sustain and tankiness (Charlotte similarly never loses max stacks when she reaches 5 Focus).

Tykebomb Ravi now reaches PROMPT CRITICAL status earlier, and can now use her S3 without fear of losing damage in the long run. She can also use more Devil Drives as well, since her Fighting Spirit gain was increased to 30 instead of 10. That’s 3 times as fast!

Didn't even need the buffs; he’s just that elegant. He’s recently subscribed to the adage ‘An Apple a Day Keeps Sol Away’. That smirk of his while eating apples shows his pearly whites, erasing any doubts about his health and causing debuffs to flee. He's now even better when paired with AssCart.

Sigret’s S2 has taken a small turn for the worse, losing the consistency that it had. This was adjusted into making the follow-up guarantee a bleed stack. Overall a little worse.

Sigret also takes a note out of Cermia’s book, as she now has a significant damage boost on S3 due to the massive 30% DEF ignore.

On the whole, however, bleed is unfortunately still a rather poor mechanic. On bosses that don’t punish you for applying debuffs, however, Sigret’s S3 will do an incredible amount of damage.

Cartuja has the potential to be incredibly annoying in Arena/GW going forward when properly built. As an extremely swole wolfman, Cartuja was already hard to kill.

Smilegate did some odd stuff with his S3 by 'doubling' the damage. Depending on how that was applied, it will either be a mediocre increase in ATK scaling from .5 scaling to 1.0 scaling OR an incredibly potent buff that doubles his health scaling as well, turning it into a 20% self mHP-scaling nuke.

If it is the latter, then the real value here is in his self DEF Buff uptime. This is because Cartuja’s base attack value is still garbage, and you're still probably not going to build him with ATK instead of HP%. This won't be fun to play as, but DEFINITELY won't be fun to play AGAINST.

If it is the former, well, then Cartuja gets the best of both worlds.

The old man is good now, especially for Golem 11. With the addition of Fighting Spirit on his S1/S2, he now has basically 100% uptime on his S3. His scaling, which was never bad during his Ultimate Mode, is still good. (90% ATK + 120% DEF) Can be built full DEF as both his skills scale from DEF, with substats in HP% for  his excellent maximum HP-based recovery (now even better when Soul Burned). He is shaping up to be nigh immortal against Golem 11. Coupled with how good Macerate (S2) is - it's a 40% CR Reduction at max value - he's likely to be a cheap staple for Golem 11 going forward.

Lastly, he is also decent for those long PvE fights now.

Oh, and don't forget that his S3 is no longer cooldown-gated, much like Ravi. If he takes a lot of hits, he’s going to get a lot of healing as well.

Well, he exists. His S1 is still garbage, but it does look a little better with these changes. His S2's proc chance was not increased (still at 30% with MAXIMUM investment). His S3 is still... actually OK, as it was never HORRID. Still, he's a very unreliable applicator of Speed/CR Down. Counterattacking is also generally not a great/reliable thing, making him a janky choice for tanky comps.

Find me on Reddit at /u/Burtgang or check out my small community Discord at https://discord.gg/UvUmvt

Which building to update first
@SoraAmano wrote: imagen726×407 173 KB Steel workshop…
New in E7
@SoraAmano wrote: Basically I’m new in the game, is there…
An arena spike?
@Cam_the_man wrote: I just got Epic 7 Yesterday (I have FEH…
Multiple Accounts
@Jokun wrote: Hi I have a 3 accounts (global, asia, europe)…
Who should I make 6 star next?
@genx wrote: I have been playing the game for about a month…
Read More