Should You Summon? Melissa 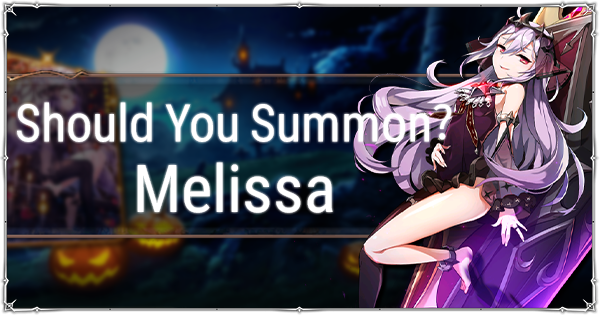 The following banner mechanics apply to this banner:

With these things considered, let's dive into Melissa's stats and kit.

Melissa is 5* Leo Mage who shares the same stats as Ludwig, with very high ATK and passable Speed, but suffering from rock-bottom HP and only passable DEF. As a result, she can hit fairly hard, especially when low on HP, but she can also be easily spiked out by random damage.

Melissa's claim to fame is the new debuff that she brings with her: Curse.

Curse forces a victim to take 40% of all single-target damage that is dealt to anyone on their team when their turn rolls around, making it operate in a similar fashion to Poison/Bleed/Burn. You can stack this damage on one target as well, making it ideal for killing tanks. (Thanks okloio for pointing this out!) Curse is unique to her S3, which provides her with an Extra Turn if it crits, along with some very average damage.

In addition, her kit includes an S2 that provides 1 turn of Immortality on a 4-turn cooldown - fairly low as far as Immortality is concerned.

Finally, her last tool is her S1, which can be Soul Burned to have the same ATK ratio as her S2 (1.5x) and deals more damage proportional to the amount of HP that she has lost. When low on health, this can actually hit very, very hard - significantly harder than S2 at critical health.

So with her kit out of the way, let's see the pros and cons of this Hero:

After viewing this list of pros and cons, you can see that Melissa is heavily tilted toward the following: "Doing a considerable amount of damage to 1-2 targets over two turns, baiting out counterattacks via Immortality, and dying on the next turn after hopefully nuking at least 1 more time".

Despite her low ratios, her damage is still considerable, as her massive ATK can at least somewhat compensate. It's also important that she gets to crit, as without crit, she cannot do her all-important S3-S2 combo, and will probably die on the next turn before being able to use Immortality.

...and speaking of Bloody Rose, Melissa’s banner also introduces it as a rather lackluster 5* Artifact.

This mage-only artifact increases the EFF% of single-target attacks by 30-60%, but it suffers from direct competition with the 3* Artifact Cursed Compass, as well as most debuffers having AoE attacks.

In addition, mages have no lack of strong artifacts, and Bloody Rose simply isn’t that strong. At least it has high ATK at max rank.

In conclusion, I will say that, while she is a nice Hero with a rather powerful ST nuke niche, there are also other Heroes who fill her roles in a similar manner, though none that really amplify the damage dealt by others as well. I see some strong potential for her in GW, where burst access to 1-2 targets is more valued, but less in Arena, where knocking down 1-2 targets may not guarantee you victory (or stop the comeback wipe). Also keep in mind that, if she fails to land the Curse due to EFFR%, you're looking at a long dry spell that she's unlikely to survive.

Pull if you want a cool-looking fanged vampire waifu who can nuke 1-2 targets fairly hard and live for at least 1 turn after that.
You probably don't need to pull if you have a better nuker *cough* Ludwig *cough* or if you're not interested in GW, as she doesn't serve much of a purpose in PvE and her PvP aspect is somewhat limited.