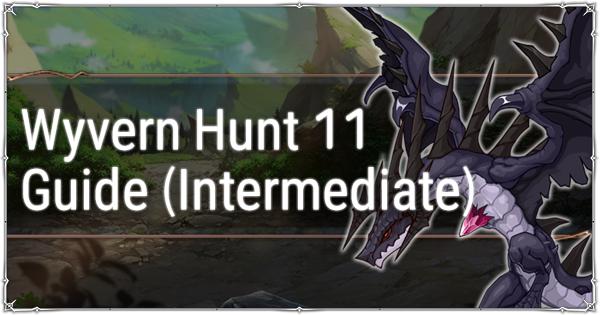 Table of Contents
Back to Wyvern Hunt

INTENSIFYING FORWARD FIREPOWER! - The Wyvern will only target the front-most Hero with its Fireball Barrage, and will always attack 3 times (unless the target has died, or it is ready to use the tailswipe). The damage done by this attack will increase indefinitely as it is used due to the Super Acceleration passive. This serves as a soft enrage mechanic.

In addition, the Wyvern will do bonus damage with every fireball unless it has a minimum of three (3) debuffs.

Armed and Fully Operational - the Wyvern is fully immune to Speed Down. In addition, the new laser Fireball attack will strip away 1 buff PER HIT and does not miss, even against Ice heroes. Since the Wyvern does not miss, it is also much more likely for it to dole out critical hits, which can end your tank’s life rightly.

Exposed Core - The Wyvern’s new Fire Protection passive makes it takes 30% increased damage from Ice heroes. It is unfortunately fully operational against other threats, and gains a 10% CR boost whenever a non-Ice hero ends their turn. Bringing too many non-Ice heroes will lead to it firing when ready much, much earlier.

Lastly, if the Wyvern’s shield isn’t taken down in time, it will destroy the entire Hosnian system-- sorry; your entire team, doing heavy AoE damage, dispelling all buffs on your team, and finally triggering an additional shock wave that deals even more damage (provided that it doesn’t miss).

This is the bog-standard composition and probably the safest overall route. You will want the bulkiest possible Hero in front. The Wyvern does high amounts of damage, and it is generally recommended to have at least 13,000 HP and 1,200 DEF on the tank to survive. Also keep in mind that, if you want your tank to be able to act at all, you should consider some moderate investment in Speed and Effect Resistance as well, since the Wyvern will reduce your tank’s CR by up to 30% if unresisted/unmissed. Slower tanks can be easily lapped by the Wyvern’s high base speed of around 205. You want to avoid this if at all possible.

Debuffers should be faster than the Wyvern so that it deals reduced damage to your tank (or at least close to it in speed).

A good example of this comp would be something like: Angelica, Crozet, Furious, Alexa

This strategy is great if you’re geared up and don’t want to bring a healer. Not bringing a healer means that your tank should be durable enough to at least survive until the first tailswipe AoE - no easy feat, as it will need to survive for at least 4 rounds of damage. If your DPS is good enough, though, you can often kill the Wyvern before it even gets a chance to enter the shield phase.

Keep in mind that you will absolutely need a DEF break on this team and likely other debuffs as well, so that your tank can live long enough for the rest of your team to kill the Wyvern - it only has ~139,000 HP.

A good example of this comp would be something like:

This follows the same formula as the regular tank & spank, but it uses the healer as the frontline tank as well. Due to excellent artifact synergy and enough bulk, healers can often pull double duty with artifacts such as Water’s Origin and Prophetic Candlestick, which help to put out enough healing to temporarily offset the damage dealt. Expect your healer to have her hands full, though.

A good example of this comp would be something like:

Do keep in mind that all of these teams are just examples of compositions that work - you can certainly mix and match team members. Just follow the bullets below and you should be well on your way to completion.

A list of heroes that fit these categories has been compiled below. Please note that you can definitely use any hero, even if unlisted. The ones below are simply strong heroes who have been organized for your convenience. 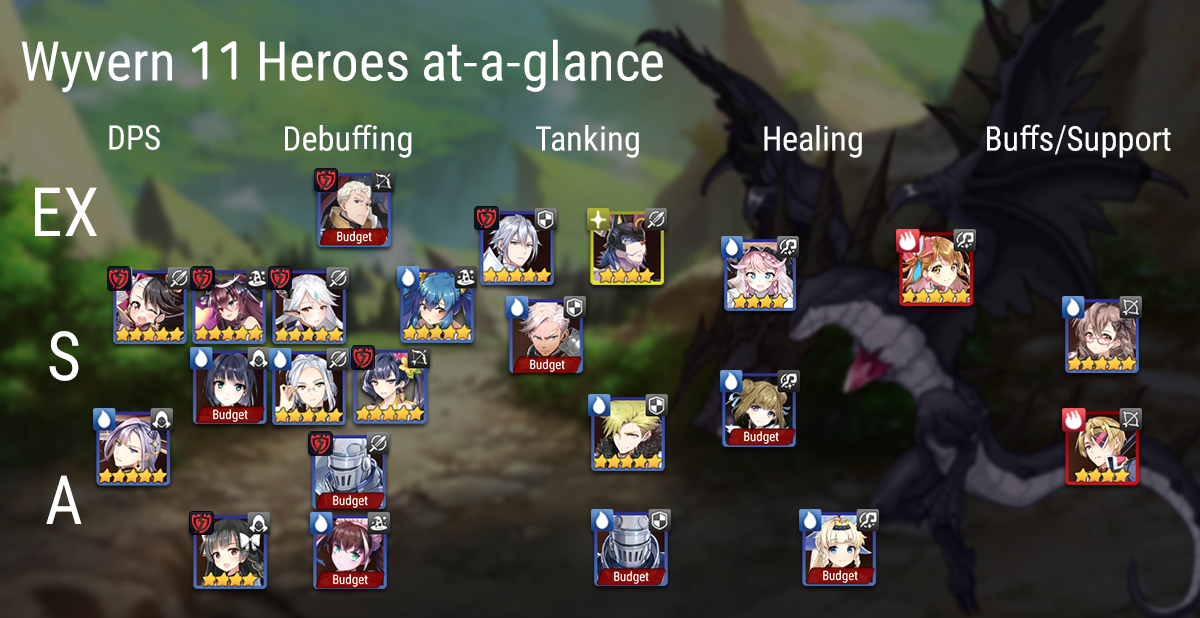 Here we have listed some of the stronger options for Wyvern. Each Hero is accompanied by some tags that fit them and a short description.

If you can grind him out via connections, Crozet is a free and very strong option for tanking Wyvern. He has stellar defensive values and S2 is good at mitigating extra damage, so he is a good user of Noble Oath. He additionally has ATK down on his S1. Just don’t expect him to get many turns.

The poster boy (heh) for Wyvern tank; Krau can keep himself along about as long as Crozet, but more importantly, can be used as a 1-time nuke with his S3. This can greatly alleviate pressure on your damage dealers if he can survive to the shield phase. Keep in mind that he has no debuffs, however.

The OTHER poster boy and formerly much reviled; Tywin’s buffs have turned him into a very solid pick for Wyvern tank. He offers not only the coveted DEF break debuff, but strong CR push/CritRate buffs as well. Just make sure to tune his Speed properly so that his S2 doesn’t go to waste.

Can serve as your tank in a pinch, with good gear. Much more useful for his S1’s chance to inflict DEF break and his excellent passive, which gives him bonus assist chances. While he has been somewhat supplanted by Furious, he is still good to have.

Angelica provides a tough body with the combination of either Prophetic Candlestick (to lower her S2 cooldown) or Water’s Origin (for self-sustain). Her decent HP allows her to stay on the front far longer than a healer should. Just make sure she’s got some speed, or Wyvern WILL lap and kill her.

A. Montmorancy can heal… somewhat. She can also tank… somewhat. There’s no denying that Angelica is probably better than her for this mode, but she does provide some decent healing for herself if paired with Rod of Amaryllis and forced to tank. As a primary healer, she can also do fine, but just keep in mind that her S2 heal has somewhat low potency. Since there are no debuffs in Wyvern 11, she’s much better in Wyvern 1-10, where she can remove the poison stacks. Gear solves all problems, however, and she is no exception. Just don’t expect her to do what Angelica can without at least some nice equipment.

Dizzy is the queen of keeping Wyvern debuffed, despite its Speed Down immunity. She packs the two most important defensive debuffs, Blind and Attack Down, which make Wyvern hit about as hard as a pool noodle. Blind has the added bonus of making the Wyvern’s dispel miss 50% of the time, allowing positive buffs like Shields and DEF+ to last longer. In addition, she can extend all other debuffs and is blindingly fast. Definitely bring her if you have her.

Chloe can do jaw-dropping amounts of damage, and can even serve as a DEF breaker with her Exclusive Equipment. However, you will likely want at least one other DEF breaker on your team, as Chloe is mostly a sub-DEF breaker due to the cooldown/damage potential of her S3. Have her go after your primary DEF breaker if possible.

Chloe’s contribution to the team includes Magic Nail, which can’t be resisted, and gives everyone on your team bonus damage due to its effect (2% of the target’s maximum HP each time it’s hit).

As a result, she is a very reliable debuffer and DPS.

Luluca fills a lot of shoes, with the ability to prolong your tank’s life with her shield/DEF buff, her ability to DEF break with S1 AND S3, and her ability to just plain do a whole lot of damage. Like Chloe, you probably want to pair her with another DEF breaker to make maximum use of her damage.

If you’re struggling with the Wyvern’s shield phase, never worry again with Kise. She does an insane amount of damage to shielded foes, allowing you to easily pass the DPS check. Granted, she doesn’t do that much else, as she possesses no debuffs. In addition, resetting the Wyvern’s cooldowns may NOT necessarily be a good thing - the shield phase is a breather for teams that require healing, and having your tank take a solid beating each turn can be very detrimental.

Alexa is hands-down the queen of budget DPS/Debuffing due to double-dipping with Daydream Joker. In addition, she is very strong for weaker teams, as her poison can contribute that extra damage that the rest of your team just doesn’t have, and also counts toward the minimum of 3 debuffs.

This meganekko homunculus packs some insane damage, exploiting bleeds for absolutely bonkers amounts of damage. One of the best DPS to bring to Wyvern, as her S3 alone does stupendous damage. Her extra attacks also contribute considerable DPS and allow her to, like Alexa, double dip into Daydream Joker.

Karin requires a somewhat awkward stat spread, with ATK/CritDamage/EFF/Speed all needed for best performance. However, she brings excellent damage and a 1-turn DEF break to the table. Just make sure to speed tune her correctly and to bring another DEF breaker, because she’s at best a supplemental breaker.

Speaking of DEF breakers, however, Furious is easily the best DEF breaker in the entire game. He sports a permanent DEF break and provides a teamwide Crit% up buff, making gearing your other Heroes a breeze. He’s also quite possibly the best carrier for Song of Stars, as all of his offensive skills will proc the Target debuff. On top of that, his base speed is excellent at 110, which is amazing for a support.

For about a week, she was insanely good, providing damage, a lot of debuffs, and a DEF break that procced every two turns for Wyvern. Unfortunately, due to Furious being released, she’s somewhat lacking in comparison.

While it is true that her S1 is excellent due to carrying Target, her S3 does nothing to Wyvern other than adding ‘debuffs’, as the Wyvern does not heal and the shield cannot be prevented/dispelled. In addition, her DEF break is flaky given its 50% crapshoot nature. Furious is a much safer (if less sexy) option.

The last Ice hero on this list, Luna, is excellent at her role. She provides a strong DEF break and quite some damage. Unfortunately, her DEF break coverage can be somewhat spotty, given her chancey S1. Her damage also fluctuates like this as well, with her S1 doing anywhere from 100 - 300% of her damage.

Undeniably strong, but consider pairing her with another DEF breaker.

Note: Much Stronger Equipment is REQUIRED for non-Ice Heroes

Tamarinne possesses a teamwide ATK buff and the strongest AoE CR push in the game. This allows her to contribute to the team despite pushing Wyvern’s CR up. In addition, she also functions as a sub-DPS in Idol form, as her S1 will continually proc assists from your strongest character. Probably the best partner for Luna.

Like Tamarinne, he possesses a large amount of teamwide CR, giving your entire team 45% CR at max skillups. In addition, he provides a teamwide ATK buff. Unfortunately, as he is a non-ice hero, he takes 30% more damage from Wyvern. Make sure he’s built bulky and has skillups on his S2, or he isn’t quite worth it. For high-end auto play, however, he’s pretty much the pinnacle of Wyvern tanking.