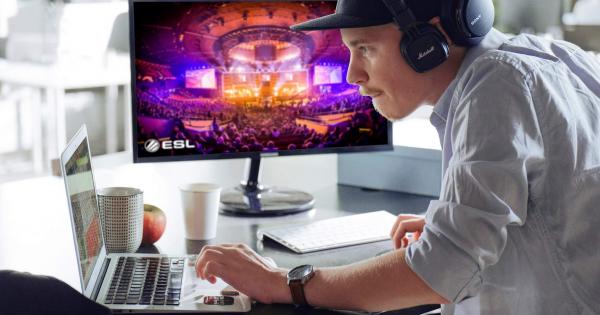 A lot of people may not recognize the name Nielsen, or what it means, but I can almost guarantee it's had an impact on your life in some way or another.

If you're unfamiliar with the brand, Nielsen is an analytics company that makes investors and advertisers feel a lot better about putting their money where their mouth is, via tracking and providing third party analytics.

In short, that Billboard Top 100 list of new records released by your favorite musicians, the TV ratings used to determine which shampoo ad will do best, the sports broadcast numbers that show who is tuning into the radio to listen to the Kansas City Chiefs wreck... well... everyone? All that analysis, all those numbers of viewers, subscribers, listeners, purchasers, heck even website views -- Nielsen has their hands in all of it.

And when I say all of it, I mean legitimately all of it.

On the other hand, you've got a juggernaut in ESL (parent company being MTG -- one of the best strategic and operational investment companies in Esports) who hosts these massive competitions like the one in the image above (Intel® Extreme Masters Katowice in March) -- who is still navigating a "relatively" new industry.

Esports has seen insane growth over the last few years. Investors are generally buzzing about the potential, the sponsorships for brands, the viewers, but there's always a little hesitation.

In short, it's easy to get excited about something. It's not so easy to bet your house on it.

After all, Wall Street and the like were also pretty excited about the housing market before the bubble burst, about Facebook's IPO, and about a lot of other things that went pear shaped. Spending a lot of money on a new industry, even a booming industry, or anything related to technology can be a really risky thing.

But what helps to mitigate risk like that is to have third party validation -- companies that are reputable, that deal in third party analytics, companies like Nielsen saying "Yes, indeed there were 12 million viewers watching Patrick Mahomes doing his best Madden impersonation on national television last night."

When you can show that your numbers are correct because a completely different company ran numbers on the same livestream or the same television show or radio broadcast and came up with the same result? And you can show those numbers are in the stratosphere? You earn investor trust. And you earn advertising trust.

Suddenly it doesn't seem so risky for Nike or Mountain Dew to sponsor the next major Esports event. Which means the industry booms even more than it already has.

It's fascinating to see Esports continue to grow and evolve, and this move (ESL partnering with Nielsen) may seem like nothing interesting to the average gamer. But it's much bigger than it appears. It's yet another milestone (like the VGNN that we covered earlier this month) in Esports being taken seriously in the business and investment world, and taking more and more steps to solidify their position as they continue to be one of the fastest growing industries we've seen in a while.

All in all, video game streaming and Esports doesn't appear to be going anywhere anytime soon. In fact, the next generation will likely grow up in a world where names like Patrick Mahomes are just as awe inspiring as names like Richard Blevins, and where the two athletes are jockeying for the same sponsorship deal from Wheaties.