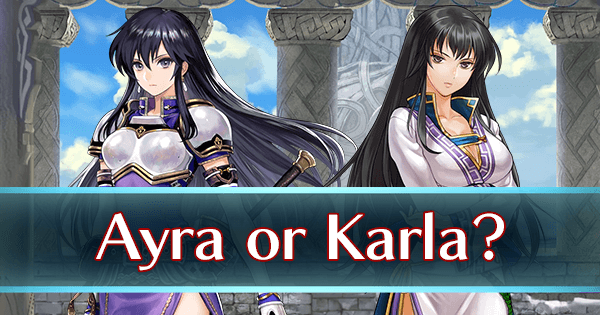 Ayra and Karla are two of the strongest sword units in Fire Emblem Heroes. They’re also quite similar; they’re both incredibly fast (Karla is currently the fastest unit in the game at the time of writing thanks to a superboon that can push her Speed up to 44 base) and have excellent damage output to match. Logically these potent offenses would indicate poor defenses, but both Ayra and Karla both have enough mixed bulk that outside of high-powered blues, they’re unlikely to get KO’d in a single hit.

One of the most common questions asked is how the two compare against each other. The Hero Rankings page on Gamepress typically indicates that many of the staff believe that Karla is better than Ayra. Therefore, the purpose of this article is to detail the reasoning behind this placement.

At an initial glance, there are a few things that are clear:

It’s important to compare defensive bulk rather than raw defenses because both Ayra and Karla are so speedy that they are extremely unlikely to get doubled outside of units that can bypass Speed (such as with Bold Fighter, but even then Ayra and Karla can simply engage these units on their own turn). Karla has 42+23=65 physical and 42+22=64 magical bulk, while Ayra has 41+31=72 physical and 62 magical bulk. The difference in bulk becomes even more pronounced once Ayra swaps her weapon for a refined Slaying Edge (see her unit analysis page for an explanation as to why a Slaying Edge is superior to Ayra’s Blade), as the +5 HP pushes her bulk to 77 physical and 67 magical.

Ayra is clearly superior to Karla in terms of bulk - there is no disputing that 77/67 physical/magical bulk is better than 65/64. Note that while Ayra clearly has more bulk, it’s actually very unlikely that Karla will get KO’d in a single hit even with her lower bulk (aside from high Attack blue threats). So in most cases, Karla’s lower bulk doesn’t come into play, but it is certainly something to keep in mind - this is more relevant at lower merges since bulk increases twice as fast as enemy offensive power does at higher merges.

Karla has clearly better offenses, but it’s important to account for how their choice of weapons will affect their stats, as Ayra and Karla do not utilize the same weapons. In addition, Karla has a superboon in Speed while Ayra does not. So assuming both use a +SPD IV and accounting for weapons, their offensive stats look like this:

So with their weapons, the difference is 4 Attack and 1 Speed, both in favor of Karla. However, Ayra has one ace up her sleeve: Regnal Astra. 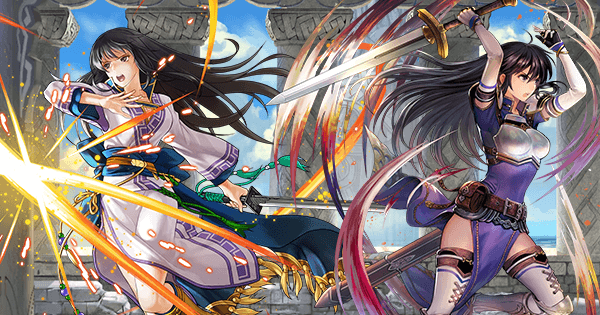 Both Ayra and Karla have a unique feature that makes them stand apart from the rest of the sword infantry; Ayra has her unique Special, Regnal Astra, while Karla has her unique weapon, Vassal’s Blade. Both of these scale off Speed, and are major contributors to Ayra and Karla’s combat prowess. Due to their scaling, concessions need to be made in order to have a reference point for comparison:

Ayra has 47 base Attack with a Slaying Edge. With 50 Speed, Regnal Astra deals 20 damage, pushing her actual damage to 67. Karla has 51 base Attack with Vassal’s Blade. With the +7 bonus damage, she deals 58 damage.

This damage comparison is the primary reason why many of the staff rank Karla above Ayra. Enemies with lower than 30 Defense will typically stand no chance against both Karla and Ayra, rendering Ayra’s higher damage output moot. On the other hand, there are many enemies with more than 30 Defense that Ayra will be unable to KO but Karla can - Nowi is one such example. So combining the fact that Karla’s lower bulk rarely results in her getting KO’d in one hit (even Nowi typically doesn’t KO Karla in one hit) with the fact that Karla has better damage output against the bulkier opponents, enough to push her into getting wins that Ayra couldn’t, results in Karla being ranked above Ayra.

For the purposes of Hero Rankings, Karla is considered superior to Ayra. However, one of the biggest factors ignored for Hero Rankings is Arena scoring, since the point of the exercise is to rank units based on their actual merits, and not the scoring system utilized in Arena. It was assumed for the damage comparison that Karla would use Moonbow as her Special; the problem is that Moonbow is only a 200 SP Special, meaning that using it in Arena will significantly drop Karla’s score value compared to a 500 SP Special like Ayra’s Regnal Astra.

Although Karla’s Vassal’s Blade is worth 400 SP compared to Ayra’s refined Slaying Edge’s 350 SP, that 50 SP difference pales in comparison to the 300 SP difference between any regular Special and a 500 SP Special like Regnal Astra. This means that although Karla has better combat performance than Ayra with this specific build, her highest scoring set will result in her performing significantly worse due to being forced to utilize either Aether or Galeforce.

So if trying to choose between Ayra and Karla for Arena, Ayra is likely the far superior choice due to her better score value relative to her optimal set. 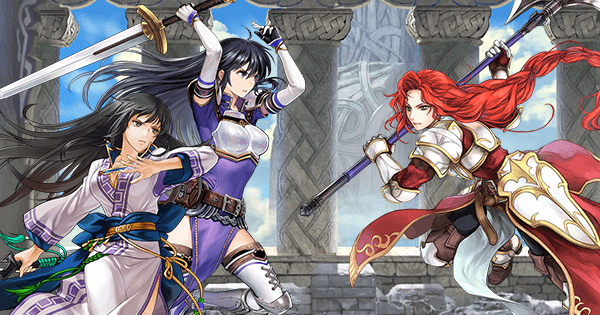 One side effect of the current Arena meta is that powerful Specials are extremely abundant, and one of the most effective means of countering this is to run a skill like Guard or Special Fighter to prevent those Specials from activating. Note that for the purposes of this article, enemies with Guard and those with Special Fighter are essentially identical. Enemies with Guard are a serious concern for both Ayra and Karla, since a large amount of their damage comes from their Specials (particularly if they are running Wrath). However, losing access to Specials impacts Ayra far more than it impacts Karla; in fact, Karla is comparatively much, much less reliant on her Special for damage to Ayra, to the point that she can actually utilize other builds that don’t even rely on damaging Specials. When facing enemies with Guard, Karla and Ayra’s damage output looks like this:

One way to circumvent enemies with Guard is to utilize a build that allows Ayra and Karla to have their Specials charged at the beginning of combat; this generally means using the Quickened Pulse Seal, but can also be accomplished by having an infantry ally with Infantry Pulse or being accompanied by Legendary Hector’s Ostia’s Pulse in a mixed team. This allows Ayra and Karla to activate their Special once even through Guard; if they are running Wrath, then they can even activate a Wrath-powered Special:

This is an identical damage comparison to before; however, the difference arises if they get a followup attack, as neither of them will be able to activate their Special on their second attack. In this case:

This is, of course, ignoring enemy Defense. Karla has superior damage in this case due to a lot of her damage coming from Vassal’s Blade instead of her Special. While 116+Moonbow may not seem like much more than 114, it can make the difference if fighting something like a green unit with Guard, for example.

Thanks to the majority of Karla’s damage actually coming from Vassal’s Blade, she can actually turn to other, admittedly gimmicky builds. For example, Karla can run a Flashing Blade + Desperation + Galeforce set for a wider offensive presence or Pavise + Shield Pulse + Flashing Blade for a deceptively tanky yet extremely hard-hitting build. She can also utilize her basic Distant Counter + Wrath set with Aether and the Flashing Blade Seal; though this will result in her having lower damage output than Ayra, she still does enough damage that she can manage.

Of course, Ayra has alternative builds of her own. Aside from utilizing her base Ayra’s Blade for a Player Phase set, Ayra is also one of the best Firesweep Sword users thanks to Regnal Astra and the Flashing Blade Seal.

In terms of raw performance, Karla is considered better than Ayra for the above reasons. Despite this, Ayra is a better choice than Karla for use in Arena purely based on scoring (of course, the bonus score from Arena bonus units securing KO's makes this difference a bit moot). While Karla will probably perform better outside of Arena due to the lack of scoring constraints, the final choice is ultimately up the player. The actual difference between Ayra and Karla isn’t super significant; there is a reason that they are both placed in the same tier on the Tier List. The best criteria for a player to choose between Ayra and Karla is likely a mixture of playstyle, character, and art (both voice and artwork) preference.

Innes worth investing? (Only one copy somehow and no grails)
I have a bad habit of wasting grail units as fodder then wanting to build them later…
Thoughts on Ascendancy priorities
I’ll be straightforward. I have NO idea whatsoever about who to use my Ascendant…
Newest +10 #45 to the barracks + more
It has been nearly a month since my last thread that I had made so what better way…
AR-D answers to A.Fjorm
I’m really struggling to see it. All of the usual stuff doesn’t work. Forced doubles…
Done one of my objective (for now) in this game!
For thoses who still remember : One of my objective is to +10 all Soeda Ippei grails…
Read More