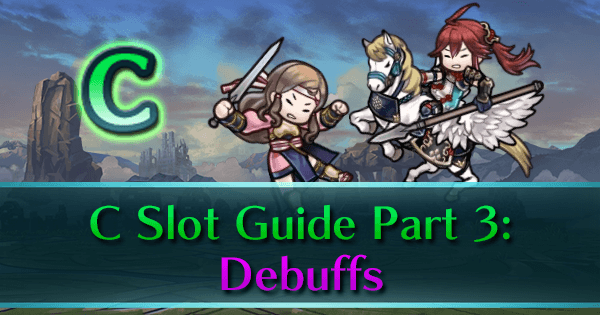 A debuff is a type of effect that has a detrimental impact on the recipient’s stats. Any debuffs can be seen on a unit’s stats, visually indicated through the stat turning red. Inversely, a buffed stat is often visually indicated through the stat turning blue. The color of a stat is determined by whether the stat is affected more by a buff or a debuff. For example, a stat with a +4 buff and a -5 debuff will appear red as the debuff is having a larger impact. You can see for how much a unit is being buffed/debuffed through tapping on the stat in question.

Debuffs from C slots are typically provided to the enemy team at the start of Player Phase. The exception to this rule are the Smoke skills, which provide debuffs after combat. These debuffs then carry through until the affected enemies complete an action or the next Player Phase begins. Debuffs can be reversed through the use of Harsh Command unless the debuffs are a result of Panic. Debuffs cannot be stacked; only the highest possible debuff will be taken into consideration.

The most basic form of debuff there is, Threaten skills used to often be a go-to choice for any units where deciding on an ideal C slot was tricky. This was primarily due to Threaten skills originally being the only option for a C slot that could benefit the user in some way. Nowadays, Threaten skills are less common, but they can still be useful skills.

Threaten skills will debuff their respective stat on any enemy within two spaces of the user for five points. So if there was an enemy unit adjacent to an ally with Threaten Atk, that enemy would receive a five-point Attack debuff at the start of Player Phase. Very simple in design, with no other requirement for applying the debuff other than being within the required range.

While Threaten skills do have their benefits, they see a lot less use compared to other C slots nowadays primarily due to being a 200 SP skill. Many would also consider alternative C slots such as Drive, Tactic, and Ploy skills to simply be more useful. Still, Threaten skills will rarely be a bad choice for the majority of units, even if they can seem a bit lackluster or underwhelming compared to other options.

With the release of Brave Alm, 300 SP Threaten skills are now available, starting with Threat. Atk/Spd. Threat. Atk/Spd is strictly superior to both Threaten Atk and Threaten Spd, offering the same debuff as both skills combined while also buffing the user for five Attack and Speed. It’s safe to assume that future dual Threaten skills will follow the same pattern.

These dual Threaten skills look very good on paper, but still falter from the usual range problem that standard Threaten skills do. This means that even with the large increase to its buffing and debuffing capabilities, it can still be tricky to utilize, especially in modes like Aether Raids where you typically want to be able to apply debuffs during the turn.

Depending on the situation, Ploy skills can range from negligible at best to downright annoying to deal with. While Ploy skills can be powerful, they do have some punishing restrictions. Not only is successfully landing a debuff from a Ploy skill sometimes awkward, but they are also limited in usability by their activation clause with relegates their ideal usage to a small group of users: Those with high Resistance.

Ploy skills will debuff their respective stat on any enemy within cardinal directions to the user for five points as long as the enemy has less Resistance than the user. The most important thing to understand is what cardinal directions are. The cardinal directions are north, south, east, and west. In simpler terms, Ploy skills will hit enemies that are on the same row or column of the map as the user, presuming the other activation requirement is met. There is one Ploy skill that is different in both effect and activation requirement: Panic Ploy. This skill will be discussed on the page regarding unique C slots.

Ploy skills suffer from two main issues: ease of actually hitting your opponent and the activation requirement. While Ploy skills have an effectively infinite range within the user’s row and column, they require the enemy to be within that row or column at the start of your own turn. This means that one needs to predict where the enemy will be after their turn ends, or force them through a choke point. As such, actually landing them can be a pain depending on the map. The main issue though is the requirement for the user to have more Resistance than the enemy. This limits the usability of Ploy skills to unit’s with good Resistance stats in order to ensure the highest possible chance of activations.

With everything considered, Ploy skills can be hit or miss depending on the situation. In some maps and situations, they can prove to be very effective and absolutely useful. However, there are plentiful scenarios in which Ploy skills can be either difficult to use or downright ineffective. In order to get the most out of them even on bad maps, Ploy skills should be ideally utilized on Fliers if possible as they have the greatest mobility of all classes, allowing them the potentiality to Ploy from locations that are unreachable for other movement types.

Smoke skills can be extremely powerful when utilized correctly. While they do have their downsides, what they can offer is very beneficial, especially in Aether Raids.

Smoke skills will debuff their respective stat on any enemy within two spaces of your unit’s target after combat for seven points. Note that Smoke skills have no activation requirement other than entering combat, so they can be utilized on both Player Phase and Enemy Phase. The range and strength of the effect are the main draws to using Smoke skills.

The main issue with Smoke skills is that they don’t actually affect the target. While everyone within a 2 space radius will suffer a major debuff, the target will suffer no penalty at all. The requirement to enter combat to apply debuffs is also a downside in itself. These two downsides are notable but are not enough to subtract from the overall usefulness of these skills.

For Aether Raids, Smoke skills are amazing choices for your primary combat units. For tanks, they can make great use of Atk Smoke or Spd Smoke to bolster their own defensive prowess. For Blade tome mages and other Vantage units, they can make great use of Def Smoke and Res Smoke to increase their OHKO potential. The Smoke skills which don’t debuff stats, namely Pulse Smoke and Panic Smoke, are also highly effective choices for fighting certain team comps.

In other game modes, Smoke skills can still have plenty of use. As long as the enemy forces are grouped together, they can be utilized to good effect. However, maps with spread out enemy placements may be trickier to utilize Smoke skills on effectively.

Overall, Smoke skills are a highly desirable C slot choice, especially for Aether Raids. For your main combat units which will likely not needing to be giving out buffs to their teammates, Smoke skills are some of their best choices.

While still a Smoke skill at heart, Pulse Smoke is a unique entity within the Smoke category. This skill does not debuff any stats but instead pushes back the Special cooldown of affected units. Unlike the typical Smoke skills too, Pulse Smoke does affect the target.

Much like Witchy Wand, this skill can function as a counter to opposing teams that utilize Infantry Pulse. While Pulse Smoke is not as powerful as Witchy Wand on paper, the fact it takes the C slot and can be utilized by non-healers makes it a powerful option when face to face with an Aether Raids defense team with fully charged Specials.

Panic Smoke is in a similar situation as Pulse Smoke, as it is a unique entity within the typical Smoke category. Instead of applying a straight stat debuff, Panic Smoke applies the Panic status effect instead. Like with Pulse Smoke, Panic Smoke does also affect the target.

Panic Smoke simply adds to the multitude of options that any team has for applying Panic to the foes. For an Aether Raids defense team, Panic Smoke can allow you to forego the use of a Panic Manor or another user with a Panic weapon. For Aether Raids offense, it can allow the user to counter defense teams designed around everyone receiving large amounts of buffs. In either scenario, Panic Smoke is a strong and reliable option.

“Wait, does this mean that people will be looking at me?”
Everyone, quick - appreciate Olivia by staring at her! Yet another character that I…
Another Chibi Playhouse: Book III Edition
https://www.youtube.com/embed/vA2iPMVn3Kg Another cute play 16 posts -…
Summer 2 silhouettes (July ‘22)
46 posts - 20 participants Read full topic
Silhouettes (July 2022)
(topic deleted by author) 1 post - 1 participant Read full…
About the choice of heroes for Resplendent Attires
I really have to wonder. How come there has not been a single Corrin (female) yet? I…
Read More