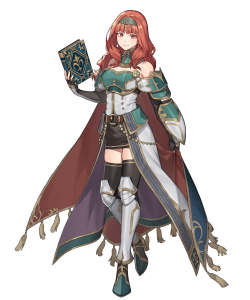 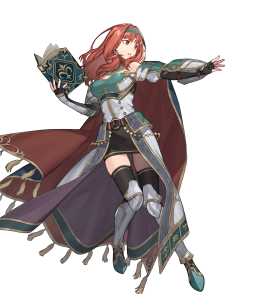 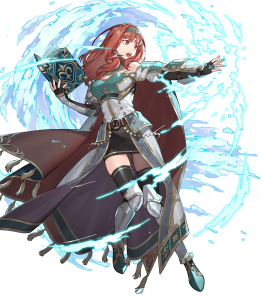 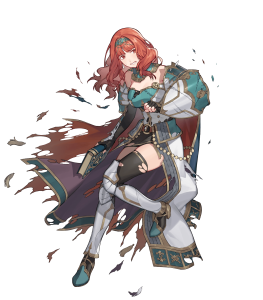 Celica’s Atk+Spd sum is the highest in the game at the time of writing, landing at a whopping 85 thanks to her 43 Atk and 42 Spd. As such, it comes as no surprise that her damage output and follow-up consistency are no less than first-class.

Along with the strength she gained along her journey, Celica carries Mila’s Testament, her incredibly potent personal weapon and a reminder of her ideals. Along with granting -1 Special cooldown, if Celica initiates combat or is within two spaces of an ally, she gains the following effects during combat:

Via in-combat buffs, guaranteed Special activations, and true damage, Celica’s Player Phase dominance is a sight to behold, as she can 2HKO much of the cast with relative ease. The icing on the cake is her pseudo-Miracle effect, which not only allows allies with Wings of Mercy to consistently teleport adjacent to her for one-phase sweeps and Galeforce strategies, but also ensures survival against most enemies and synergizes well with her other personal skill…

Original to Celica’s Legendary alt, Soul of Zofia simply combines Null Follow-Up and Desperation into one clean package, ensuring Celica makes full use of her excellent Spd by nullifying follow-up prevention or follow-up guaranteeing effects and allowing her to perform a follow-up before the enemy can counterattack if her HP is ≤ 75%.

Soul of Zofia is criticized for being rather underwhelming for Legendary Celica, so why does it work better for Ascended Celica? Unsurprisingly, Mila’s Testament is at the center of this; Legendary Celica’s Saintly Seraphim simply grants true damage equal to 20% of the enemy’s Res, while Mila’s Testament grants Slaying, +6 Atk/Spd, Guard nullification, true damage equal to 10% to the enemy’s Atk, and a pseudo-Miracle effect. In addition to simply having far better damage output, Ascended Celica can safely reach the ≤ 75% HP condition without needing skills such as Fury that compromise her offensive capabilities (compared to skills such as her native Life and Death 4) in exchange for recoil damage.

Quite literally Celica’s only weakness in her otherwise golden-standard initiator performance stems from units with Enemy Phase (or dual-phase) Brave weapons like Summer Edelgard, Altina, Winter Altina, Laslow, and many others. With enough firepower, these units can drop Celica’s HP to ≤ 25% on their first hit, then KO her on their second hit, as Mila’s Testament’s “Miracle” effect checks Celica’s HP on every attack as aforementioned. While Celica can circumvent this by replacing Soul of Zofia with Windsweep to prevent physical counterattacks altogether or using Hardy Bearing to disable Vantage strategies, these band-aid solutions come with their own problems that are generally not worthwhile. As such, Celica may need to rely on allies to shoulder the burden of units with this type of weaponry.