Community Posts with Keyword Ayra All 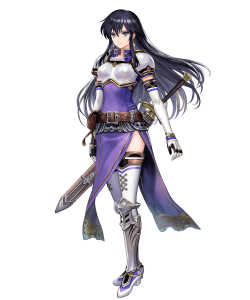 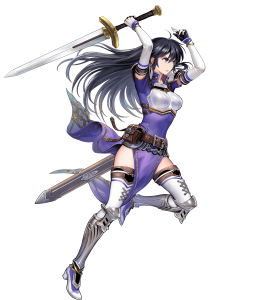 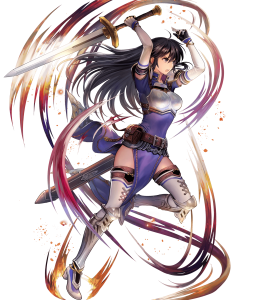 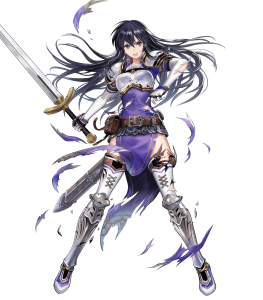 The original queen of blades comes back with a vengeance via the unique refinement upgrade to her aptly named Ayra’s Blade. It immediately draws parallels to the Creator Sword through its cooldown reduction and similar ability to nullify both Guard effects and enemy skills that hasten Special activations (e.g. Heavy Blade, Steady Breath, etc.), making Ayra incredibly consistent and hard to shut down through conventional means.

Although it lacks the Creator Sword’s inbuilt Null Follow-Up, Ayra’s Blade does its best to lessen the gap through a massive helping of stats—an impressive +3/+7/+7/+4/+4 stat swing in her favor to be exact. This allows Ayra to keep up with recent units despite her early release, especially when invested through Dragonflowers and merges. As a bonus, Ayra’s Blade also grants a reasonable 20% damage reduction from her foe’s first attack in both phases which, combined with her high Speed and access to further Speed-based reduction effects, make the warrior princess deceptively bulky.

Her initial claim to fame, Ayra’s access to Regnal Astra provides considerable burst damage potential due to its short cooldown and synergy with her high Speed. Regnal Astra may not necessarily be required for every build (as other Specials simply benefit certain playstyles more), but it’s always a nice option to have. Further, it does open up otherwise inaccessible venues like Aether Raids Defense viability.

Despite being one of the earlier sword units released, Ayra’s statline nonetheless is quite solid even by current standards. Although her Attack and physical bulk are respectable and don’t trail too far behind, her high Speed undoubtedly remains her statline’s main focal point and pairs excellently with both of her exclusive abilities to altogether grant Ayra great versatility.

Ayra greatly appreciates her infantry status due to the impressive array of skills it grants accessibility to, including but most certainly not limited to Null Follow-Up, Spurn, and Time’s Pulse. This quality further builds upon her sheer adaptability, as her specific build can easily be polished to best lend itself to one’s desired purpose

Ayra’s most exploitable weakness is her terrible base Resistance stat of 21. Although the impact of this can be offset somewhat by her weapon’s damage reduction and accompanying Resistance boost, she will still struggle notably against sustained magical pressure—especially AoE Special wielders—at lower levels of investment and/or support.

Disclaimer: This unit's statistics assumes having maximum merges, max Dragonflowers and S-Rank Summoner Support. The build this unit has is also for reference ONLY.

[ Overview ]
Offensive Player Phase Approach
This build aims to go all out offensive using Galeforce or Regnal Astra depending on your preference. As once the original "Speed Demon" in her utmost prime, she is still viable to this day, but requires tremendous amount of investment to compare to someone even her own daughter, Larcei, who practically surpasses Ayra in every aspect.

This is entirely up to the preference of the player themselves.

[ Special ]
Galeforce / Regnal Astra
Ayra has enough Speed to become a natural "Speed Demon", allowing her to run Specials like Galeforce with Flashing Blade in effect. Alternatively, if one does not wish to run Galeforce or she simply does not have it, Regnal Astra is still a viable option so that she may smite her enemies to oblivion.

While running Ayra's Blade and Regnal Astra is once her bread and butter build, it's not too great, but it's still mighty effective to this day. Also, when running Regnal Astra with a Slaying Edge+, you do NOT need to run Flashing Blade since it already has a very low cooldown count as is.

[ A-Passive ]
Swift Sparrow / Life & Death / Atk/Spd Solo / Brazen Atk/Spd / Flashing Blade
If running Ayra's Blade, it is recommended to run Swift Sparrow or other skills that boosts Ayra's Attack and Speed such as Fury, Life & Death or even Atk/Spd Solo. This assumes that they're Tier 3 or 4 depending on what you have available.

[ B-Passive ]
Desperation / Repel / Null Follow-Up
Desperation is the main go-to skill so that Ayra can get around her critical condition and still be able to take out her enemies in a single round of combat -- if there's a combat to begin with.

Alternatively, Repel can be a good option since it preserves Ayra's HP to some degree, but it shouldn't be relied heavily upon since there are naturally enemies who are on par or even faster than Ayra herself. Null Follow-Up is another viable option to get around Wary Fighter and Swordbreaker and weapon effects that prevents Ayra from making any follow-up, but this leaves Ayra extremely vulnerable to all sources of damage. So unless you have a healer on your team, this should be the last thing to run.

However, you can be cheeky to run Time's Pulse with Slaying Edge+ and Regnal Astra equipped so that you have an instant Special ready for pure devastation.

While Ayra can function perfectly well with or without a suitable C-Slot skill. However, her C-Slot is open to the preference of the player. Whether it is for Ayra's self-sufficiency or supporting her allies.

[ Conclusion ]
At the end of day, Ayra remains to be a strong threat with enough dedicated investment onto her. With Regnal Astra, she can easily remove a large amount of threats, including a good number of Blue units in the game. She will struggle against especially tanky Blue units, so it is ill-advised to so, unless they're low on HP.

Galeforce is a fairly strong option as it allows Ayra to have another turn of action, which is the sole intent of running Flashing Blade on her A-Slot or Sacred Seal slot, or even Ayra's Blade. Combined with Time's Pulse, it definitely opens up many new possibilities for her.

In comparison to her daughter, Larcei, Ayra pales in comparison due to Larcei's Edge being the better weapon of choice overall. Something that Ayra and her Ayra's Blade wished it had at the very beginning. One can hope that her eventual Weapon Refine will help change that for the better.

maximizing ayra's speed for best damage of regnal astra, you only need to survive the first encounter because after that you are unleashing the special in every round of combat thanks to special spiral and counting all of the skills she gets a +15spd and +15 atk when initiating, which kinda mitigates her middling atk. just be careful of very sturdy blue units like travant or forsyth

This build is built around Ayra's Blade's cool-down effect conditions, which requires that Ayra's speed be greater than her foes, and abusing it to proc Regnal Astra every time she attacks. While this isn't usually a problem for her with her base build (and it may not be for a very long time), this build has carried me through countless battles and functions as a deadly player-phase kit while compromising just a sliver of her enemy phase flexibility.

Reposition's use in this kit functions differently than in other builds that I have seen for Ayra. Being able to use allies as meat shields protects this vulnerable enemy phase unit, especially if said ally is a solid defensive unit, and is beneficial to making sure your Ayra will survive to player phase to body her foes in one fell swoop. It is also a near-universal support skill for Ayra builds and super cheap to obtain, so SP is not wasted on obtaining this skill should you go another route.

Darting Blow 4 (or Darting Blow 3 for a budget build like my Ayra, which otherwise follows this build) provides Ayra with an insane amount of additional speed in combat when added to her speed bonus from Ayra's Blade, and while it lacks the attack increase of Swift Sparrow 3, this kit is solely focused on building Ayra's speed - Regnal Astra will carry any lapse in attack prowess that may be induced by the absence of Swift Sparrow. Swift Sparrow 3 (or Swift Sparrow 2 for budget builds, which is in her base kit) or Fury 4 are also both fine alternative options if you have no qualms about sacrificing some speed (and Fury may help you meet your Desperation requirements).

Desperation 3, which comes in her base kit, makes her ability to basically always double (and, with this build, certainly always proc) all the more terrifying once player phase one is over - I can think of no alternatives to replace this essential skill, and since it comes on her as packaged it would be insane to swap it out anyways.

Threaten Speed 3 is easily the most flexible skill in the build - Speed Ploy, Odd or Even Speed Wave, Speed Smoke or any other such C skills may very well work in your favor. But, Threaten Speed is super cheap and sufficiently effective in sealing Ayra's advantage in the speed department when facing foes. A straightforward, accessible choice that compliments the build's needs.

Lastly, Phantom Speed 3 is the ideal choice for a Seal slot when making an Ayra of this build: its effect treats her speed as +10 higher when compared to another unit's for the purposes of skills and effects. This +10 bonus to Ayra's Blade's cool-down conditions ensures that Ayra procs Regnal Astra every time, no questions asked. If one absolutely wishes (or is doing a budget build), double Darting Blow or double Threaten Speed could both work, as could Speed Smoke. But Phantom Speed is optimized for this proc-focused build.

I will mention that my particular Ayra is +1 merged, has +6 Dragon Flowers, has a speed boon, and has my summoner support. While not having this may not hurt your chances of success with the build, it may be a personal advantage that I have been experiencing. I also want to stress that this kit is optimized by support with a team consisting of AT LEAST one solid refresher unit, to keep Ayra in player phase - or at least out of danger for enemy phase - as long as possible (I use a Ninian with a custom build), and giving the two units S support also goes a long way.

This is simply my Ayra. A non-attack bane would have been nice... but that would require a level of luck (or money) I do not have. She is sans-wrath for the same reason. 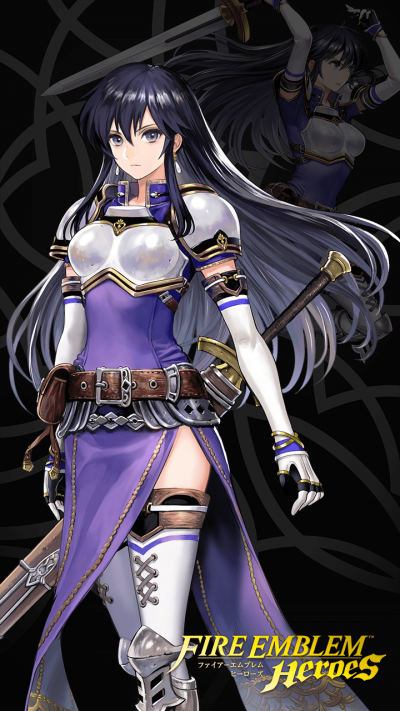