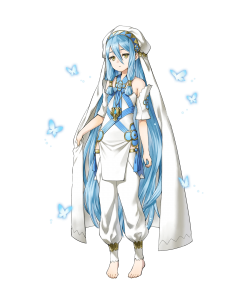 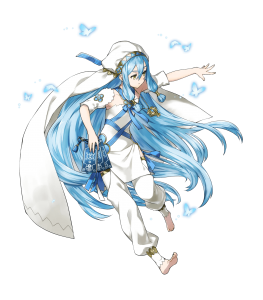 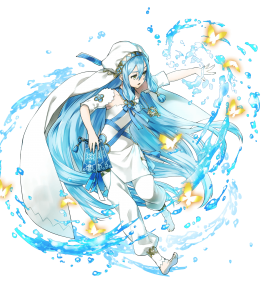 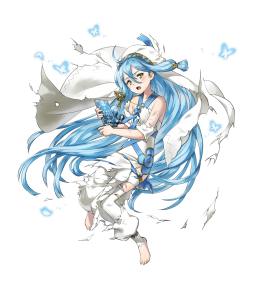 Azura’s best set optimises her for combat, enabling her to take the offensive against blue and green units. With this build, she can pick or choose whether she wants to fight or Sing, and be effective at both. It also leverages as much stat gain as possible to level the playing field between her and her opponent. With one or two exceptions, this set is rather cheap to build and also serves as Azura’s best budget choice.

The Book of Shadows is perfect for Azura, as it offsets a large part of her statistical penalty. Fury performs best in A slot, while Atk/Def Bond works very well in her seal slot, and shares the same activation condition as her Book of Shadows does. Moonbow is the best choice of Special, scaling well with Azura’s relatively low Attack.

Guard is one of the most important parts of this build, as it stops opponents from activating their Specials against Azura. Being so frail, she stands little chance at surviving enemy Specials. Wielding Guard greatly extends her survivability. The HP loss from Fury combined with Guard isn’t a problem, as Azura is usually only strong enough to beat one opponent per round anyway. If you’re looking for a budget choice, Wings of Mercy will give her a mobility boost and let her reach wounded allies much easier.

Atk Tactic or Odd/Even Atk Wave are her best C slot skills. Tactics are better in mixed teams, otherwise go for Odd Atk Wave. If she’s paired up with defensive units, Spur Def/Res works wonders and is a very good option for her.

Are you the kind of person who wonders why people bother to build refresher units offensively? Then this set is for you, as it maximises Azura’s ability to support allies with Sing. Thanks to Dance skills, Azura can boost up to three of her Sing target’s stats at once. This is a highly modular build, with many different choices based on user preference.

Dancer’s Ring is chosen for its Breath of Life effect, which enables Azura to take on a healing role if she chooses to attack her enemies. However, the Book of Shadows works well as a budget option. As for her A slot Skill Fury is the best general performer, but Triangle Adept is a very safe alternative that allows Azura to fight some colorless units well.

Where this set comes alive is in its choice of B, C and seal slots. Geyser Dance combined with Gale Dance allow Azura to buff an allies’ Speed, Defense and Resistance. And combined with an Attack buff in her C slot, she can provide buffs to all stats. Wings of Mercy is a very good alternative, especially if acquiring the rare Geyser Dance skill isn’t possible. Wings of Mercy is also better if you want to use Azura on your Arena or Aether Raid defense teams.

Atk Tactic or Odd/Even Atk Wave are her best C slot skills. Tactics are better in mixed teams, otherwise go for Odd Atk Wave. If she’s paired up with defensive units, Spur Def/Res works wonders and is a very good option for her. One option she has is to double down on Breath of Life, taking it in her C slot skill and seal to total +21 HP restored to allies. However, buffing Skills are still recommended, as they’re more reliable.

Great at support teams, due to Sing.

Azura is one of a lucky few units with access to Sing or Dance. Sing allows Azura to sacrifice her turn in order to refresh another unit who has already acted that turn. It enables some powerful strategies and for many, makes battles easier. Having Sing also makes her a good filler fourth unit, when the other three slots are filled with core team members.

High Attack for a refresher unit.

Base 33 Attack is nothing to write home about, especially for a unit unable to get an Attack boon. But in Azura’s case, she’s already providing value through Sing: Her combat potential is just icing on the cake. The Book of Shadows is a great tome for her, helping to alleviate her statistical penalties and fight on even ground. Azura can build offensively to smash foes, although she’ll need some buff support to perform well.

Azura’s most obvious weakness is her low stat total compared to other units. Her stats total 140, almost 40 points lower than Legendary Tiki or Halloween Myrrh. She simply lacks the raw stats to scrap with other units on an even footing. Azura’s 17/25 Defense and Resistance isn’t nearly enough to survive common neutral damage. And while she can fight well when supported, the same support offered to other mages will still produce better results. On Azura’s combat set, she must dedicate many Skills to offsetting this weakness.

Can fulfill two roles, but not on the same turn.

Azura’s biggest claim to fame is her dual role as both refresher and ranged attacker. The problem with this, is that Azura needs to use her turn to do both of these things. If Azura uses Sing on her turn, she won’t be able to initiate combat, and vice versa. Building her to fight on the enemy phase is also not a good idea due to her poor HP, Defense and Resistance.

A fairly high investment build but useful nonetheless. Gronnfox+ beats Book Of Shadows in every department except the extra stats. If it's too much investment you can easily stick with Book Of Shadows however. GDI4 is again very high investment, but having the extra stats and arena scoring utility makes her potent. Wings of Mercy is the standard refresher B slot. Joint Drive Attack is excellent on her as her offensive capability increases as does her allies. The goal with this build is to utilize Y!Azura's stats and status as a green infantry refresher to provide a niche over her direct comparison in PA!Inigo. PA!Inigo goes more in the way of support whereas Y!Azura goes more offense. Not so much more however, as her stats are still fairly meager and she definitely struggles against DC units. But being able to give her turn to someone else is excellent for that purpose.

Pair with Legendary Marth. Make a enemy faze unit. #SaveThoseGreils , use 10 dragonflowers. If you’re going to go through all this trouble you better be willing to summoner support her. I suggest using distant defense 3.

Currently at +2, the idea behind this Azura was to lean into her weapon’s, Book of Shadows, ability that activates when she’s next to an ally. Thus, I kept the inborn Spd/Res bond, added in Blue Flame as her special, which adds 25 true damage when her special activates, and Hone Speed, which helps out her allies. This allows her to both dance and buff her allies, while allowing her to take down mages or non-distant counter enemies when necessary.

IVs: N/A
This build aims to maximize Y!Azura's damage output by optimizing her passive skill loadout to synergize with Book of Shadows.

Book of Shadows is used to debuff the opponent in combat, which, combined with Atk/Spd Bond 3 in the A slot and Atk/Def Bond 3 in the S slot, gives her +14 Atk and +9 Spd and Def. Spd/Res Bond 3 can be used as a budget option but it reduces Y!Azura's ability to ORKO some threats.

Due to the opponent's defense being debuffed, it is ideal to use Glimmer on this build as it takes damage from your own damage rather than your opponent's weakened defense and resistance. Combined with Y!Azura's respectable Atk stat she becomes more viable with Glimmer.

The B and C slots are the most flexible parts of this build as they focus on supporting the team. Quick Riposte 3 is a decent option as a way to patch up Y!Azura's mediocre Spd. While she does hit 38 Spd with Book of Shadows combined with Atk/Spd Bond 3, it may not be consistent enough to double opponents. Alternatively, Wings of Mercy 3 is always good on singers and dancers, and Bowbreaker 3 is especially useful for surviving Brave Lyn, who has shot her way back into relevancy through Aether raids.

Drive Spd 3 is always good for Y!Azura so she can better support your team, but you can customize it to whatever fits. Close/Distant Guard 3 can help with dedicated Enemy Phase units on your team, Tactics can work on a mixed team, etc.

The core of the set is Book of Shadows, Sing, Glimmer. A-slot Atk/Spd Bond 3, S-slot Atk/Def Bond 3. Provided you're running that core, everything else is customizable. What you have there will work.

Other notes: Due to her low BST, Y!Azura appreciates Summoner Support to help her nuke opponents and avoid doubles. In addition, with the advent of heroic grails, Y!Azura becomes a much more viable prospect with the ability to get to +10 faster than her limited counterpart, Inigo.

Mainly I use her to buff Ylgr, making her insanely fast and able to tank most return hits.

I gave her Draconic Aura because it capitalizes on her ATK stat.