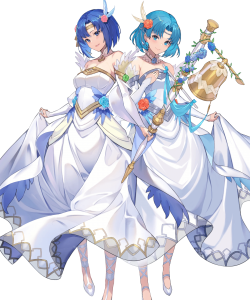 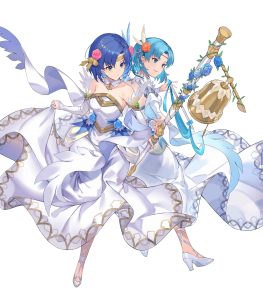 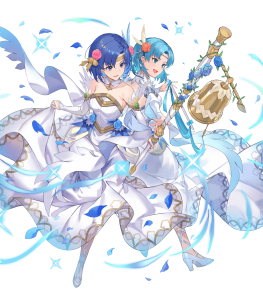 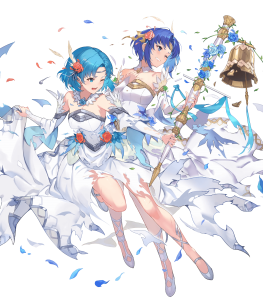 For Whom the Bell Tolls (Aether Raids Defense)

Passive B: A/D Near Trace

Passive B: A/D Near Trace

Coincidentally, the Azure Wing Pair has the same 67 physical bulk that Catria and Thea have individually. While 67 is not particularly special, it is usually sufficient for surviving at least one physical attack.

However, it should be noted that the Azure Wing Pair should be initiating for a vast majority of their combats, and given their【Triangle Attack】and【Desperation】effects from Wedding-Bell Axe and their Harmonic Skill respectively, they will oftentimes KO before receiving a counterattack anyways.

The middle Whitewings steal the show (wedding?) partially due to their personal weapon, the Wedding-Bell Axe.

This Axe is quite the doozy, as it greatly enhances the mobility and combat potential of both the Azure Wing Pair and their allies.

On a lighter note, they look so happy, and their Harmonic conversation was really cute, too. :)

Flier status is nicer than many players give it credit for; superior mobility is very beneficial for Player Phase movement, whether that be for going on the offensive and initiating against faraway enemies or going on the defensive and retreating to safety. Since Fliers do not receive movement penalties from and are able to move through trenches, rivers, lava tiles, and forests, they can grant their team much-needed flexibility and maneuverability.

Catria and Thea also have access to skills such as their native A/D Near Trace and Spd/Def Rein to further cement their offensive capabilities and, for the former, allow them to move after combat for even more flexibility.

Fantastic hybrid of combat and support

All of the above strengths make the Azure Wing Pair a relatively rare case of a hybrid unit that performs exceedingly well at both combative and supportive roles simultaneously. They provide incredible mobility and combat buffs to both themselves and their allies (specifically those from the same game as them in the case of their Harmonic Skill), making them a fantastic member of nearly any team composition.

While not a testament to their performance, Catria and Thea have an optimized base kit that, for many players, requires very little change. This is very convenient and appealing for newer players or players that are unable to fodder expensive skills.

Catria and Thea are two of the few Pegasus Knights in FEH that have higher Defense than Resistance, and that trend continues even when they are together. With only 63 magical bulk, they are prone to being OHKO’d by magical enemies, especially given that their Green color gives them weapon triangle disadvantage against Lysithea, Brave Lysithea, Summer Byleth, Fallen Julia, Legendary Lilina, Morgan (M), Fallen Morgan (M), Idunn, and Spring Idunn, some of the hardest-hitting magical enemies in the game.

As mentioned previously, however, the Azure Wing Pair should be initiating rather than defending most of the time, so lacking magical bulk is not a detrimental weakness.

Not even the best Whitewing pair can escape their Flier woes. While lacking access to Null Follow-Up is not as detrimental as it could be thanks to their【Triangle Attack】effect and Harmonic Skill, there is no guarantee that either will be active at any given time.

Lacking access to the Spurn family of damage reduction skills and needing Iote’s Shield to prevent them from receiving effective damage from Flier-effective weaponry makes an Enemy Phase set undesirable for Catria and Thea.

However, this isn’t to say that the Azure Wing Pair is a mediocre unit outside of their Harmonic Skill. Their aforementioned Wedding-Bell Axe and outstanding offensive potency make them incredibly powerful for both combat and mobility purposes.

Grants the following effects to unit and allies from the same titles as unit for 1 turn: 【Resonance: Blades】,【Desperation】, and "if unit initiates combat, unit makes a guaranteed follow-up attack."

【Desperation】 Grants the following effect for 1 turn: "If unit initiates combat, unit can make a follow-up attack before foe can counterattack."