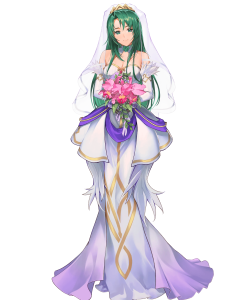 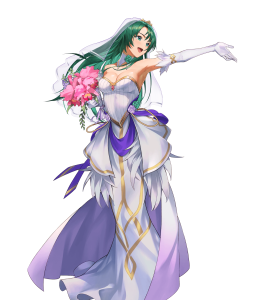 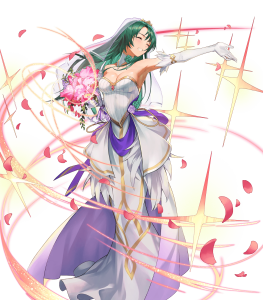 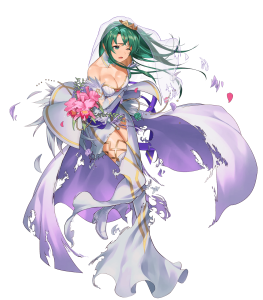 Sticking to the trends seen in many red tome cavaliers before her, Bridal Cecilia features a statline readily specialized towards both dealing and soaking magical damage: with 41 Atk, 38 Res, and four-point Assets available in both, the Etrurian Bride should have little difficulty in striking through enemy health while remaining relatively healthy against opposing mages.

Having access to an effective five-tile range by merit of being a cavalry unit inherently cements Cecilia as a solid, far reaching threat, and this is further complemented by the class’s access to the useful Lull and Far Trace lines of skills — altogether, at least where frontline combat is concerned, this means Bridal Cecilia is in a pretty okay space.

Bridal Cecilia’s disappointing (but expected) base Def of 18 renders any sort of physical attacker crippling even with only one strike — and with only 25 Spd to rely on, tanking such threats in any capacity flies entirely out of the window for the poor bride-to-be. Such low Spd may potentially make soaking sources of magical damage risky at times as well despite her impressive Res, as most mages will have little trouble performing follow-up attacks for free to charge up deadly Specials.

Despite how pretty she may be (and she really, really is), Bridal Cecilia, unfortunately, finds a hard time finding her place in the current landscape of the game in essentially any competitive facet. With an awkward stat distribution and lack of exclusive features to make up the difference, it takes a considerable investment to raise Bridal Cecilia’s performance up to what can be considered par — and even then, she remains extremely outclassed relative to more powerful contemporaries who do have such features, like Legendary Lilina, Valentine’s Líf, and Eirika. Outside of favoritism, this can make it hard to justify allotting that much investment or time into Bridal Cecilia to begin with.