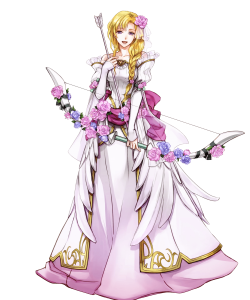 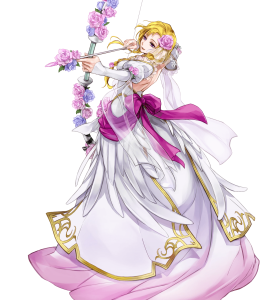 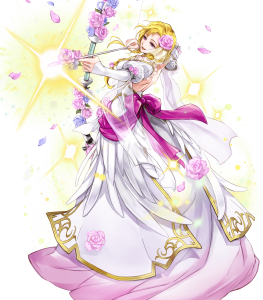 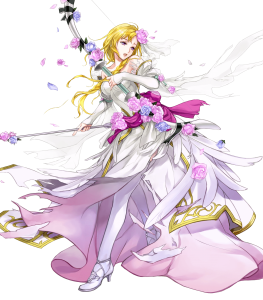 Bridal Louise’s base offensive stat spread of 31/34, albeit not particularly exceptional, is respectable enough such that she can perform satisfactorily as an offensive nuke when capitalized on with the proper set-up and support.

Her good base Resistance stat of 30 lets her make good use of Ploys to enhance both her and her allies’ overall performance. In addition, combined with her surprisingly high amount of HP relatively speaking, Bridal Louise possesses the ability to take up the mantle of solid anti-mage unit if necessary.

As a cavalry unit, Bridal Louise is able to benefit from a number of key strengths, most notable of which being her access to class-exclusive buffs and exceptional mobility.

Despite her relatively high HP pool for an archer, Bridal Louise’s physical bulk is downright terrible. This makes it absolutely pivotal that she be kept out of harm’s way from opposing physical attackers in the Enemy Phase as she risks being flat out OHKO’d by such foes otherwise.

In addition to being weak against cavalry-effective weaponry as well as unable to traverse certain terrain, Bridal Louise is disallowed access to a variety of different skills, limiting her overall potential greatly.

This is a perfect build for Bridal Louise. Here is the outcome of this.

This is the build I'm currently using BB!Louise and it has worked very well. She's very much a player phase unit and fills her role well with a lot of investment. The idea is to stack up her attack and speed as much as possible. Iceberg works as a good special for her, as it will proc sooner than glacies and give her that extra damage. Deadeye is also good for her.

This build is meant to capitalize on her Bouquet Bow's Swift Sparrow effect. The +Atk refinement is only for more raw damage output, and can be changed to +Spd or another refinement if desired.

- Assist: Reciprocal Aid here can be used to switch an ally's low health with her own, effectively letting her hit Desperation's HP threshold without having to risk combat first to do so. This was a more personal choice, and can definitely be swapped for things such as Reposition, Draw Back, etc.
- Special: Glimmer for purely damage and a low charge. Moonbow & Luna can be used as alternatives.
- A Skill: Swift Sparrow 2 combined with her weapon's own Swift Sparrow yields a +8 Atk/Spd bonus if she initiates combat, letting her double a fair amount of heroes even with no prior Spd bonuses. Atk/Spd bond & Darting Blow can possibly be used as alternatives.
- B Skill: Once in range for Desperation, she will also have Brazen Atk/Spd activated. All together, if she initiates combat, she'll have +15 Atk/Spd bonus in conjugation with Desperation, likely allowing her to double at about 49 Spd + 58 Atk with no outside buffs/debuffs.
- C Skill: Hone Cavalry is just used for helping out Cav teammates here, but if there are none or the skill just isn't needed, a Smoke skill, different Hone/Fortify skill, or Tactic skill would work best.
- Seal: Brazen Atk/Spd adds almost as much as the doubled Swift Sparrow effects once Louise is in HP range for it. As previously stated, this works very well with Desperation active. Alternatives would likely be a different Brazen skill (would only lose the Spd bonus), Smoke skill, Tactic skill, or even Quickened pulse to activate a 2-charge special through early Desperation or against an enemy that can't counterattack.

Type "Fire Emblem" then your username. Post the first image that pops up, GO!
I’ll start! 34 posts - 24 participants Read full topic …
Future Harken GHB?
For those that played FE7 and Know of Astram, Harkin is basically Astram in that game,…
Feh Manga Update (The Tempest)
image1556×2329 396 KB @LiesLiesLies for the Berkut 26 posts - 12…
A guide on how to clear the Training Tower quests without being a bore
Every beggining of a month, I see players arguing about how tedious it is to complete…
Help with aether raids
Guys anyone can tell how i can counter this team? The team composition is a brave…
Read More