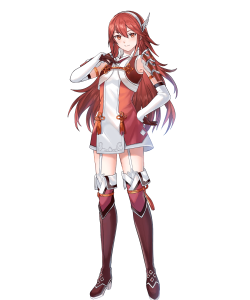 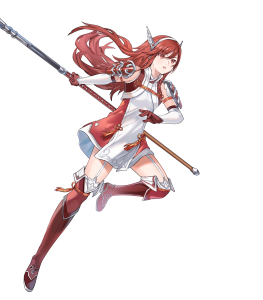 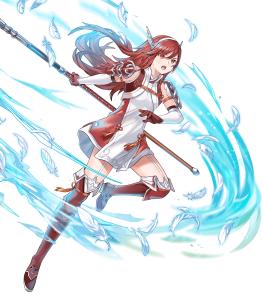 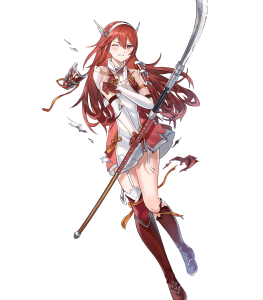 No Chance, No Way (Galeforce)

Passive B: Wings of Mercy / S/D Near Trace / Dive-Bomb

I Won’t Say It, No, No (Defensive Generalist)

At Least Out Loud… (General Offense)

The most immediately alluring aspect of Caeldori’s Prodigy Polearm lies in its access to a complete Null Follow-Up effect — a surprising rarity among newer units who typically only feature partial access — for the simple condition of maintaining higher than 25% HP. While perhaps somewhat boring (especially given the introduction of the Null Follow-Up Seal), this is a fantastic effect as it immediately provides Caeldori with a strong baseline for generalist purposes and shuts down so many effects that remain rampant in the current meta. This is not to mention that fliers otherwise cannot access Null Follow-Up — the closest is partial NFU only during the Player Phase through Flow skills — so this already gives Caeldori a leg up.

This is similar to Kjelle’s Heartbeat Lance for those familiar, but works differently in that it allows Caeldori to perform much better against opponents she’d otherwise be disadvantaged against or have a hard time getting a leg up on. The fact that the debuff scales on her pretty high Spd also makes the effect pretty consistent, with the maximum 35% debuffing her foe’s Atk and Def by an easy 15 points for greater overall survivability and damage — however, this is only at base and may be increased further through IVs, merges, visible buffs, and more.

By merit of an astonishing 184 BST, there’s very little to complain about Caeldori’s statline: a base Atk/Spd combination of 40/44 is excellent for offensive play, and these high values don’t cause her defenses to suffer much either with a reasonable 30/31 Def/Res. She’s very well balanced and while none of her stats have a particularly “wow” factor compared to other similar units, this works in her favor in increasing the chances of inflicting stronger debuffs through Prodigy Polearm while still having competitive stat values.

Caeldori’s flying status is a notable benefit when adopting more aggressive approaches, wherein she is able to maximize her flexible mobility and her access to an assortment of Player Phase heavy skills (e.g. S/D Near Trace, Dive-Bomb, Aerobatics, etc.). However, her flying status also grants a few generalist options that come in handy for overall use, such as her native Atk/Spd Catch and Atk/Spd Hold for easily obtainable stat swings for practically free.

The main knock to Caeldori’s performance unfortunately remains the overall limitations of the flier class as a whole. From the everlingering threat of a very common source of effective damage in archers to the sheer lack of better skills available to others (most notably being the Tempo and Bulwark lines, but also including options like Spd-based damage reduction and Special Spiral 4), Caeldori’s overall potential is held back compared to if she weren’t mounted.