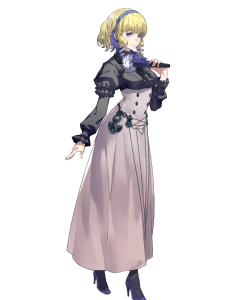 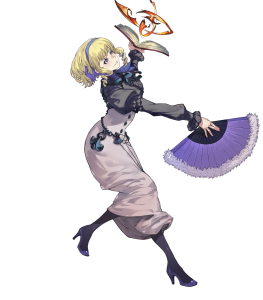 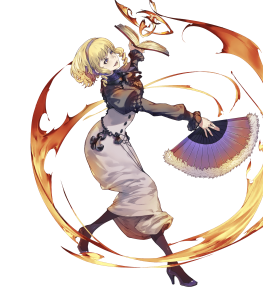 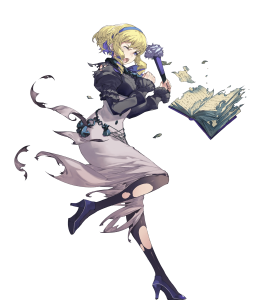 A noble of the renowned House Nuvelle must reach the expectations of her future denizens, so Constance boasts an incredible 42 Attack and fantastic 40 Speed. With high raw damage and follow-up consistency, Constance is a potent offensive force.

While not great, 39 HP and 29 Resistance sum to 67 magical bulk, which can typically suffice for surviving one magical attack.

Constance loathes the blistering sunlight, so she naturally could not let her summer professor’s Sun’s Percussors outmatch her without a fight. Her personal weapon, Agnea’s Arrow, has the following effects:

With Constance being strikingly similar to Summer Byleth (F), it is natural to compare their weapons. While Constance loses in that she trades -1 Special cooldown for +3 Speed and does not neutralize effects that guarantee the enemy’s follow-up attack, she wins in that her conditions are easier (initiate or within 2 spaces of an ally vs. foe’s HP = 100% or visible Speed > enemy’s visible Speed), she gets an additional +1 Atk/Spd, she neutralizes the enemy’s visible Spd/Res buffs on odd-numbered turns, and she neutralizes her visible Atk/Spd debuffs on even-numbered turns. Which one is better is largely circumstantial, but regardless, both are very strong and make their respective wielders powerful meta units.

Access to mobility-centric Skills such as Aerobatics, Ground Orders, and Guidance boost Constance and her allies’ flexibility and range. Meanwhile, access to the Far Trace family of Skills (such as her native A/S Far Trace or S/R Far Trace) increases her combat capabilities and allows her to move using her remaining movement after her first initiation of each turn. Finally, Rein Skills (particularly her native Spd/Res Rein) inflict in-combat debuffs on enemies within 2 spaces, which can be both helpful to both Constance herself and her allies.

With only 39 HP and 17 Defense, Constance is prone to being OHKO’d by enemies that target her Defense regardless of their color. As such, she should be kept away from these enemies on Enemy Phase and use Windsweep (or Watersweep against Dragons) to prevent them from counterattacking on Player Phase.

Not even the elegant and righteous Constance can avoid the woes of being a ranged Flier. While lacking B slot options is not as impactful because Agnea’s Arrow naturally leans her towards using Windsweep or Watersweep anyway, being limited to those and Far Trace Skills is quite suffocating nonetheless. Additionally, taking effective damage from Flier-effective weapons will all but ensure that Constance will fall and not get up this time.