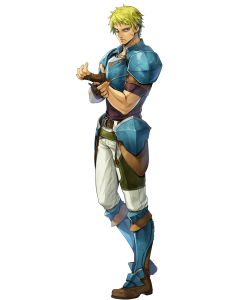 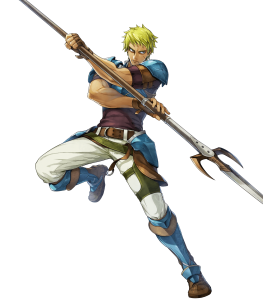 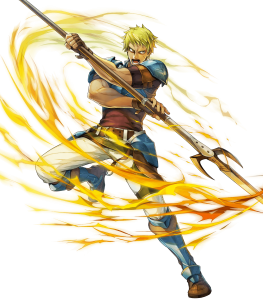 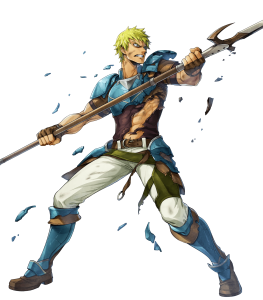 Nothing Else Matters (Player Phase Galeforce)

A popular hero from Fire Emblem: Sacred Stones, Cormag finally makes his first appearance in the game, though not in a form that some may have hoped for. While he boasts a vastly improved statline over many other blue lance fliers, he lacks a prf to set him apart from the group. This ultimately dooms him to be little more than a sidegrade to his rival Valter and forces his fans to get a bit creative with his application.

However, Cormag is still a hard hitting unit with a markedly solid statline. His improved Resistance over Valter grants him slightly more ability to engage with manaketes and his improved Defenses over fliers like Sumia, Cordelia, and Thea allows him to play a little more dangerously, with less need to bother with Firesweep sets.

One thing that Cormag fans can be happy for is that he’s freely available to all. Being a lance flier, he’s fairly versatile, and with his statline, he can make many ‘budget’ builds work for areas like AA - Slaying Spear, Ridersbane, or Wagasa are all options that will allow him to excel in a niche.

While it’s easy to be disappointed that his statline doesn’t offer him anything particularly unique, the balance of Cormag’s stats allows him to excel over his peers in small and unexpected ways: his bulk allows him to run more brawling sets, while his Speed allows him to avoid doubles from the middling Speed tier, and his impressive Attack grants him access to specialized Heavy Blade or Brave builds.

Outclassed by Units With Prfs

Unfortunately, Cormag is stuck in one of the most highly competitive groupings in the game: Blue Lance Fliers. With no prf to grant him a unique playstyle or set him apart from the herd, he’s simply middling in that group, even falling below units with worse statlines than him, such as Catria, Clair, and Shanna.

All fliers have an inherent weakness to bows and Cormag is no different. The tragedy of bulky fliers like Cormag is that their bulk is essentially mitigated against a core weapon type in the game, granting him a huge disadvantage when compared to units like Lukas, who have no such weakness.

This build makes it so that no matter what any unit that attacks him (or he that he attacks) will receive any stat bonuses during combat. Also, it’s primarily a defensive build which relies on his lackluster attack being supplemented by his high defence stat. Essentially you want Cormag to counterattack with as much strength as possible. Using distant defence could also be used so he has higher survivability against mages and bow users.

Cormag is a defensive Cordelia in the sense that he loses a bit of speed and also strength due to the lack of Iv´ &amp;#039;s but makes up for it with superior physical durability.

In terms of battle performance, they are quite similar using offensive player phase builds, slaying spear gives Cormag a niche against the ever-growing armor units and thanks to his defense and hp he can take a physical blow from about everyone while having the life and death endurance penalty.

Cordelia can run the same build except that she would prefer a chill def over speed because she already is quite fast.
Between Cordelia and Cormag, the first will have always slightly more kills while the second will have fewer loses thanks to his higher bulk.

(It used to have chill spd and SS sturdy blow but after testing in actual combat I think that he can allow himself to have 40 in EP in order to have a more consistent speed in his player phase and desperation gives him more utility after his first combat when you don&#039;t bring a dedicated healer).