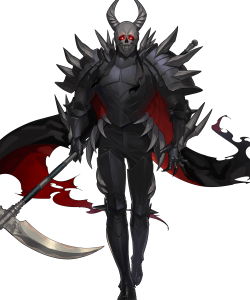 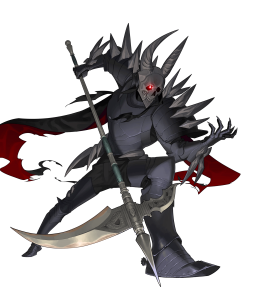 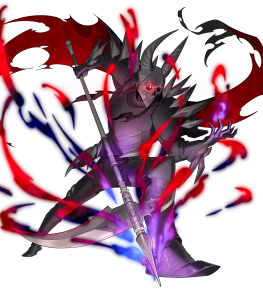 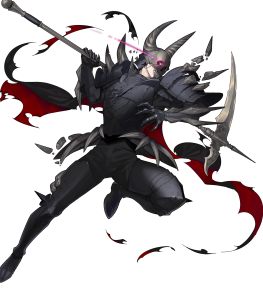 Do Fear The Reaper (General Tank)

Death Knight benefits from an overall good stat spread. Offensively speaking, he has a solid 35 Attack which makes him strong on the attack. Defensive, he has a strong 40 HP, 30 Defense, and 27 Resistance which makes him tricky to take down, especially when Scythe of Sariel activates.

Scythe of Sariel is Death Knight’s personal weapon. While functioning like a Slaying Lance by reducing Special cooldown length, it also debuffs the foe in all stats and prevents them from performing follow-up attacks. However, this debuff and prevention of follow-up attacks only occur when the opponent has a visible buff or movement buff present.

The requirement Scythe of Sariel has is by far Death Knight’s greatest hindrance. The reliance on the opponent being buffed makes it inconsistent as best as it’s very easy to be facing enemy AI that are not buffed. This severely limits Death Knight’s usability in many PvE centric game modes.

One place where this requirement is less of a hindrance and arguably more of a benefit is when Death Knight is used on an Aether Raids defense team as he can act as a great deterrence to any attacker that relies on visible buffs.

The one main weak point in Death Knight’s stat line is his Speed stat of 25. When Scythe of Sariel is not active, his low Speed makes it easy to perform follow-up attacks against him. Furthermore, he is reliant on skills such as Quick Riposte in order to ensure he achieves follow-up attacks.

A fun build where brash assault actually works well. Paired with Fallen Berkut to fall into range of brash assault he'll be sure to kill with bonfire with his follow up attack. In personal use I've paired him up with Kaden to reach plus 20 atk and def since I lack a Fallen Berkut. But again just a fun build to try out with him.

"Death comes for all. No matter how prepared you think yourself to be. No matter how impenetrable your defenses. No matter how sharp your blade. The Reaper will come to collect. And those who seek to bolster themselves for fear of death will find themselves brought to their knees with insurmountable force."

This build aims to weaken and punish nearby buffed enemies. Scythe of Sariel buffs all stats against buffed enemies and Dull Close 3 nullifies any stat buffs on melee enemies, making it easier to finish them before the can counter. The Threaten Atk/Def combo helps to weaken nearby enemy defenses and reduce any incoming damage. Finally, Heavy Blade 3 helps make Galeforce much more available, allowing DK to mow through multiple enemies at a time.