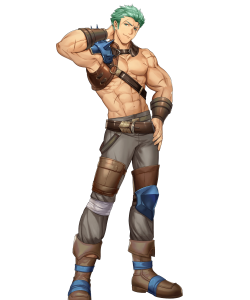 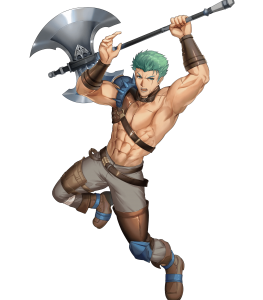 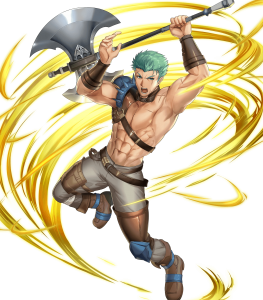 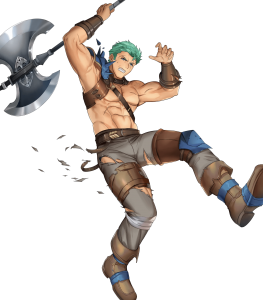 Rather Dieck Move If You Ask Me (Aggressive Attacker)

It's Always Dieck With You Darn Twinks (Distant Tank)

Dieck's unique weapon is his main point of notice, as it potentially puts a lot of previous competitors out of the limelight with just how simple but effective it is. For the mere condition of either:

...Dieck benefits from a beautiful spectrum of additional stats +5, fortifying his already-impressive non-HP stats. Additionally, the axe also grants permanently reduced cooldown -1 and a guaranteed follow-up attack (assuming you fulfill the above conditions). Both are always nice to have given the demand for more potent Specials and pseudo-immunity to Impact skills in fast-paced competitive settings.

For offensive stats, Dieck sits on an amazingly competitive base 40 Attack—which only becomes significantly stouter by 4 points if you're lucky enough to pull a copy with an Asset in that—and 35 Speed which is still quite decent by today's standards. His defensive stats also all sit at rather simple but more-than-functional values—his high base 36 Defense, in particular, gives him the ability to duke it out consistently with hardy physical enemies. When you consider the additional in-combat stats his weapon grants, Dieck cements himself as a rock-hard unit all-around.

Dieck has his ever-great infantry status to thank for access to potent exclusive skills, including his native Null Follow-Up, Spurn, Repel, Time's Pulse, and more. Additionally, he benefits from exclusive ally support skills such as Geirskogul, Infantry Rush and Infantry Flash, all of which just happen to synergize with the nearness effect of his axe.

40 HP is considered an absolute minimum when it comes to modern-day tanks, and Dieck, unfortunately, scratches that iota. Thus, the amount of punishment he can take overall is rather limited without the help of blessings and sustainability-focused skills. Furthermore, while 25 Resistance is pretty decent for Dieck's archetype, this, too, also tends to put a damper on stronger magical matchups in spite of Tiger-Roar Axe's stat boosts and other skills.

Dieck's base 35 Speed can be built upon to be improved, but it's only rather decent by this time's standards and can be exploited by a fair number of faster mage and/or Red units in the game.

If you've already invested in fellow axe infantry units such as Ross, Echidna, Legion, Osian, Valentines Alm, and more, it can be a bit difficult to notice Dieck as his playstyles tend to homogenize with theirs with mixed results.