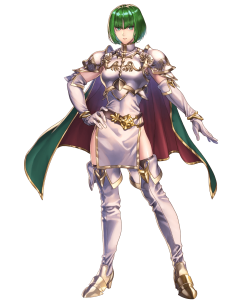 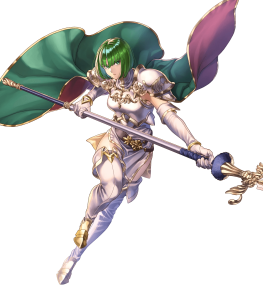 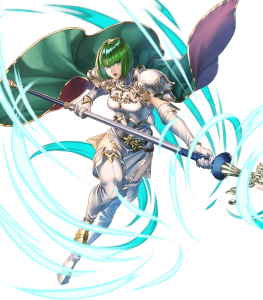 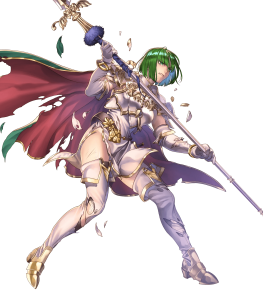 From a stat-only view, Díthorba can be seen as a directly improved version of Cordelia, Clair, and even Fiora (except for the slight Resistance drop) before her. This is thanks to her improved base stat total afforded by being a fifth-generation flier, with much of the distribution being poured into her Attack, Speed, and Resistance. As a result, Díthorba can play the role of either a hyper offensive lance flier or magic tank or mixed phase bruiser quite well.

Being both a lance user and flier grants Díthorba a nice list of perks exclusive to her, including a colorful variety of great lance weapons and some neat flier-exclusive skills, especially Pegasus Flight — it should be noted she's one of the few who actually uses it well. Additionally, unhindered mobility over terrains such as mountains and trees is always a good advantage in obstacle-heavy maps.

Fortunately, having 'orb' in your name doesn't mean the end of your balance; rather, the Cutting Knight can be freely acquired through her Grand Hero Battle as well as Heroic Grails.

Let's be real, 23 Defense is not a great thing to have on a melee unit in 2021 and onwards. It makes natural melee matchups with even Sword units awkward and disadvantageous overall, while making her survivability against fast and powerful daggers — and let's not even mention bows — suspect at best.

Boosted effective damage from bows is something Díthorba definitely does not appreciate being a flying unit, and given her awful defense, it's not exactly hard to take her out with almost any old archer unit. Additionally, though her flier status grants her some neat tools, it doesn't fold too well in the skill inheritance department as she is lacking in good skills like Null Follow-Up or Special Spiral.

Though Díthorba can definitely be molded into a solid competitive pick, it can be a bit difficult to justify using her as other units min-max their stats (versus her good Atk/Spd/Res balance) and/or have unique skills that punts them up several notches in value. Of particular note is Cordelia, who is a popular choice as an offensive flier still due to her easy-to-summon availability (getting copies of Díthorba takes time, and Heroic Grails is a precious resource best spent on things you absolutely want to invest in) and hard-to-beat damage output thanks to her unique weapon.

Although she's a generic lance flier without a prf weapon, she works as a great template with an excellent stat spread. Rein atk/def or spd/def would be a better C slot but I simply lack them.

I done goofed
Let it be known that today Peaches fucked himself in terms of resource management…
What vibes do you give? (FEH edition)
Heloo people on there I saw some time ago a meme about people telling you what vibes…
"I'm going to dance the living shit out of you" - The omega dancer Berkut +10 waltz dancing on enemies graves
Is he shit as a offensive unit, will I change his build back to a support dancer, is…
Oops all blue
Today I saw the fact that I have a ton of blue units Basically it’s blue>red&gt…
Who Should Eat The Flame God's Carcass?
Got a Muspel and he’s gonna die but which little dragon girl should eat him? Nowi …
Read More