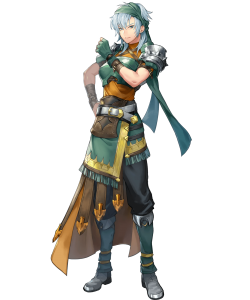 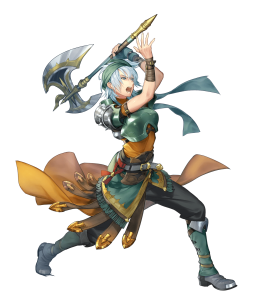 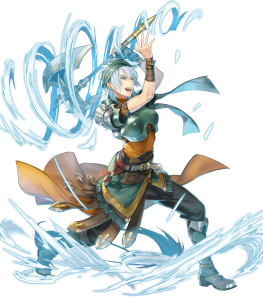 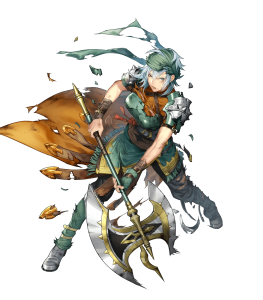 Goddess of the West (Defensive Tank)

As far as axe infantry go, Echidna has a fair amount of competition from units like Raven, Gerik and Ross. Thankfully, she isn’t heavily outclassed by most of them and can hold her own. Echidna has decent stats across the board and no clear weaknesses; this allows her to fulfill pretty much any role though she excels at focusing at one or the other.

However, Echidna’s well-rounded nature means that she falls behind when compared to hyper specialized units, particularly if they have strong unique weapons like Hilda or Brave Ike. Overall, her strong statline makes her a decent option for multiple roles, even if she is overshadowed in some cases.

Thanks to her fantastic 172 BST, Echidna has no clear weaknesses in her statline and can fulfill a wide variety of roles.

As an infantry unit, Echidna can supplement her strong stats with powerful infantry-exclusive skills like Null Follow-Up or Null C-Disrupt.

Despite Echidna’s raw stats, her lack of access to a unique weapon makes it rather difficult for her to keep up with many other units whose weapons give them powerful and unique capabilities.

In all seiriousness tho, she hits like a truck! If you really are tired of Surt'r this will help you alot (or any broken armored unit)
Flashing blade is there for consistent luna and rouse for bounus doubler, you can always replace the rouse with a smite bot if you want but yeah. That is about it
Hope the 1 person who might try this will have fun!

This is an expensive enemy phase unit that tries to tank to her best. Using her would be best with some support in the back just in case.

Rearguard+ (+Res) makes her be able to have more resistance than she already has, and with the added defense when an enemy attacks can be great.

Everyone can be great with Reposition, so it’s just nice to have.

Aether is meant to have her be healing without any help to back her up.

Steady Posture 3 is to cover her okay speed stat, and hit her with more defense. With the guard effect already on the skill makes it very convenient to go at it with a scary enemy unit.

Repel is a very hard to come by: however if you do manage to get it using it on her will be great. With her nice speed and decent defensives this makes her a good candidate for using the skill. This skill also sinks well with any kind of healing specials; getting low damage then hitting back to full health.

Rouse Spd/Def is to make her feel more durable during combat, and be able to have buffed up stats. Since most units are getting scary with their speed, having that extra bit will help a lot to make sure she isn’t doubled.

Mirror Stance is here just to make sure she has more attack when fighting in the enemy phase, along with the +4 to resistance, this will make her feel more like a mixed tank.

This is Echnida's best Galeforce build.

Alternatively, she uses a Slaying Hammer+ (Spd) really well too, which improves her matchups against armors, but changes the match-ups a little against other units. She still procs galeforce against armors and tougher opponents though.

Note: If you don't have Flashing 4, alternatively, you can use Atk/Spd Solo 3 or Swift Sparrow 3 in her A-slot and Flashing Blade 3 in the seal slot - it's very similar, but a little less good.

Boon: Def is the best boon for physical tanking, but Res is also acceptable to improve dragon matchups.
Bane: Spd is the safest bane for this build since Quick Riposte guarantees followups already.

Weapon: Rearguard+ (+Def) / Rearguard+ (+Res)
Self explanatory. Plenty of bulk on a 14 Mt weapon? Nothing to sneeze at here.

Assist: Reposition / Flexible
Any assist skill can work here, but I would disrecommend Ardent Sacrifice or Reciprocal Aid since those likely drop her below the HP threshold of QR.

Special: Sol
Sol comes with Echidna and there is no need to replace it. It grants valuable sustain at the end of every combat.

Passive A: Fury 3
Fury chip damage is too little to affect QR, and the spectrum boost it grants is great. Plenty of other A skills will do the job better, but this is a budget build.

Passive B: Quick Riposte 3 / Quick Riposte 2
If you are less than happy to cough up 20,000 Hero Feathers for QR 3, you can stick with 2 and get by just fine. This puts the threshold at about 39 on a 5* Echidna.

Stats shown are at +10 merges.

This build is intended for Aether Raids Offense as the centerpiece of a supertank strategy, but with minor adjustment (swap Special to Aether for scoring, Assist to high-SP, and C to Atk Smoke 3) it is also fantastic for Colliseum modes with Echidna’s great BST.

Weapon - Slaying Axe (+Spd)
-1 cool down count allows you to fire off Noontime on every counterattack, while the speed helps Close Call and doubles, and the HP increases overall bulk. It also makes Aether more manageable when using that for scoring.

Assist - Reposition / High SP skills
Use a high SP skill for Colliseum use like a dual rally or Harsh Command+, or whatever you like outside of that.

A slot - Distant Counter
The quintessential super tank skill allows you to retaliate against all foes.

B slot - Close Call 3 / Repel 3
Either skill will work, the movement is not the main attraction and is up to player preference and availability. The goal is to maximize damage reduction through team support to make Echidna into the best AR tank outside of a fully invested B!Ike.

C slot - Pulse Smoke / Atk Smoke
Pulse Smoke is to shut down Infantry Pulse AR-D teams. If unavailable, Atk Smoke is great on a budget and generally the more useful choice outside of AR.

Seal - Phantom Spd 3
This seal makes Close Call and Repel perform as if Echidna’s speed were 10 higher, putting her effective Spd for that purpose at 56 before any team buffs are taken into account.

Teammates - She can use all the stats she can get, so spectrum buffs are fantastic. Visible Speed in particular is useful to support her because it helps her on both phases to double and reduce incoming damage both by denying doubles and through damage reduction in Close Call or Repel.