Community Posts with Keyword Eirika All 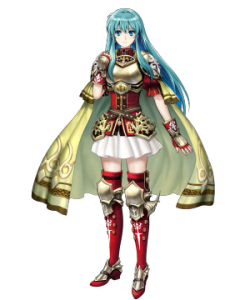 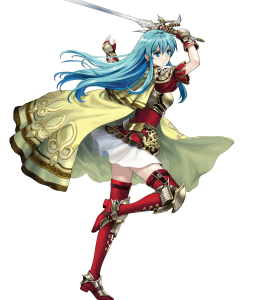 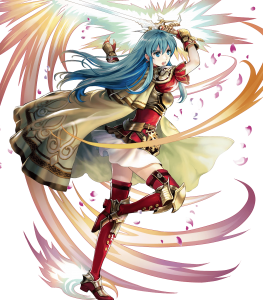 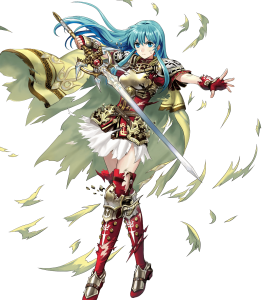 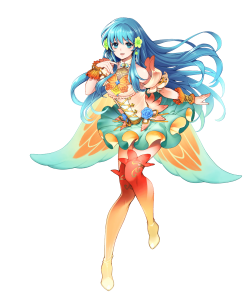 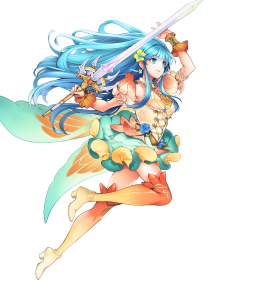 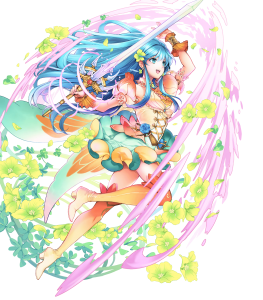 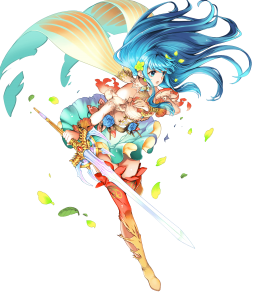 To Protect Her Kingdom (Arena)

The refined Sieglinde allows Eirika to buff her own allies while also buffing her own stats equivalents to the highest boost on any ally within two spaces. While its usability in Aether Raids can be somewhat awkward due to the prevalence of Panic, it can still provide Eirika with huge stat bonuses during combat when unhindered.

With the exception of Attack, Eirika comes with an overall well rounded set of stats. Of particular note is her Resistance stat which helps her to resist magical foes more easily in Aether Raids. In addition to this, if you have her Resplendent form, the +2 boost in all stats is highly beneficial for her viability.

Even with her Resplendent form, Eirika’s Attack stat still remains one of the lowest in the game. This issue can be circumnavigated through Sieglinde and support thankfully, but Eirika can nevertheless struggle with dealing enough damage to opponents quickly. This can prove to be more notable in Aether Raids where time is of the essense.

This build takes advantage of Eirika's ability to easily get up to +18 in every stat. Best run with a support Brave Lucina with her Eff Geirskogul and two non-infantry units with Dual Tactics on each C and S slot. These will not only ensure +18 but likely surpass it.

Eirika's C slot is very fluid and can be used for support if she isn't going to be the main focus of the team. The S slot I use is Sorcery Blade, but I couldn't find it in the list, this allows Eirika to always do as much damage as possible and heal as much with noontime pretty much every encounter. S seal could also be Flashing Blade as not too many characters will be able to contest her speed this allows for Sol and Aether to be rather viable if not overkill. Speaking of overkill S slot close/distant def will likely make Eirika see 0's in many situations.

Instead of Chill Atk/Spd 2, you want Atk/Spd Ruse 3 (website doesn't have it as an option in the build maker)

With that out of the way. Man this build is op.
This build looks to maximize the potential of her refined weapon Sieglinde. Which allows her to copy the stat buffs of an ally within 2 spaces of her.

Hone Atk 3 built into her weapon plus Hone spd 4 in the C slot gives her and the allies adjacent to her +4 and +7 to each stat respectively at the start of your turn.

Rally def/res+ gives her and the target ally +6 to both defense and resistance upon use.

The combination of Atk/spd ruse 3 in the B slot and Def feint 3 in the sacred seal slot debuff any enemy in a cardinal direction of her and/or the target ally -5 to attack and spd, -7 to their defense, and gives them the guard effect.

The special is completely up to you and what you have. She has a high hp pool and does enough damage to make good use of Aether, despite the high cooldown. If Aether isn’t available, Sol, Noontime, Glimmer, and Luna also make for fine alternatives. I wouldn’t use moonbow because Luna is much more consistent given her somewhat low atk, making the extra turn of cooldown very worth in the long run.

All in all, she essentially gets stat buff totals of +11 Atk, +12 Spd, +11 Def, and +11 Res while giving the opponent the guard effect. With all these buffs on her and debuffs on the opponent, she makes for a excellent tank and support capable of setting up herself and her team for success in any game mode.

High-investment Sieglinde support tank. These stats are for a +8 merge with +9 Dragonflowers.
Eirika's defenses are very solid, which enable a DC set. She's also fast enough to make good use of Repel, as well as Flashing Blade+Aether, giving her massive sustain potential. You can opt for +spd with this build as well, to make FB and Repel less reliant on Sieglinde buffs.

Eirika's Sieglind Refine provides a powerful tool when it is paired with the Link Skills allowing her to easily gain a +12 to the stats of the link skill you use. Any Link Skill will be effective for use on this build depending on the type of role you want Eirika to provide on your team enabling her to play both defensively and offensively.

As her Support Skill Reposition is the best choice as it's versatility will provide you with both the ability for monevering Eirika's allys into defensive or offensive positions while also providing the benefits from her link skill.

For Eirika's Special I would recommend running Luna/Moonbow if you are wanting to run an offensive variant of this build so that you can easily deal with high defense units or Sol/Nootime to provide extra survivability. You could also run Aether on this build but it is recommended that you also run skills to increase her special cooldown charge so that she can get more use out of it.

For her A Skill Distant Counter is recommened as it will help boost her utility in the enemy phase by allowing her to counter attack against any ranged enemies that don't have skills to prevent this making her even more effective at baiting, however you could also run Bonus Doubler to further provide a further +6 to the stats she gains further boosting her offense/defense. If you are in need of cheaper options when attempting to make this build I would suggest running bond skills as it will synergise well with Eirika's goal of staying close to her allys to benefit from their bonuses.

As her B Skill any link skill will be effective based on what role you want Eirika to be running on your team. Working with her weapon refine, through a link skill Eirika will be able to gain a +6 to her stats with an additional +6 during combat based on what Links you opt for.

For Eirika's C Skill I would recommend running a Smoke Skill as it will enable her to debuff the oposition with Panic Smoke being the best choice due to it's ability to effect both the unit Eirika fought against but also foes in two spaces helping deal with teams that rely too heavily on buffs. You are also able to instead substitute and Buffs Skills such as Tactic Skills to allow Eirika to provide even more stat boosts to her team.

In this build Eirika's Seal will be highly versatile allowing you to choose whatever seal you want to have on her dependent on the role you want Eirika to play on your team. If you want Eirika to be able to provide a full set of buffs then it would be best to set her Seal to one that will help provide this final buff or if you want Eirika to be able to do more damage then Death Blow or Fierce Stance could be useful. Personally I go opt to use Heavy Blade/Flashing Blade as the massive stat bonuses Eirika gains from this will enable her to easily fall within these skills range of activation allowing her to earn her specials faster.

Finish with her Boons, you can potentially opt for anything based on what kind of role you want Eirika to have. On the majority of builds I would recommend running Attack Boon to help her more easily deal more damage to foes during combat. Additionally, in the event that you are unable to merge Eirika it would be best to make sure that her Bane is in a stat that will not hinder the role you want her to play on your team.

For allies you can run with Eirika I would recommend running a Legendary Lucina or Legendary Chrom with a Link Skill that provides the other two bonuses that Eirika's Link Skill dosen't provide as in unison with their unique support skills they will allow Eirika to gain +12 to all of her stats while also having L!Lucina/L!Chrom keeping their turn of action with them having an additonal +6 to their own stats. Additionally Kaden is also is also a good choice for any ally as his Kitsune Fang will provide Eirika with an extra +6 to her stats when her Link Skills are active, provided that Eirika is within two spaces from Kaden.

The advantages of this build is its high versatility and customizability allowing you to easily swap around skills to allow her to fit into multiple roles in a team with her Weapon Refine allowing her to gain large benefits from buffing her allies. Furthermore, Eirika is able to gain large amounts of bonuses through the use of Assist Skills making her a good character for use in manuvering your units around the battlefield with Assist Skills.

However this build also has it's flaws. Due to a high reliance on providing buffs and panic skills will be massively detrimental to Eirika stopping her from being able to accomplish what her kit accomplishes to do. Additonally her average stat spread stops Eirika from being able to excell in a single area making her easily outclassed by other units if your team composition isn't designed around taking full advantage of Eirika's skill set.

Overall, I wouldn't recommend this build to players who are trying to aim for high levels of play such as Tier 21 as it is easily Eirika is easily overshadowed by alot of the newer units and Lull Skills acting as a massive detriment to her gameplan. However if you really like Eirika or just want to have a more technical unit then I would recommend a Link Eirika to add to your army.

This build uses the refined Sieglinde's effect to be a self-sufficient tank that kills everything that initiates on her. With just one assist move, which can be her own or from other ally she gets +6 to spd, def and res, which doubles if she stays in the range of that ally. You can get more attack from the "hone attack" effect from sieglinde or from an atk tactic or similar buff. In combat she will reach 64/53/44/46 just with the usual +6 buffs and in range from her ally, and then you can begin to add more drives and spurs. That's all, not much mistery there. If you pair her with brave Lucina she is a nightmare. 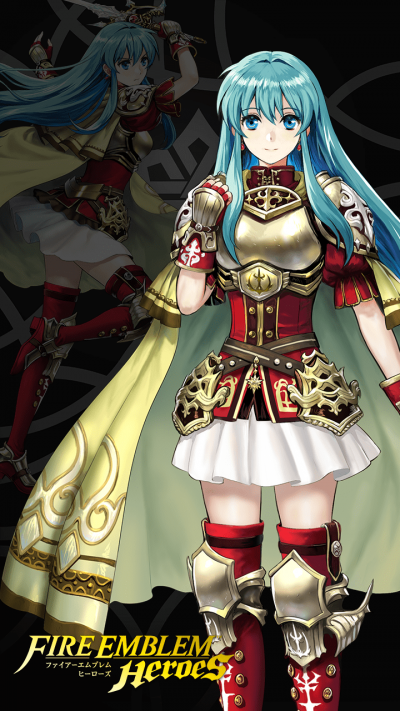