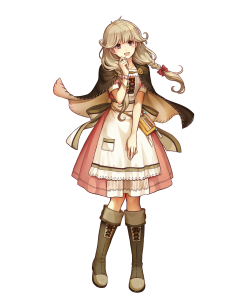 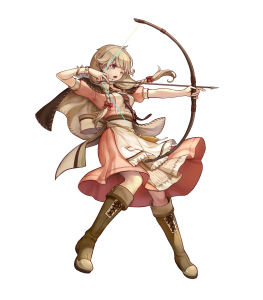 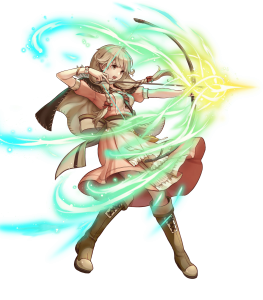 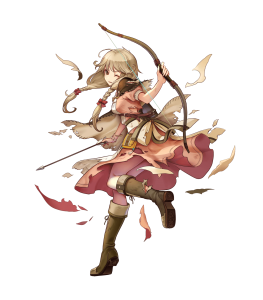 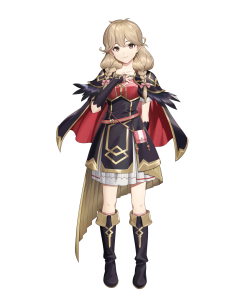 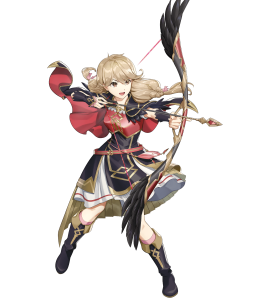 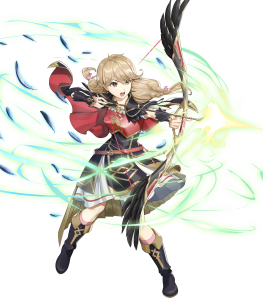 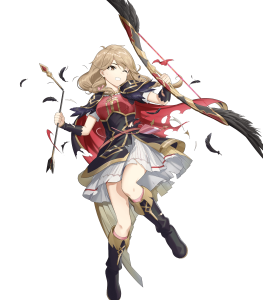 This build is a discount Ines set. The main objective of this build is to be an enemy phase range killer.
Faye comes with a decent defensive spread with 26 Def and 31 Res and a respectable Hp of 42 neutral. Though her offensive lacks in comparison, with her Atk at 30 and Spd at 25.
So for her Ivs, consider it for an enemy phase unit. The best boon is atk so she has more killing power or res to take magic hits better. Def is ok when dealing with bows and daggers. For banes, Spd is the best since her speed is so low it won't make a difference while Hp is fine since she has a good hp pool.
For her weapon, you want to retaliate on the enemy phase, so her natural Firesweep Bow+ won't help her achieve that. Her best option is Slaying Bow+ because triggering her special gets some of the kills she needs, for example killing Bride Coredllia. Killer Bow+ is a side option if you don't have a Leon with you.
Fury 3 is her best slot A since it increases her defensive bulk and survive more rounds.
QR 2 is the bread and butter of this set. Since her speed is low, she won't kill much in one round. This allows her to get the kills she needs against range so her teammates can clean up the rest of the enemy team.
Slot C's are normally flexible, but Faye's high Res stat, she's a good candidate for Def Ploy 3. This will increase her damage output.
Glacies is the best special for her in combination with Slaying/Killer Bow. With how the round goes, by the time she does her last Atk, she can trigger it and deal heavy damage. Though the only counter to this is Brave style weapons. If you're having more trouble with Rhienhardts and Brave Lyns, then Iceberg is better due to the low charge. With this, by the time Faye atks, she's able to trigger it and kill them. It depends on what you want to defeat more.
Draw back is a good support for range units, but Reposition can be better in more situations.
Distant Def is her best seal, since she's a range bait. Getting that extra Def/Res during combat increases her bulk and longevity. If you don't have that max out, then Resistance +3, Quicken Pulse, or Atk Smoke work well.
For Allys, have at least one spur buffer with her. A!Tiki is the best for it because she natural comes with Spur Res 3, further increasing Faye's magic bulk. Pair that with a Spur Def 3 seal and she can be a bait monster. Also A!Tiki comes with Lightning Breath, so she can deal with Melee and Range attacks. The rest is flexible though good options are: strong melee units like Ryoma, Black Knight, Ephraim, Hector, Brave Ike, etc. Buffers like Brave Lucina, Erika. Strong mages like Nino, Tharja, Delthea, etc. It's up to you how to fill the rest of the team.
And that's my version of Faye. At first she wasn't going to be a high tier unit, but using her natural stats and a bit of skill inheritance, she can be a great range bait that Arena has an abundance of. I hope this build helps and good luck.

Atk +3 and FireSweep Bow+ Helps Faye to boost her atk and safely chip the enemy of their health or Finish a low health vantage user.

Death blow is a better option compaired to Atk+3 as Faye will only be able to attack if she initiates combat herself because of her FireSweep bow+ and greatly enjoys the extra +6 damage she gets from Death Blow 3.
But getting a unit with Deathblow for Inheritance isn,t easy to get while Atk+3 is rather common but if you happen to have a spare Klein it might be an option worth considering.

Wings of Mercy allows Faye to reach injured Allies and support them with Spur Atk and Rally speed or chip/finish the enemy who is in range.

Spur Atk can be changed to what other Spur your team prefers.

Rally Speed may be replaced with another Rally or Reciprocal Aid/Ardent Sacrifice to restore the Hp of your allies in need.
It is what you prefer.

Using her base stats optimally, her solid 42 HP, and 26/31 defenses are decent enough to bait pretty much every arena ranged unit and kill them on the return thanks to QP. The QP covers her terrible speed and the Slaying Bow+ charges a fat glacies on the return. Fury 3 patches her middling Atk and boosts her defenses to survive a few more battles. Atk Ploy also helps her survive, using her strong 34 Res when she has Fury to debuff Atk in cardinal directions. She covers common units like Julia, Linde, Reinhardt, and more. Though this build is extremely expensive, it's for lovers of Faye to find any usefulness in her. A plus actually is that she has the highest BST of any ranged unit, allowing her to score a few more points in arena as well.

All in All, though not the most coveted bait unit in the world, this is niche build that works well in the current meta arena and helps those seeking to have higher arena BST totals.

With this build Faye can be used as the an emergency healer, since she has wings of mercy by default and no unity counters attack her, she can teleport near a unity attack and heal near by unities with breath of life.
That is a god build if you do not wish to have a healer on your team, but would like to have a way to heal any unities that would be in serious trouble. Also works well in tempest trails.
If you don't want to spend a lot on this unity you use the death blow 2, and the unity would still be very useful.
Reposition is a god support skill since can be used to move away an unity that might be in risk, drawback would be god as well for the same reason.