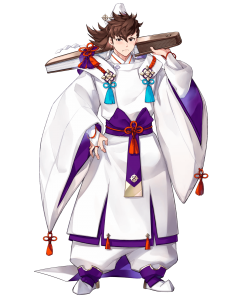 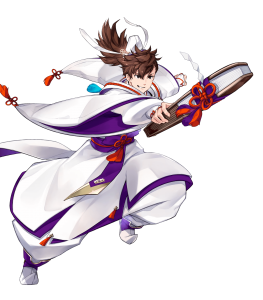 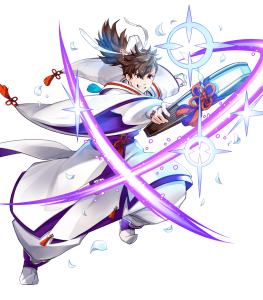 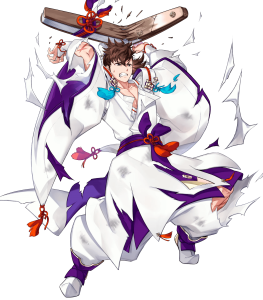 In his groomy glory, Hinata traditionalizes both his culture and the usual axe infantry fare, coming in with great neutral base 47 HP, 37 Atk, and 40 Def. Thus, he can confidently duke it out with tough physical enemies for long periods of time, especially considering other forms of investment such as merges and his great default weapon, Huge Fan.

As a fourth-generation infantry unit, Hinata not only shines with a high base stat total, but also benefits from great Coliseum scoring potential and decent stat allocation as a result.

Being an infantry unit, Hinata gains access to quite a library of tools to use. With the help of skills such as Lulls, Special Spiral, Wrath, Time's Pulse, and Breaths, Hinata can definitely put in a large share of work while rarely having to worry about infantry weaknesses.

Also true of his original self, Hinata's emphasis on his physical assets doesn't leave much else left for his Speed and Resistance. While his pretty average but improvable Speed can be worked around by using Quick Riposte or utilizing certain forms of investment, his low Resistance constantly keeps him from cleanly matching up with mages and dragons.

Those already familiar with using Ross, Echidna, and many other axe infantry units as competitive choices might have investment and deployment issues with Hinata (granted, you don't have to spend feathers to 5* him as a Tempest Trials reward). Ross, Hinata's most comparable competition in the low-rarity summoning pool, achieves an arguably more ideal stat allocation, especially in Speed and Resistance.

Heroic Grails is not a resource most players can simply throw around for the next new shiny toy, so Hinata suffers a bit from summoning constraints, especially considering more easily mergeable competition.

This build is meant to tank on defence

distant foil is used over distant counter to further increase atk and def as well as focus on physical enemies since most magic enemies can one shot hinata and those that can;t can usually be taken care of on player phase although distant counter should work well enough

lull atk/def is used because it removes buff&#039;s to your opponents atk and def allowing you to take a lot of hit you otherwise wouldn&#039;t be able to (build shows Lull Atk/Def 3 because it didn&#039;t have Lull Atk/Def 3 in the skill list for some reason)

Threat. Atk/Def 3 is used because it allows hinata to buff himself and activate hugh fan&#039;s effect even if he is out of range of a teammate that can buff him allowing for more flexibility in how you move him altough this can be replaced by any other skill you see fit for the team you have him on

Groom Hinata is introduced as a green axe infantry unit, boasting a highly min-maxed stat spread along with an amazing tool of the trade: the Huge Fan+ ! Now it’s insane to think that this weapon comes to us as an inheritable skill due to the fact of it being not just amazing, but also due to it outclassing many weapons that exist within the game today. In itself it seems like it should’ve released as a prf weapon, and in all honesty I would have preferred this to add value and uniqueness to Hinata, rather than making him top tier fodder. But even if this is the case, Hinata can be made into a monster of a tank with some very insane surprises moving along the way. So I present you my Hinata build, but through in evolutionary phase, incase those that don’t have the fodder needed can start small for a really clean tanking machine, and move up over time.

Let’s start with the pre-evolutionary build, showcasing his sheer tanking potential at base level and unmerged, all the way to post, where he is fully merged and a full fledged foundation to your ramparts! With this starting build, you want:

-Weapon: Huge Fan + (Res or Def refine)
-Assist: Reposition (Swap also works)
-Special: Aether (Ignis can be used but a healer/Eir/Herons might help as teammates)
-A slot: Steady Stance 3/ Sturdy Stance 2 (If you have the fodder for it, Steady stance 4 is a great investment)
-B slot: Def\Res Link 3
-C slot: Atk Smoke 3
-Sacred Seal: Quick Riposte 3

With this build, Hinata can sustain his weapons bonus requirement with Def\Res Link, allowing for you to have some control over its uptime (although you want to make sure at least 1 ally is alive and well). Using this set (With steady stance 3 and Def refine being our controls), Hinata can reach 50 HP, 55 Atk, 27 Spd, 56 Def, and 27 Res! The Tanking potential on Hinata is no joke, and with this stats he can compete against many melee ranged units no matter the color, as well as Many slow nuking magical units as long as he doesn’t have the color disadvantage! No as a middle ground skill, if you ever stumble upon steady stance 4, things can only go up for you, as now you knock your foes special off the table!

Speaking of going up, let’s take a look at the Post merge set, as his ability to decimate in the enemy phase soars through the rough! In this set, we use:

Now, things are very spicy here! But they also seem... strange? There are some many skills allocating to stats that seem dead, but boy oh boy are we mistaken. Hinata is meant to be a super tank... even against those that should triumph if invested into properly. And this build shows that, hehe. Using bracing stance 3 sacred seal as our control (assuming that it is released into the game), Hinata, with this set AND at +10 merge, can reach (merge math may be alittle off, but not at all terrible) 55 HP, 62 Atk, 46 Spd, 59 Def, and 35 Res! Isn’t that insane! Not only that, but he can also run either Lull Spd\Def or Repel, allowing him to either increase his damage output while negating the follow ups of speedy foes, or just take reduced damage from slow yet hard hitting units such as mages! His Physical bulk reaches a whopping 114, whilst his magical bulk can still hit 90. Not only do these things occur, but Hinata also gets guard as well as an almost guaranteed follow up in enemy phase against many average-to-mediocre speed units, removing the fear of specials as well as the feeling of needing quick Riposte in your set! And since this is ALL happening in the enemy phase, Hinata gets a fully charged Aether to use right back at his foes with a mighty swing whilst also providing heals, maintaining his uptime! And this is achieved all thanks to well placed stats and a simple yet amazing weapon. Don’t sleep on Hinata, as he packs a hell of a punch with little to no budge!