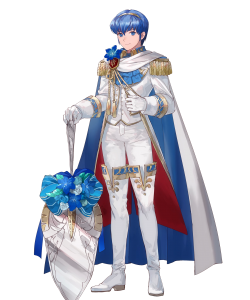 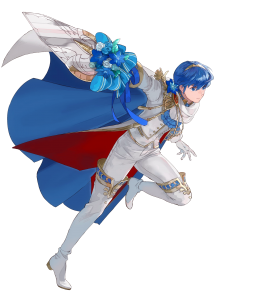 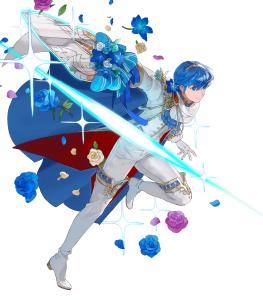 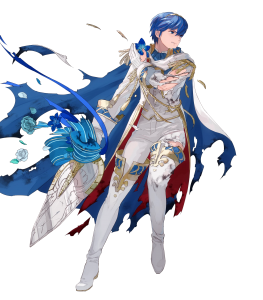 Dashing Duelist (Jack of all Trades)

Boasting an impressive mix of speed and defense for a Cavalry Axe hero, this set aims to take advantage of his serviceable attack and speed while maintaining his physical bulk. Slaying Axe is the weapon of choice, allowing Marth to land powerful specials consecutively. Bonfire allows Marth to fire off a guaranteed 15 damage at the opponent, which may be further amplified by defensive buffs such Fortify Cavalry and Fury. Luna meanwhile allows him to deal more damage against physically bulky foes, such as Hardin and Lukas. Moonbow meanwhile provides Marth with a special to proc against enemies that are unable to retaliate such as mages and Firesweep users.

Swift Sparrow is the A skill of choice, providing Marth with a strong offensive boost upon initiation with no drawbacks. Life and Death on the other hand grants stronger offenses on both Player and Enemy Phase while lowering his defenses. While Fury gives a weaker offense than both skills, the defensive boosts coupled with its chip damage assists Marth in getting into Desperation range easily.

Desperation synergies well with Marth’s excellent speed, allowing him to avoid retaliation against foes once his health reaches the activation threshold. Guard on the other hand allows him to safely engage foes capable of unleashing powerful specials easily such as Hardin and Hector.

Marth’s C skill slot is extremely flexible depending on your team composition. His native Drive Attack allows him to buff any ally in the vicinity with a boost in power. A Cavalry buff may be chosen if utilizing him in a Cavalry centric team, Tactics skill are also something to consider if running a mixed composition, especially alongside teammates such as Camilla.

For Sacred Seals, Marth can opt for a Drive or Tactics skill to improve his support potential or a combat boost like Attack + 3 to deal more damage on the battlefield.

After You (Supportive Groom)

Ardent Service serves as an excellent tool in providing buffs to both allies and the wielder. This allows Marth to serve as a dedicated support unit while maintaining his offensive capabilities. While Ardent Service may seem redundant in Cavalry teams, it allows more flexibility in Cavalry buffs in your composition, such as Goad and Ward Cavalry. Fury is the A skill of choice for this set for its reliable defensive boosts in exchange for after-combat damage. Sturdy Stance and Close Defense may be taken as alternatives should chip damage be a deterrent.

Chill skills complement Marth’s supportive capabilities by inflicting debuffs on the opponent, allowing for easier engagements for both Marth and his allies. Wings of Mercy, on the other hand, allow Marth to easily position himself to injured allies, either repositioning them out of danger or assist in dispatching their foes.

Marth’s C skills and Sacred Seal focus on assisting his allies for this set. Drive skills are recommended due to their ease of use while still providing a substantial stat boost. Cavalry Buffs may be chosen in the C slot if utilizing him in a Cavalry team. Tactics skills, on the other hand, can once again be considered if a mixed composition is considered in Marth’s team.

While not particularly outstanding amongst other units, Marth’s 36 speed makes him the fastest Cavalry unit to date. This allows him to double the majority of units in the game after a Hone Cavalry.

Though Marth’s attack and defense may seem unassuming on their own, the combination of his speed and Cavalry status enables him to be an excellent duelist under Cavalry boosts.

Armored Blow 3-Boosts Marth's defense up to 40 when he attacks,which lets him tank a little bit more.

Desperation 3-If he's in a bad spot it allows him to deal with enemies quickly.If he doesn't kill,then Armored Blow 3 may help him survive here.

Capable of being able to duel, Groom Marth is a good addition to cavalry emblem as a buffer. As he generally wants to bye adjacent to an ally at all times, he will benefit from the +4 buff to attack from Ardent Service. His high speed and decent defense are a good combination to allow for him to at least survive combat with many units, save units with exceedingly high speed or bold fighter armors, and the fringe cases of brash assault users. Simply, characters that get guaranteed doubles.

One can run a +Def Ardent Service to put his defense to 38, a more respectable level than 34, though this build is for an offensive support. Doing so would require a skillset revamp for a more defensive build. Say, +Def Ardent Service, Def/Spd Bond, Guard, Hone Cavalry, and Close Defense for the seal.

I decided to go full on offensive mode on this boi

Marth's bases are pretty good, plus I like him doubling almost everything in his path so

I could have gone to use Wo Gún+ for him bc of his speed; but I don't have a Libra yet ;-;

This build works with Groom Marth’s default weapon to create an offensive and supportive unit. Like regular Marth, this Marth can play a big support role towards his teammates when he’s right next to them to give them hone boosts

Ardent Service+ works well with skills that place Marth next to an ally to boost their stats.
The refine choice is flexible as to consider different applications of Groom Marth’s offensive prowess.

The assist skill slot is flexible and depends on the player’s preferences.

Luna is used as a special to improve on his attack. Moonbow could also be used if one prefers more activation over more of an effect. Aether could also be utilized should one prefer a healing effect upon impact. Bonfire / Ignis are also worth mentioning due to his natural 30 defense stat.

Brazen Atk/Def 3 or Brazen Atk/Spd 3 are reommended as they boost his more admirable stats by 7 when he has less then 80% of his HP. Brazen skills also pair well with Desperation 3 with its 75% or less requirement. Fury 3 is also a nice option for stat boosts with the chip damage to put Marth into the Desperation 3 zone.

The C slot and Sacred Seal slots are mostly flexible, but this build recommends the Hone and Fortify skills that suit your teammates needs. The same applies to those who would like use him on a Calvary team.

Seal: Hone Spd
Merge: +1
--
Horse team's one-stop-shop for buffs. Atk and Spd might be less than the hone horses but it's a fair price to consider that he can help free up some other horse allies' C skills.
His B skill is still a little iffy but a link skill has been tempting but I have been unable to pull one.