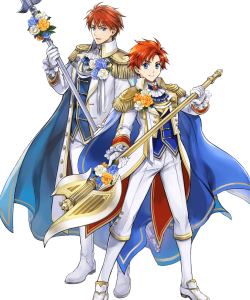 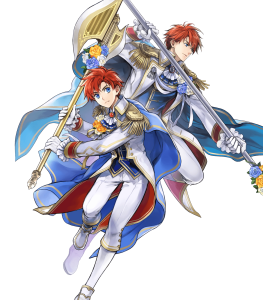 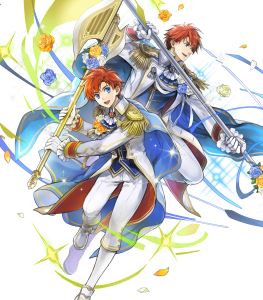 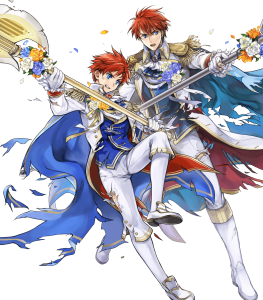 Roy and Eliwood team up to make the Blazing Polearms, a powerful personal weapon that:

In addition to Blazing Polearms, Roy also has Faith in Humanity, a powercre- uh, I mean, upgraded version of his Legendary alt’s Human Virtue.

With the power of family bonds and showstopping suits, Roy not only enables higher scoring in Resonant Battles and the Duo’s Hindrance structure in Aether Raids but also has a Harmonized Skill that grants Def/Res +6,【Resonance: Shields】, and【Treachery】to himself and allies from The Binding Blade or The Blazing Blade.

Also, don’t they look so dapper together?

Superior movement and access to skills such as Flow Force and Atk/Spd Catch make Roy a premier offensive choice for many teams.

39 HP and 30 Def are average values, while 25 Res is on the lower end. With no access to damage reduction, Roy may be prone to getting OHKO’d, especially against magical enemies. In particular, he may struggle against some of the aforementioned units he’s supposed to be strong against—not because of poor damage output, but because of a potential inability to survive a counterattack.

Susceptible to Buff Neutralization and Reversal

Blazing Polearms and Faith in Humanity make Roy somewhat buff-centric. If Roy is inflicted with【Panic】or his visible buffs are neutralized during combat, he may not be able to inflict in-combat debuffs on the enemy with Blazing Polearms. Additionally, if his allies are inflicted with【Panic】, he may not be able to get the Tempo effect from Faith in Humanity.