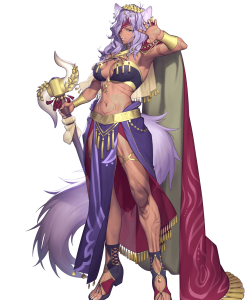 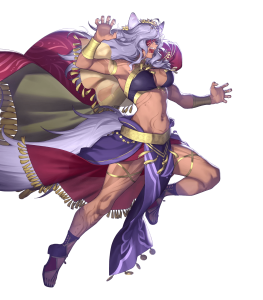 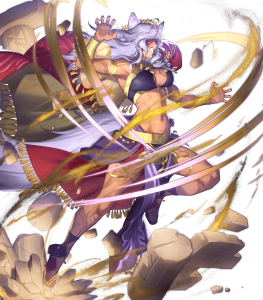 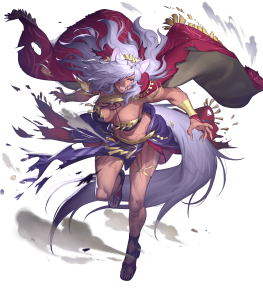 Passive A: Flashing Blade 3 or 4 / flexible

Passive B: Wings of Mercy / flexible

Royal Hatari Fang combines a variety of great effects, including stat boosts and the effects of Null Follow-Up under easy conditions, allowing Nailah to activate Specials more easily, boosting their damage, and allowing her to move after combat with Canto. This can be useful to retreat from enemy range, or box in certain enemies so they cannot attack.

Nailah’s base 39 Atk and 43 Spd are great and allow her to deal good damage while gaining a follow-up attack against most units.

Nailah’s status as an Infantry Beast unit allows her to use some useful skills like Odd Tempest and Time’s Pulse.

Nailah’s character-unique C skill, Glare, allows her to apply the Gravity status to her foe and any foes within 1 space of that foe after combat, restricting their movement to 1 space through their next action. This allows her to more easily attack a unit and then retreat out of their range with Canto.

Nailah’s base 35 Def is high, and her base 40 HP is average, allowing her to take physical hits decently well.

Nailah’s base 25 Res is somewhat low, meaning she takes high damage from magical units such as tomes and dragons, possibly being KO’d in one hit by stronger ones.

As an infantry unit wielding a melee weapon, Nailah can only move 2 spaces while not under the effects of March, and can only attack foes adjacent to her. This means she can have a hard time initiating against enemies with high movement and threat range without some help.

Beast units must transform at the start of their turn to gain the full effects of their weapon, and Nailah is no exception to this. She will only transform into her beast form if she is only adjacent to other beast or dragon units or no units; if she is adjacent to any units wielding another weapon like a Sword or Tome, she will not transform and will revert if she is transformed.