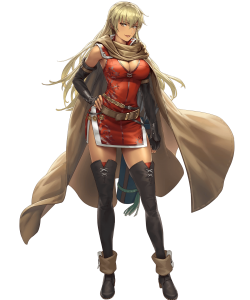 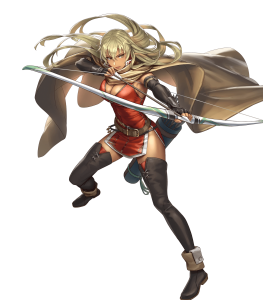 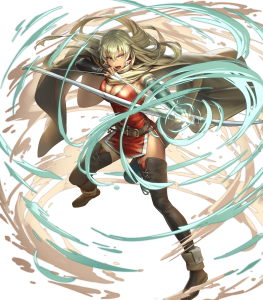 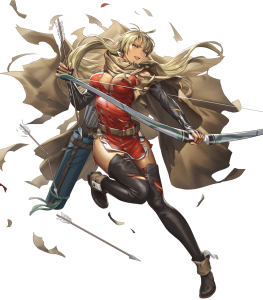 A Hawk For An Eye (AoE Offensive)

This build is designed around maximizing the use of AoE Specials: an easy task given that Igrene already comes with practically everything she needs. An Asset in Attack or Speed will both be beneficial, though Attack is the preferable of the two for raw damage output. Either Defense or Resistance work fine as a Flaw. HP can also be a fine Flaw should Igrene be alongside Infantry Pulse support.

Passive A: Life and Death 4

For general offensive purposes, an Asset in either Attack or Speed will be ideal. Attack will help with raw damage output while Speed will help with securing follow-up attacks and activating Guardian’s Bow. Either Defense or Resistance will be good for Flaw.

The daughter of Hawkeye and the protector of the Nabata Desert, Igrene makes her glistening debut into Fire Emblem Heroes. After almost 18 months since the first colored bow unit, Igrene joins as the first red bow wielder and one that makes a strong first impression.

Igrene has a lot of strengths going for her. She comes with a powerful personal weapon that can debuff her foe, great offensive stats that lets her put this weapon to use, and comes practically built out of the box for an AoE Special offensive build. She definitely has her weaknesses though: Her below average defenses leave her someone vulnerable to enemy attacks while being a colored archer can be more hindrance than help.

Overall, Igrene remains a powerful offensive option. Her combination of a strong personal weapon, fantastic offensive stats, and stellar base kit makes her a very desirable units both for newcomers and veterans alike. If one has been awaiting the release of the red archer, Igrene will not disappoint.

Guardian’s Bow is Igrene’s personal weapon. When Igrene outspeeds her opponent with this weapon equipped, she will debuff the opponent for five Attack, Speed, and Defense, giving her a substantial combat boost. On top of this, Guardian’s Bow is also a Slaying weapon for lower Special cooldown. With her Speed, Igrene faces little trouble activating this weapon.

Igrene comes with 37 Attack and 37 Speed, the same offensive spread found on the infamous Legendary Alm. In fact, Igrene’s spread is arguably superior to Legendary Alm given she has access to an Attack superasset. While she isn’t as oppressive as Legendary Alm since a large chunk of his power comes from his weapon, Igrene’s Attack and Speed still allow her to be an imposing offensive force in battle.

It’s not often that units come with literally everything they need for one of their primary sets, but Igrene does so anyway. With Life and Death 4, Special Spiral, and Pulse Smoke at the cost of zero inheritance, Igrene is stacked for skills right out of the box for offensive roles, most notably in utilizing AoE Specials.

Igrene comes with defensive stats of 42 HP, 26 Defense, and 24 Resistance. While she is not frail by default, what is worth nothing is she will typically be using Life and Death 4 which will lower her defenses even further. One should try to take caution as too much punishment will result in Igrene becoming significantly damaged quickly.

Being a red bow unit can be seen as more of a problem than a bonus. While she will be more effective against green opponents than other archers, she will suffer against blue opponents. Being unaffected by the weapon triangle is one of the typical strengths of an archer, which is something Igrene does not have and in turn can arguably make her easier to counter.