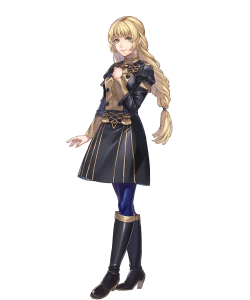 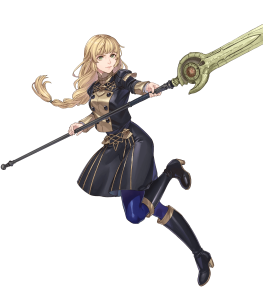 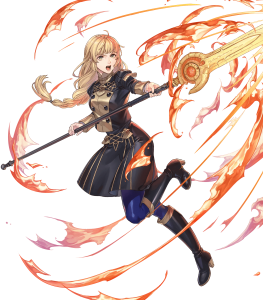 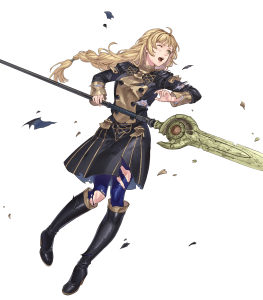 While an Attack Asset is a great choice for any offensive unit, Ingrid much prefers Speed (unless she is using Heavy Blade) due to Lúin’s true damage based on 20% of Ingrid’s Speed and counterattack prevention if Ingrid’s Speed is at least 5 greater than the enemy’s Speed.

I’ll never forget the ease you put me in... (Aether Raids Defense)

Wherever you are now, I’ll carry on. (Galeforce)

Ingrid’s dedication to knighthood has paid off, with 35 Attack and 40 Speed allowing for high damage output and follow-up consistency in combination with her personal weapon.

Ingrid’s Crest weapon comes with a variety of strong effects that make her one of the best initiators in the game.

While her father was never happy with her riding away on her horse, Ingrid always did so anyway, allowing her to utilize skills that increase her consistency, damage output, and/or mobility; such Skills include Flow Refresh, S/D Near Trace, and Lull Spd/Def. In addition, she can take advantage of Cavalry-specific buffs like Goad Cavalry to further boost her offensive capabilities. Cavaliers’ innate 3 movement also allows Ingrid to reach enemies her allies may not be able to reach, which is especially helpful in Aether Raids Defense (particularly with traps that use Rally Assists, refreshes, and skills like Ground Orders to extend threat ranges beyond what they were at the start of the phase).

With the rising prominence of Near Save, counterattack prevention and true damage are more valuable than ever in Aether Raids. In the current meta, Ingrid has a desirable niche as a unit that has good range, Slaying, true damage, and easily achievable counterattack prevention; she can pierce physically defensive enemies through Specials, true damage, and Poison Strike, the latter of which can be used in both Ingrid’s B Slot and Sacred Seal to inflict 20 damage after combat rather than just 10. Thanks to Lúin’s Speed-based counterattack prevention and Near Save units typically having middling to terrible Speed, Ingrid can consistently survive initiations and activate Poison Strike after combat.

Access to Fatal Smoke, Panic Smoke, and Lunge can add to her effectiveness as a strong Aether Raids Defense frontliner. Fatal Smoke prevents the target from healing during combat and inflicts【Deep Wounds】on the target and enemies within 2 spaces, which prevents healing during and after combat; given that many tanks rely on healing via Specials and/or Mystic Boost, this is a valuable effect to have in any Defense Keep. Panic Smoke inflicts【Panic】on the target and enemies within 2 spaces, which converts visible buffs to debuffs; Peony and Plumeria, the Mythic refreshers for Light and Astra respectively, both grant visible buffs to their team, so being able to reverse those buffs can turn the tables. Note, however, that Skills such as Atk/Spd Unity, Chaos Ragnell, and Exalted Falchion (+Eff) can take advantage of panicked buffs by reversing and doubling them during combat. Finally, Lunge can bring enemies closer to Ingrid’s team or away from a defense tile via swapping Ingrid and the target’s positions after combat. Note, however, that Lunge does not work when the【Savior】effect of Near Save is activated.

37 HP, 28 Defense, and 27 Resistance sum to 64 physical bulk and 63 magical bulk. While Ingrid’s worrisome bulk can be circumvented on Player Phase thanks to Lúin’s conditional counterattack prevention, it can pose problems if Ingrid finds herself needing to Enemy Phase.

Being a Cavalier comes with negative consequences as well. Ingrid’s relatively low bulk and being unable to prevent guaranteed enemy follow-up attacks make it difficult for her to become an effective shield of Faerghus. She may also find trouble on Player Phase against enemies that can nullify/avoid her counterattack prevention and have guaranteed follow-up attacks, though these are few and far between. Regardless, however, Ingrid’s issue of sketchy survivability is only exemplified by Cavalry-effective weapons that multiply the user’s effective Attack by 1.5 when calculating damage. The innate 3 movement Cavaliers have can also be mitigated by forests, trenches, and impassable terrain for non-Fliers (such as lava and water tiles), all of which remove Ingrid’s strength of having high range.