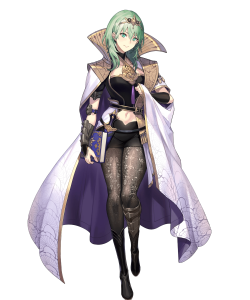 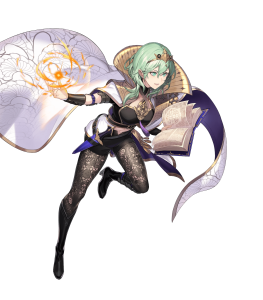 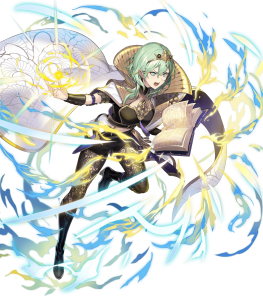 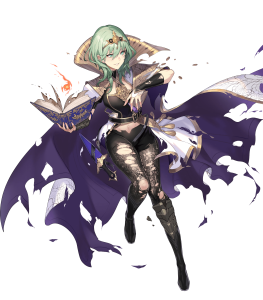 The Power of God and Anime (Player Phase/Arena Scoring)

Professorial Guide is a great weapon that provides the Slaying effect (Special cooldown count -1). In addition, whenever Byleth initiates combat or is within 2 spaces of an ally, it boosts all her stats in-combat by 5, neutralizes the effects of any skills that increase her foe’s Special charge or reduce her own, as well as providing the same Special charge benefits to allies within 2 spaces, sort of a “Drive Null Guard” effect that is largely unique to her. This weapon allows her to function both as a highly effective player phase offense unit, and a somewhat unique support.

Goddess Bearer is a fantastic C skill that provides a buff of 7 to Byleth’s Atk and Spd whenever she starts her turn within 2 spaces of an ally, as well as providing two status effects with that same condition: Null Follow-Up, and the ability to warp adjacent to any ally within 2 spaces, similar to the effect of Ground Orders.

Byleth’s base 39 Atk and 43 Spd are great and allow her to deal high damage while gaining a follow-up attack against most units, outside of the extremely quick.

Byleth’s status as a tome-wielding Infantry allows her to use some good inheritable skills like Atk/Spd Ideal, Windsweep, and Lull Spd/Res.

Byleth is a Wind Legendary Hero with the Pair-Up effect, allowing her to Pair-Up with another ally in a limited selection of modes including story maps and Allegiance Battles, boosting her effective Base Stat Total for scoring up to 185, and boosting the HP of allies blessed with Wind by 3 when Wind is in season.

Byleth’s base 40 HP, 23 Def, and 26 Res are mediocre and render her vulnerable to being KO’d by powerful counterattacks. While she can avoid some counterattacks by using skills like Windsweep or Watersweep, each one of those leaves some units still able to counter based on weapon type.

Byleth’s status as a Wind Legendary Hero means that she cannot be Blessed with another element. This is a limiting factor in some modes, such as Aether Raids; she will not contribute to a team’s Lift gain unless Wind is in season.

While Byleth possesses some unique and powerful effects from Professorial Guide and Goddess Bearer, she competes with many other powerful tome infantry including Legendary Byleth (M) for use on teams in general, and with other amazing Wind Legendaries like Legendary Sigurd for use in Arena in Wind season. She is a great unit, but may not be the best choice for a particular team or role.