Community Posts with Keyword Legion All 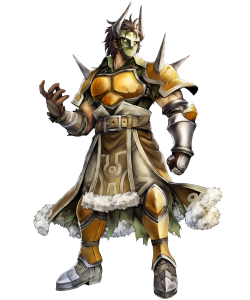 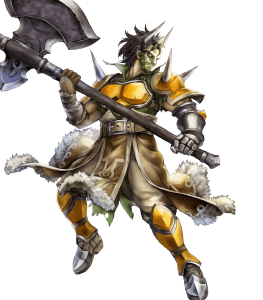 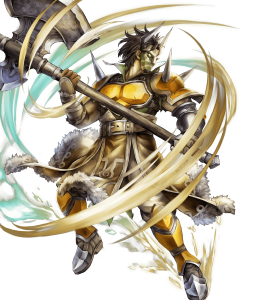 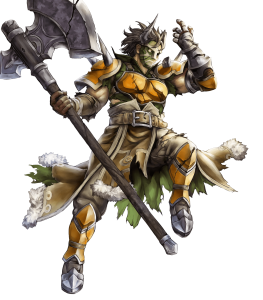 If you had to categorize every weapon by which year they came from, you'd generally be forgiven for thinking Sneering Axe came from a fourth-generation unit.

In short, Sneering Axe's sheer number of great effects pretty much turns Legion from a generic Axe infantry pick to a truly competitive choice. It's very easy to pay loving attention to its base effect; it can potentially turn the foe's bonuses against them by crippling them with double the number of debuffs. It is a frightening thing to face under correct conditions, though make no mistake: it's reliant on the opponent, and it's imperative to also pay much attention the weapon's refined effects which are covered below.

For a free first-generation unit, Legion has aged remarkably decently due to his fantastic offenses. Legion's offensive potential enjoys little shortages as both his 36 Attack and 35 Speed are both reasonably high and malleable enough to create a number of competent offensive builds without being too special-reliant.

Additionally, with the introduction of Sneering Axe, Legion gains +5 Atk/Spd against reasonably healthy enemies (above 75% HP)—which punts his offenses at a more splendid 41 Atk / 40 Spd for basically one of the easiest conditions in the game.

As units like Eliwood have attested before Legion, Special acceleration built into a weapon is no joke. Specifically, one of Sneering Axe's primary effects includes accelerating Legion's Special on his attacks. Legion therefore enjoys frequently activating Specials without needing to sacrifice his A slot or Sacred Seal for Heavy Blade or Flashing Blade. It has a condition, though, which is fighting against enemies with 75% HP or above—which is frankly no condition at all most of the time.

Legion's larger-than-usual base 46 HP (49 if weapon refined) and previously mentioned high Speed gives our masked berserker surprising one round survivability. An unmerged Legion with a refined Sneering Axe will bring about 71/67 total Def/Res bulk, while fair investment in his Speed will make natural follow-up attacks fairly difficult against him in practice. Additionally, Legion can utilize his Axe effects—specifically the opponent-based bonus doubler and guaranteed Panic Smoke—and damage reduction skills like Spurn to further practicalize his ability to tank hits.

As an infantry unit, Legion faces little shortage in passive skills and ally support options. Time's Pulse, Infantry Pulse, Null Follow-Up, and Geirskögul are a few of many others Legion can utilize to improve his performance and versatility.

Compared to direct competitors such as Hilda and Edelgard (5 star exclusive) and Linus (no existing rotation at this time of writing), Legion and all the great perks that come with using him are pretty much freely—and possibly eternally—available for players at any time due to being part of the Daily GHB Revival Rotation for the foreseen future. Additionally, since Legion reran many times in the past, the cost of fully merging him is relatively cheaper than your average Heroic Grail unit.

Despite being padded by Legion's massive HP, his base Defense and Resistance values of 22 and 18 basically limit him to only a reasonable amount of punishment. Relatively strong attacks make Legion fold pretty fast if he is left open and weakened. Though the issue can be padded by utilizing damage reduction skills, this can only carry him so far as Legion's natural defenses are lacking compared to other units utilizing similar builds/techniques such as Echidna.

There is a counterargument to be made against Legion's great availability with respect to his great competitive performance: if you do summon the likes of Echidna, Edelgard, and others, you may find that these units tend to have very competitive perks in their unique weapons and similar—sometimes slightly superior—stats and prebuilt movesets. Those who tend to spend or summon a lot may also run into copies of these units quicker than a player can gather grails for the rest of Legion's merges.

When it comes to old GHB units, Legion is the perfect definition of "Ol' Reliable" thanks to his ridiculously good weapon and solid offensive stats. This build assumes he is +2 merged thanks to the free copies from the GHB rotation.

The Sneering Axe combined with Atk Smoke is brutal. With the combined effects of Panic Smoke and Atk Smoke, even frail attackers will be able to survive combat consistently. Coupled with the refined effect to ensure Legion can actually fare well himself, and you have one strong unit on your hands.

We're not done yet though. Close Call takes advantage of Legion's great speed to truly make use of his massive HP. The 40% damage reduction will generally be active at full force, and allows Legion to safely activate his smoke effects and take out dangerous threats quite easily. It is not always necessary for a Legion build, but it is very helpful in keeping him alive.

Noontime is the perfect special for this Legion build, allowing him to stay alive through many battles. One can opt for Sol for an enemy-phase focus. The A-Skill slot is entirely down to personal preference, but you can't go wrong with a simple Fury 3. Distant Counter would also work well, but you miss out on the extra stats, which Legion benefits quite a bit from.

Sacred seal slot is flexible. Atk/Spd solo is simply there to augment his offensive stats further.

With this set legion has over thirty in both defences, and a high enough speed to not get doubled by most enemies, then spreading panic smoke and pulse smoke using his weapon.
His hp is insanely high, so he can survive one hit from almost anything.

Mixed Phase Special Spam Build. Can duel most red units on Enemy Phase with his excellent Spd and Atk. Panic Ploy for increased utility to tank and potentially reduce the risk of an enemy unit outspeeding or potentially match the speed of Legion.

Return of the Masked Maniac

While there are some much stronger green units out there like Hector and M!Grima, Legion is one unit that shouldn't be overlooked. Boasting some pretty high HP, Attack, and Speed befitting a Berserker, Legion is an axe user you should look into if you don't have any of the high-ranking greens on hand.

Legion's Assist skill options are Reciprocal Aid and Reposition; RA is used for a one-time heal for someone with high HP like Arden while setting him up for Desperation, while Reposition can be used to get mages out of the way of physical units that he can take hits from.

His special boils down to Luna and Moonbow, both allowing Legion to hit through even the defenses of Armor units. Luna is used if more power is desired, whereas Moonbow is easier to charge and use at the cost of Luna's extra defensive bypass.

His main weapon is Slaying Axe+ with Speed refine, which grants him even more of a speed boost to prevent even doubles from units that aren't running Brave weapons or the Axe-Breaker skill. This also speeds up the charge time of his specials which can help Legion pull a come from behind win against even some red units. An alternative budget weapon is his default weapon with Speed refine as well, especially since the refine allows Legion to spread Panic status to all units that are close to the target he hit which can be ideal for shutting down Blade Tome units like the ever present Nino.

A-skill is Life and Death 3, bringing his Attack and Speed up to some pretty high levels at the cost of his already low physical and magical defenses. Legion's default Fury 3 is a good budget option since his high speed can at least prevent a double from a red mage(with Fury 3 he survived both a red mage hit with enough HP to survive an attack from Valter during his Lunatic GHB). An expensive option, which has long past, is Brazen Atk/Spd 2; with Legion's high HP, he can survive a hit to activate this skill and even kill with it if he has...

Desperation 3 is the B-skill of choice given the Masked Maniac's monstrous speed, which can stack up very nicely with any of the A-skills listed. Axe and Lance Breaker are his other options, giving him some doubling power against units of that type at the cost of them possibly being able to kill him if they get lucky.

Legion's C-skill is flexible depending on your team and skills; Spur Atk/Spd 2 from Sothe allow long range units to get hits and possibly doubles if there is a unit within striking distance, Threaten Def 3 makes Legion's attacks hit with more force and can help possibly kill his opponent, Threaten Spd 3 is used to help Legion double units if there is a speed tie between himself and his target. Another option is Panic Ploy due to Legion's great HP stat, though you have to make sure whoever he's targeting is within his line of sight.

Legion's seals boil down to Spd+3and Heavy Blade 3; Spd+3 is used to give him as much speed as possible for getting/avoiding doubles, while Heavy Blade can get his specials to charge faster because of his great Attack stat.

In terms of teammates Delthea is a pretty solid choice; Dark Aura's Hone Atk boost plus her natural Drive Atk 2 gives Legion the extra firepower needed to kill anything, while also keeping reds and some blues away from Legion. In return Legion can deal with strong blues and even other greens, plus if he's running Spur Atk/Spd 2 with Delthea right beside him she can even handle low Resistance greens and can pull her back if he has Reposition for his assist skill.

Legion has good speed, but 35 isn't enough to do more than match the top tier speed units. Combined with his axe, which causes a panic effect, he makes phenomenal use of Windsweep. With fury he gets buffed to 53 and 38, which are great offensive stat lines, and 25 defence means he should survive one round of combat. With Windsweep and the Phantom Speed seal, he gets a free attack on anyone with 42 or less speed, and with them wounded and given the panic status, when they attack him they will most likely be killed in the counter attack. With Savage Blow he deals 7 extra damage to enemies, but he could also run and Smoak skill, or Threaten. Panic Ploy also helps with his high HP stats. 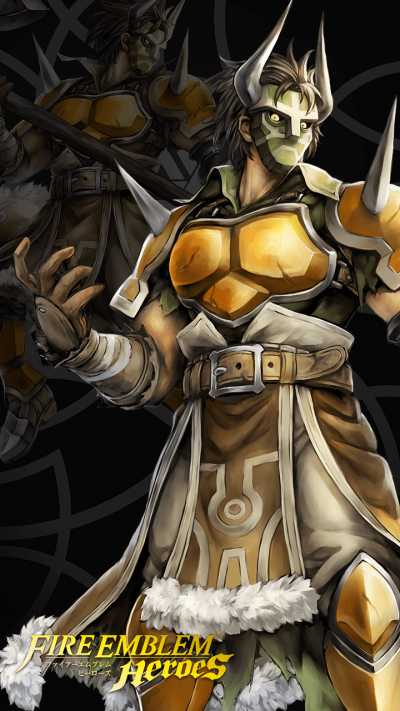