Community Posts with Keyword Lene All 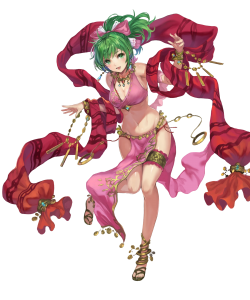 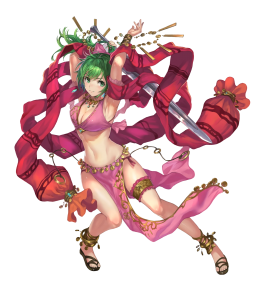 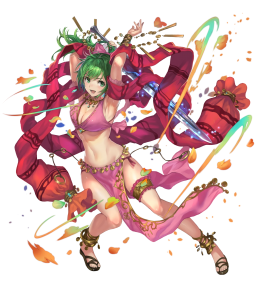 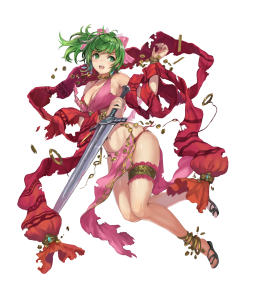 This build works to solidify Lene’s offensive combat ability through consistent and powerful Special triggers. The combination of Lene’s high Speed, the Wo Dao+ (+Spd) and Moonbow allows Lene to deal great damage in only a few engagements. This allows you to maximize Lene’s damage output while minimizing the risk of KO. +Spd is best to ensure that Lene can make follow-up attacks and avoid enemy follow-ups, but +Atk is a respectable choice as well.

The Wo Dao is Lene’s best choice for a weapon: the +10 bonus damage allows Lene to burst down foes who she would normally struggle against. Moonbow is the best choice for a complementary Special skill: in order to maximize the usefulness of the Wo Dao, Lene will want to activate her Special skill as often as possible. Moonbow provides strong bonus damage against high Defense foes that Lene would normally struggle against, all on a 2-turn cooldown for Lene to charge and trigger her Special in a single round of combat.

Of all Lene's available A slot skills, the best is probably Fury. Not only is the skill readily available, but it also grants offensive and defensive stat boosts which Lene desperately needs. With a +SPD boon, +Spd refinement and Fury, Lene can reach a fantastic 44 Speed, enough to ensure that she can avoid follow-up attacks from most offensive threats. Other possible alternatives include a Bond skill like Atk/Spd Bond, which can be a potent asset if Lene is also running the Atk/Def Bond seal, though this remains a hard sell given the cost of this skill.

Lene’s B slot has a lot of useful choices, and largely comes down to what role she needs to cover. Wings of Mercy is undoubtedly one of the best, as it allows Lene to near guarantee a useful dance on every turn. With that said, Firestorm Dance appears in her base kit and can be a great alternative for those looking to keep their heroes close. Firestorm Dance also complements a similar seal like Earth Dance, which can allow Lene to buff almost every combat stat with a single dance.

Lene’s C slot is also quite flexible and is best used to support her allies. If Lene's emphasis is on support, buffing skills like Drive Attack, Drive Speed, or a Tactic skill make for great choices. Alternatively, a more combat oriented skill like Atk Smoke or Even Def Wave can be powerful if Lene is likely to be fighting. For her Seal slot, Lene can opt for the aforementioned Atk Smoke, Earth Dance, or Atk/Def Bond depending on her role. The Speed +3 seal can also be taken in order to further stack her Speed stat. Otherwise, Lene’s seal slot can be utilized by a Spur or Drive of one’s choosing.

An Enemy Phase-oriented build revolving around the use of Lene’s inherent weapon, Safeguard, which gives her an impressive +7 boost to her Defense stat during  Enemy Phase. Taking a Speed boon is recommended here in order to reduce her chances of getting doubled and will thus further increase her overall survivability. With a Speed boon in addition to a Speed refine on her weapon, Lene will be able to avoid follow-up attacks from units with up to 45 Speed; this is particularly useful when taking into consideration the prominence of speedy sword units in the current meta. Keep in mind that skills like Bold Fighter completely disregard all of Lene’s Speed stacking, making it imperative that she avoid users of such skills at all costs.

For her Special, Moonbow is a fantastic option as its low cooldown allows it to activate frequently. Luna also makes for a decent alternative, granting higher damage output at the cost of higher cooldown. With Safeguard’s boost to Lene’s Defense stat in the Enemy Phase, Bonfire also becomes available to her and can be considered should one favor more consistent damage increase. If assuming it activates in the Enemy Phase, Bonfire can grant +15 damage on every activation.

Running Close Defense in conjunction with Quick Riposte allows Lene to abuse her weapon’s effect to its fullest extent; in addition to gaining a +13 Defense boost and +6 Resistance boost if attacked by a melee opponent, Lene gains a guaranteed double on the Enemy Phase regardless of her own Speed. If on an extreme budget, Fury may also be used but will force Lene to pick her fights  carefully as the chip damage will knock her outside of Quick Riposte’s HP threshold quickly.

It is recommended to use Quick Riposte in her seal slot in order to keep her B slot open to several options. Wings of Mercy is again an option due to the sheer flexibility it grants her team. Renewal is also available to her and grants Lene sustain, making it so that she can stay in Quick Riposte’s HP threshold more reliably. Her native Firestorm Dance may also be considered as a budget option. However, if one of her teammates covets the Quick Riposte seal, then she can run it in her B slot; her seal slot would then be open to either Close Defense to further enhance her ability to tank hits or to any seal that complements her team composition.

Lene makes her appearance in heroes as one of the faster dancers in the game, boasting a strong base 35 Speed. Like her playstyle in Fire Emblem: Genealogy of the Holy War, Lene's Speed and her ability to Dance make her an invaluable addition to a team: she can avoid follow-up attacks with relative ease and has reasonable enough damage output with a base 28 Attack; more than Silvia and tied with Olivia, where Lene’s superior Speed gives her the edge.

However, Lene suffers from poor base HP and mediocre defensive stats as the drawback for her low BST. Though Dance is an incredibly powerful Assist skill, it forces Lene into a poor BST pool, hurting both her combat and scoring potential. While many will value the utility of Dance enough to compensate for these penalties, it’s worth noting nonetheless. With that said, Lene is still a fantastic hero to have around for other game modes such as Aether Raids, Tempest Trials, and Hero Battles.

Overall, Lene is one of the most competitive dancers you’ll find among those without PRF weapons. With the right build and some smart play, she can be a valuable utility hero with passable combat skill to boot.

Lene’s greatest strength is her access to Dance, a potent skill that grants her the ability to refresh an ally’s turn. When used properly, Lene gives her team a significant advantage and can often make otherwise tricky situations into a piece of cake.

Lene’s base Speed stat sits at a nice 35, which provides a solid foundation for improvement. With a +Spd boon and weapon forge she can climb to the valuable mid-40 Speed mark, vastly improving her usefulness if she ever finds herself in a fight: Lene will survive many encounters where she avoids a follow-up attack, and may even KO the enemy if she can make one of her own.

Lene has a neutral BST of 149, which means she weighs substantially less in Arena than other infantry melee units; this BST cut causes her stat allocation to be overall weaker in comparison as well. In addition, she is currently without the choice of a Duel skill, unlike her competitors such as Performing Azura, making her comparatively weaker for those concerned about scoring.

Lene’s Speed is one of her greatest assets, but it has little impact on her survivability against foes with high Attack. With a mere 58 physical bulk and 63 magical bulk, Lene has little chance of avoiding KO, even after weapon forges and other stat boosts.