Community Posts with Keyword Libra All 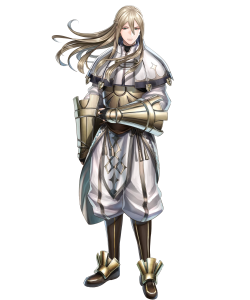 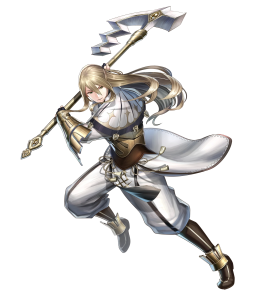 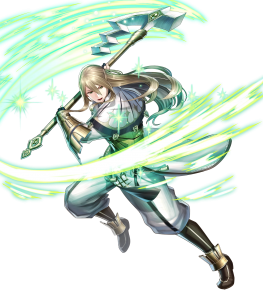 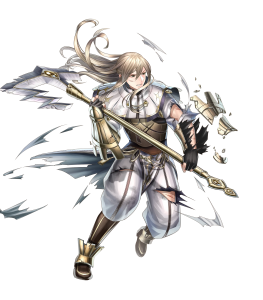 With no superboons and three superbanes all in defensive stats, Libra is a tough unit to get ‘perfect’ IVs for, and finding proper IVs for one build will likely sink his ability to run other builds appropriately.

With this build, Libra is capable of unleashing a powerful Bonfire on his first attack in Enemy Phase- as well as his second attack, if he’s doubled by his opponent.  The entire concept of this build relies on Steady Breath, though Warding Breath can work as well for a cooldown reduction in his A slot.

Through his IV, Sacred Seal, Steady Breath A slot, and forge, Libra can stack up to 45 Defense on Enemy Phase, which allows him to augment his counterattack with a 23 damage Bonfire after he’s initiated on- and due to his Slaying Axe and Steady Breath working in tandem then he’ll be able to stack cooldowns and activate a Bonfire again the next time he’s attacked.

The Wo Gùn can be used alongside Moonbow or Glimmer for a similar concept, if you’d rather not inherit a Slaying Axe onto him- it’s important to note that a Moonbow with +10 damage can outdamage Libra’s Bonfire if his opponent has over 39 Defense.

This build changes entirely if you run Wrath in his B slot, which would require you to then either run Quick Riposte in his Seal slot or increase his Speed, rather than his Defense to avoid double attacks.  This sacrifices a little of Libra’s tankiness on Enemy Phase in order to make him potent in both phases, allowing his attacks to become stacked with +20 damage if using his native weapon. This combines very well with an Aether Special and can give Libra some healing and sustain.

Libra can also use his above-average Resistance stat to land Ploy skills on other units.  This helps him utilize his C slot to further his combat ability, and while it won’t always land with 29 Resistance, it will definitely boost his capabilities against units who have less Resistance than he does.

With this set, Libra uses his above-average Resistance to counterattack mages who might think he’s an easy target. Because both of his defensive stats are lackluster, the focus here then becomes bringing his Speed up to an acceptable 38 to avoid doubles from mages, dagger units, and archers with under 42 Speed. This allows him to stretch his 28 Defense and 29 Resistance much further, while still giving him brutal killing power with Quick Riposte and a weapon that grants him bonus damage on his Special activation.

Distant Def will really help in keeping Libra up for longer, but if you’d like to run a skill like Wrath instead to increase his killing power significantly, then running Quick Riposte is essential in his Seal slot.

Both Moonbow and Luna are respectable choices here, with Moonbow winning out if not running Wrath or Slaying Axe.

While most of Libra’s stats are mediocre, Fury can help him to patch up many of his glaring weaknesses, offering him a Speed of 35 and both Defense and Resistance stats of over 30. This enables him to be a far more flexible unit on the battlefield and allows him to opt into a Speed-oriented build that can double many other units with ease.

Quick Riposte is kept for the units that he cannot double, though Lancebreaker could also be an option if you want to ensure that he can take down some of the faster Lance units that we’ve been seeing recently. Renewal is his default B skill, but synergizes decently with Fury, allowing him to heal up any damage incurred.

While this build doesn’t have a particular focus, it allows Libra to be versatile in both Player and Enemy phase, as a fast axe user with a not-insignificant amount of bulk.

The monk of Fire Emblem: Awakening makes his debut as an infantry axe unit, one of the more underrepresented ‘vanilla’ units in the game. Unfortunately, Libra doesn’t exactly make a massive splash, seeing as to how his stat spread is suboptimal for any sort of focused min-maxing that might have made him incredible.

Still, he can be quite versatile with the right builds, and the fact that he comes with the first summonable Wo Gùn+ helps him to further increase his potential combat damage.

Although this also works against him, Libra’s stat spread allows him to choose a role to focus on, rather than being locked into any one specific thing.

What he can do best relies heavily on his IVs, but he can be a decent Player Phase unit, Enemy Phase unit, or even Mixed Phase with the right setup.

Libra’s Resistance is abnormally high for an infantry axe user at 29.

While it’s difficult to properly utilize this outside of countering dragon teams or inheriting Distant Counter onto him, it proves useful in niche situations, such as running Ploy skills.

It allows him to function as a decent mixed tank.

Having more rounded stats means that Libra will not excel in any particular role.

It’s difficult to min-max him and makes him weaker at any of the niches he chooses to fill.

A Speed stat of 32 hurts- it means that Libra will have difficulty naturally doubling all but the slowest units and it is also too low for him to reliably avoid doubles from high-Speed units.

It’s difficult not to see his Speed as a waste of stats- he could have used a few points from Speed in any of his other stats to make him a more effective Enemy Phase unit.

"...but in the everlasting darkness there shone a light brighter than the sun itself. It flashed with unending vigor, reflecting off of any who stood alongside it. The more he bled, the stronger the light grew and renewed his strength with every swing. An unstoppable crusader imbued with great power. Libra: Herald of Purity."

(One half of my Yin/Yang build with Tharja).This build can work with any refinement of Ardent Service+, although I personally recommend (+atk) for more flat damage. It also works regardless of IVs as long as you have a HP bane. For example, my Libra has a res boon and he can still take on just about anything you throw at him. This is mostly due to the fact that as soon as he drops below 80% health he gains an additional +14 atk as well as +7 def/res and at 75% health his special does +10 damage. Ardent Service+, Joint Hone Spd and Rally Up Atk+ all let him support his entire team both offensively and defensively as well as buffing his own atk and spd. Sol can obviously be replaced with a more damaging special, but between the +18 atk and the +10 damage when he's missing enough health, Libra will have little trouble taking down almost anything in his way and will more likely than not find himself recovering 10-20 health with every use of Sol. It's also worth noting that while Wo Gún+ (+atk) will allow you to deal +20 damage on special triggers, Ardent Service+ (+atk) is able to raise Libra's atk to a solid 55 before dragonflowers and merges (58 if he has an Atk boon).

Heavy Blade works well with Libras high attack to cut down some of the charge time of Aether, which combined with Wo Gun+ effect deals massive damage and heals him up nicely. A +Atk nature and +Atk Weapon Refine both increase the damage/recovery from Aether and increase the reach of Heavy Blade.

Distant Counter and Quick Riposte are both taken to cooldown Aether faster - with Heavy Blade, it should be ready to go fairly often. Unleash it on fresh enemies where you can to keep his HP within Quick Riposte range. With Aether restoring his HP fairly regularly, a -Spd nature can be taken to let him be doubled for faster charge.

Atk Smoke 3 is kept for survivability, since he is going to be trying to tank.
Pivot is taken for maneuverability, but it is not sticky.

This build utilizes Libra as the War Monk that he is in Awakening in which he will function as both a passive healer and an offensive unit.

Initially, I wanted a budget support unit for AA, and I thought Libra would be a great candidate due to his great mixed defenses. Also, I wanted to fodder Ardent Service, since I never used Groom Marth. So Libra, being an axe user, seemed like a great choice. But it turned out that this build is extremely effective -- so much so that I'm considering +10ing him.

First of all, Ardent Service and Hone Spd combine to give adjacent allies +4/+4 attack and speed, making Libra a great budget buffer. He becomes an excellent teammate for offensive sword units like Ayra, Karla, Hana, or Athena, and can even buff blade tomes in a pinch.

Next, Libra's IVs (+spd/-atk) are excellently suited to this build. His speed -- 38 with a speed refine -- is enough to ensure he often won't get doubled, thus contributing to his defenses. Also, Spd Smoke in the C-slot helps him get doubles of his own, while also helping his teammates get doubles.

Triangle Adept and Guard combine to make Libra incredibly tanky against blues. He might be the best blue counter in my barracks. Literally no blue unit (besides Ophelia, I guess) is a threat against him. Guard protects him from Fighter skills and most specials, and Triangle Adept reduces damage from Blues, as well as giving him more damage of his own. This makes his -Atk IV very ideal, since having -Atk preserves his excellent 28/29 defenses and his great HP of 45. Also, those 28/29 are further augmented by TA.

All in all, this a wonderful build, and extremely effective at doing what it's supposed to do -- tank all blues and provide excellent ally support. You can safely leave him in range of Reinhardt, Legendary Tiki, etc., whlie buffing your offensive units with Ardent Service + Hone + Spd Smoke.

His weaknesses are obviously Red units and some other Green units, but since he's part of a team, this shouldn't really matter. If his part of a competently arranged team, he should have teammates ready to take care of the things he can't handle.

So if you're looking to give something different a try, I recommend this Libra build. He'll be a great addition to your AA team or your Arena core if you choose to +10 him.

One half of my death dealing duo, Libra is the wall that stands between Virion and instant death. By no means the most tanky unit in the game, he serves well as a fierce barrier that takes wonderful advantage of Virion’s softening up to finish what he started. Fury/Renewal keeps Libra going, reposition pulls Virion out of trouble, and threaten defense makes sure whatever Libra’s after isn’t too heavily fortified.

Laugh as you will, but by Naga’s grace, there’s not much of anything that gets past Libra.