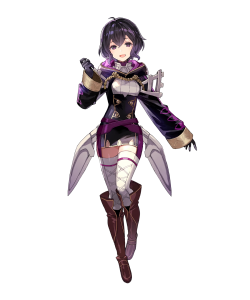 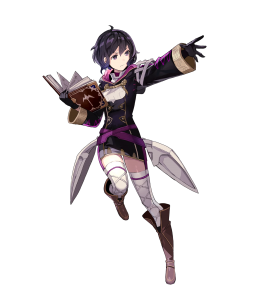 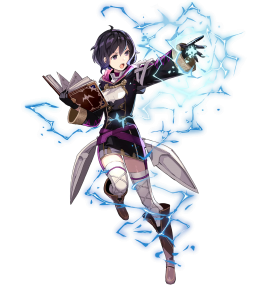 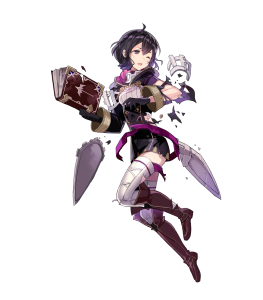 Thanks to Father's Tactics, Morgan is a highly flexible support with a lot of variation in build potential.

She can support allies with a buff build, or can utilize her Tome selfishly and use her allies to buff herself.

Her tome also allows her to stat stack, which works nicely with skills like Fury to give her excellent stats in all categories.

Morgan offers immense value to teams by virtue of being a flier, which grants her excellent positioning to apply her buffs.

Flier buffs allow her to become a fearsome Blade tome unit and can even help to salvage her Speed.

Being a flier also gives her good mobility, and she can use her ranged attack to ‘snipe’ people from a safe position over water or lava.

Having a Speed stat of 30 means that it’s technically salvageable, but will not be as effective offensively as Summer Camilla's 36 Speed.

While it’s too low to take full advantage of, it’s also high enough that it actively saps valuable points from other potential stats that could use it more- her Defense, Attack, or Resistance, for example.

She can get to a point where she can prevent doubles against her, but it is very difficult for Morgan to reliably double many of the faster units in the game.

The unfortunate truth is that Blue units are oversaturated with offensive powerhouses, and this is remarkably evident when looking at fliers.

On a flier team alone, Morgan has to compete with powerhouses such as Cordelia, Tsubasa, and Summer Camilla for a blue slot.

This is worsened by the fact that blue is a poor color of choice for a Resistance tank, given that the most threatening mages tend to be blue or green.

【 Weapon 】
• Father's Tactics is Morgan's unique weapon, and she can use it to best effect with a high Res stat. If her Res is higher than her opponent's, she gets a +4 stat boost across the board, and an additional Atk/Spd +3 if she's within two spaces of an allied unit, for a total of Atk+7/Spd+7/Def+4/Res+4 regardless of combat phase.

【 Assist 】
• Reposition is an old standby, and works very well to help snatch allies out of danger.
• Draw Back is a good alternative if that fits your play style better, and can keep Morgan out of the range of foes she can't counterattack.

【 Special 】
• Iceberg is her native option, and it scales off her decent Res stat, allowing her to take a good chunk out of opponents. Her A skill will only increase the damage.
• Glimmer is available as a low-cooldown option, but it won't take advantage of the vastly higher damage Morgan could be doing with her Res stat.

【 A Skill 】
• Mirror Impact is definitely an expensive skill; at the time of this writing, it's only available on three units, all 5★ exclusive and none of whom are available in the normal summoning pool. That said, Morgan makes great use of it on this set. It grants Atk+6/Res+10 upon unit initiation — not only granting a boost to her raw damage output with her attack stat, but also boosting the damage of Iceberg when it fires off and increasing the likelihood of Morgan's weapon effect activating to boost her stats. It also prevents enemies from making a follow up attack, which is invaluable considering Morgan's middling-to-low Spd.
• Mirror Strike 2 is Mirror Impact's precursor. It's not nearly as good — offers Atk/Res+4 on initiation with no cancellation of foe's follow up — but it'll serve in a pinch, upping Morgan's chances of activating her spectrum stat boost and marginally increasing Iceberg's damage.
• Death Blow 3 is another cheap option, but it doesn't boost Morgan's Res (and therefore has no effect on her weapon activation/Special damage) nor does it prevent her opponent from making a follow up.

【 B Skill 】
• Chill Res 3 is a skill that partially depends on your team composition. While Morgan definitely benefits from docking points from an enemy's Res to help her inflict as much damage as possible, and a lower enemy Res helps activate her weapon, if the rest of her allies deal physical damage, then the team as a whole might be better off with a different skill.
• Sabotage Res 3, or any Sabotage skill, is a good bet given Morgan's high Res, as they depend on Morgan having higher Res than foes who are adjacent to one another to inflict a debuff. Whatever stat debuff suits your team make-up best would work well on her.
• Flier Formation 3 or Aerobatics 3 gives Morgan more movement options, allowing her to swoop in to pick off a foe that an ally might be struggling with.
• Guard 3 is very useful and comes packaged with her, so there's no reason not to use it if other skills aren't working for your team.

【 C Skill 】
• Atk Ploy 3, or any Ploy skill, is a good choice with Morgan's Res, allowing her to cripple foes from a distance.
• Odd Atk Wave 3 can be obtained via Grails from 4★ Spring Bartre (or from Summer Laevatein if you're already sacrificing her for Mirror Impact) and extra attack power is always handy. If you're using Morgan on a Flier team, though, she might not need the boost if an ally is running Hone Fliers.
• Ward Fliers if Morgan is on a Flying team is equal to Hone Fliers, Fortify Fliers, or Goad Fliers — it just depends on what you need.

【 Sacred Seal 】
• Swift Sparrow 2 gives Morgan an extra boost to both Spd and Atk, increasing her doubling potential and therefore her damage output. Her base speed with this build, assuming she procs all bonuses, will go from 30 to 41 when initiating combat (assuming neutral IVs and no merges nor flowers).
• Chill Res 3 is a good option if you're not using it as her B skill, softening foes up to her attacks and boosting weapon activation. Other Chill seals can be used as well to suit the rest of the team.
• Sturdy Blow 2 boosts Morgan's Def when initiating, which can help her survive counterattacks from physical units. (I still wouldn't suggest throwing her at bows unless she OHKOs them, though.)
• Heavy Blade 3 is a decent choice, as Morgan should usually be getting a +7 Atk boost from Father's Tactics if she's positioned correctly, as well as +10/+4/+6 depending on her A skill, which (with neutral traits and no merges nor flowers) would put her at 65/59/61 Atk. Not stellar without Mirror Impact, but far from awful.
• Phantom Res 3 helps ensure that Morgan gets her +4 spectrum boost from her weapon — doubly so when combined with Mirror Impact.

+Spd at lower merges, +def for higher merges. This build with +def and max merges pushes her bulk to 47/47, making her very bulky and fixes her terrible speed stat, which makes it even harder to kill her. Her A and seal slot are the big winners here in terms of skills, as you only need Sturdy impact and Sturdy blow to make this build very effective, adjust B and C slot to your preference.

The tried and true Fury-Desperation build, this build capitalizes on the immense buffs Morgan gets from her new tome, Father's Tatics.

First of all,either of the 2 boons are essential to this build, Res and Spd. Res boon ensures that Morgan can have an easier time proccing her weapon effect while Spd gives more consistency should her weapon effect fail to activate.

Fury gives Morgan the stat boost she needs, boosting all her stats (excluding HP) by 3. With the recoil, she can easily activate Desperation, allowing her to easily kill before the foe can retaliate.

With the Fury boost, Morgan's Res is boosted to 36 (39 with Res boon), which she can use to activate Res Ploy. Res Ploy helps Morgan in 2 ways, first it boosts Morgan's damage output. Second, it makes it easier to activate her weapon effect. If you're not running Res boon, you can swap out with either Atk/Res Oath or a support skill like Drives or Waves.

Brazen Atk/Spd is the seal of choice. Once activated, Morgan can dish out major pain and is hard to be outsped.

This build only really works on a flier buff team, specifically one with Hone Fliers. Combining a Swift Sparrow 2, Blarblade, and Guard 3 helps reduce damage taken, while everything else increases damage output, especially on a flier team.

(+2 Morgan, stats will differ from unmerged)
An all out Res focused build, without skills or buffs, Morgan can reach 37 Res fairly easily, with buffs Morgan easily breaks 40 Res, and with the Triple Distant Defense, Morgan reaches an astonishing 55 Res! (61 with buffs)

Even her defense is fairly respectable, landing at around 30 (36 with buffs) the only thing that can possibly make a dent in the Res Wall will be Gronblade/Blárblade blade users and Triangle Adept Green Mages

Quick Riposte is used to make up for her lack of speed, and is needed to reliably double and check all of the fast mages running rampant.

Atk Ploy is used not only to abuse Morgan’s ridiculously high res, it’s also used to make Morgan’s Res tanking even more potent (if the enemy is successfully debuffed.