Community Posts with Keyword Myrrh All 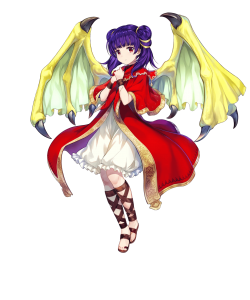 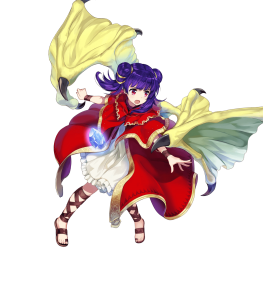 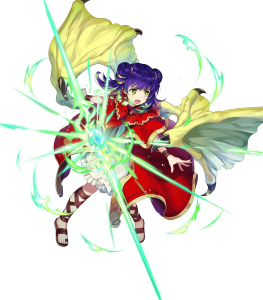 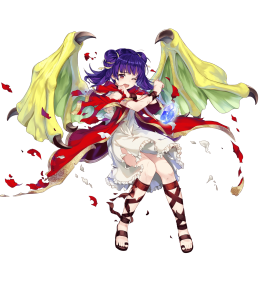 To make the most of Great Flame, Myrrh wants a Defense boon - and because Great Flame prevents her from being doubled and her Speed is naturally too low to double in return, she will gladly dump her Speed if possible. Her Attack is excellent as well, so she’d also benefit from an Attack boon, particularly if she replaces her weapon or uses Heavy Blade. If opting for Lightning Breath, her Resistance is a good boon choice, but Great Flame is so powerful that it’s worth finding the IV to match it.

Pack it up folks, nothing to see here.

This is Myrrh's bread and butter set, the obvious meta-born build that turns Myrrh from a sweet dragon child to an unflinching bastion of destructive power.

The set itself is simple and self explanatory: Myrrh's Great Flame makes it virtually impossible for her opponents to double her without making a detrimental Defense and Speed check - detrimental because she attacks into Resistance, making the minimum 41 Defense requirement entirely wasted in actual combat. If it's not possible to double her, then her opponent must rely on oneshots to chew through her 40+ Defenses and 40+ HP.

Distant Counter and Iote's Shield creates a synergy that negates Myrrh's flier weakness and allows her to retaliate at range, which can help her tank for any flier team and eliminate pesky enemy archers for her more vulnerable teammates. Quick Riposte is again obvious because Myrrh does not have enough Speed to double naturally without significant investment, which is counterproductive to her playstyle.

Pulse Smoke is her ideal C slot for Aether Raids, as it helps her to counter enemy teams utilizing Infantry Pulse or Galeforce strategies. For more general use, Attack Smoke is sufficient.

For a more melee focused Myrrh, she can utilize Sturdy Stance in her A slot instead of Distant Counter. This gives her additional Defense and Attack, making it even more difficult for her opponent to double her through Great Flame and allowing her to do more damage. The Guard effect of the skill reduces the need for Pulse Smoke in her C slot, though it's still useful against Infantry Pulse teams.

One of the major complaints about using Myrrh is that because of her dual weaknesses, her seal slot is almost always dedicated to Iote's. However, as there are only a few meta archers in the game right now, she doesn't have to focus on being the omni-counter and instead can turn her sights over onto mages by bolstering up her Resistance with Distant Ward and Mirror Stance.

This build specializes in both melee engagements and taking out mages who are highly unlikely to have enough Defense to double her. With this build, Myrrh gets +9 Attack and Resistance when attacked and further gets +4 Attack when she has an ally within two spaces - which she should, since that also fulfills her Great Flame prf requirements. When factoring in her Great Flame spectrum buffs, Myrrh essentially gets +19 Attack and +14 Resistance of in-combat buffs, which is more than enough to tank and retaliate on just about every mage in the game.

With little investment into her Defense, it might seem as if she's vulnerable to being doubled, but her Great Flame's refined effect is typically more than enough to prevent her from being doubled, given that her opponent needs 41 Defense and 35 Speed to double her. Still, you can use Steady Stance or Sturdy Stance in her seal slot to make the stat check even more difficult for her foe.

As the first hybrid dragon / flier type unit, Myrrh comes with a good stat spread, a fantastic native weapon that works well with her stat distribution, and the ability to synergize with almost any team.  While her Great Flame’s effect prevents enemy doubles on both Player and Enemy Phase, it’s more advantageous to use her as an Enemy Phase unit, as Quick Riposte will ensure that she attacks twice.

Of course, her Defense is the most important thing about her, as it bolsters her ability to negate doubles against her. This makes it vital to focus on when building her as a unit - skills such as Steady Stance, Atk/Def bond, and other Defense-boosting skills are good to run on her as they help to broaden the gap between her Defense and the Defense of the units she’ll be facing.

Overall, Myrrh is an incredibly resilient unit who packs a significant amount of firepower and has a unique synergy with most units, as well as a playstyle that allows her to safely attack during her player phase, unlike many other enemy phase tanks. It’s difficult to think of a good reason not to put her on the field - she’s more than earned her spot on almost any team.

Myrrh's Great Flame prevents doubles on her if the enemy’s Defense is 1 or more below hers while granting her Atk +3. The refine further disables enemy auto-followup skills when certain conditions are met, ensuring that she will not be doubled unless her opponent defeats her in a raw stat check of both Defense and Speed.

This already seems difficult at a glance, but with her Great Flame refine, Myrrh gains an additional +5 to all of her stats when above 25% HP and with an ally 2 spaces away. This bolsters the amount of stat stacking an opponent has to do just to double her naturally.

The beauty of this weapon is that it relies on her opponents to stack their Defense in order to have a chance at doubling her - but she attacks into Resistance, making Defense stacking useless in terms of how much damage her enemy takes. This forces her opponents to stat stack just about everywhere in order to have a chance at taking her down, and one rounding her is virtually impossible without double-effective weapons (such as a Falchion), or significant debuffs and Attack stacking (such as with Lysithea's Hades) to oneshot her through her formidable bulk.

Myrrh can give and receive buffs meant for both dragons and fliers, meaning that she can be optimally run on exclusively flier or dragon teams. She can also slot into a beast team since she doesn't prevent them from transforming.

She can also use Guidance and Hone Dragons on a dragon team, and is able to Reposition her teammates over trees, rivers, and mountains.

Her stats are built optimally for the Great Flame, lowering her Speed for a tanky 36 base Defense and a respectable 31 Resistance. Despite Speed being her dump stat, 25 Speed is also very helpful to her, as it prevents her from being doubled by slower enemy tanks who can beat her Defense check.  On a neutral Myrrh with no outside buffs or skills and Great Flame active, her opponent must have 41 Defense and 35 Speed to double her.

Myrrh’s dual unit typing doesn’t come without its drawbacks - she also shares the weaknesses of both dragons and fliers.

She is weak to bows, Excalibur tomes, and the myriad of anti-dragon weapons. While the first two can be mitigated somewhat with Iote’s shield, it requires sacrificing a seal slot or A slot to do so.

Myrrh shares Fae’s extreme weakness to red dragonslayers and can be defeated easily by Falchion users.

Myrrh relies heavily on her Great Flame to protect her from enemy doubles, as her own base Speed of 25 is quite poor. If she is outside of her prf's requirements (below 25% HP or more than 2 spaces from an ally) then she loses her spectrum buffs and can be doubled by an auto followup weapon.

In addition, Myrrh will also be unable to reliably double during Player Phase. The only way she can reliably double her opponent on Enemy Phase is through a skill like Quick Riposte. 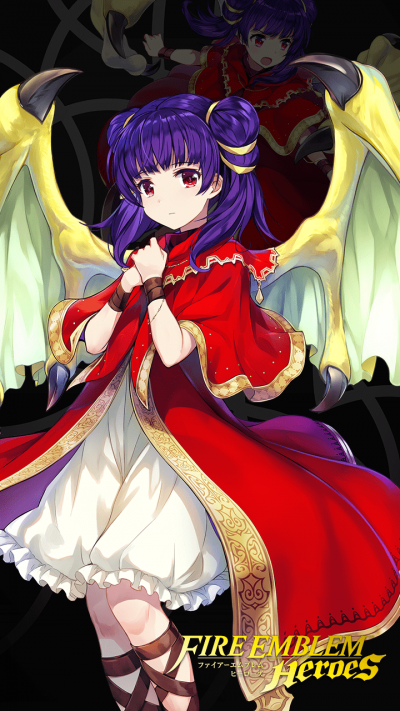