Community Posts with Keyword Naesala All 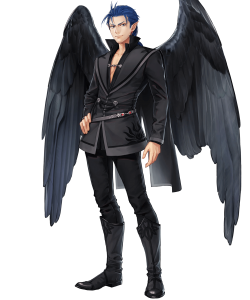 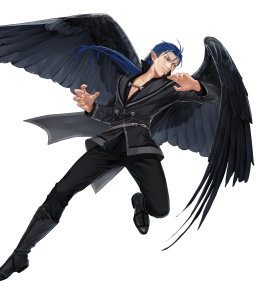 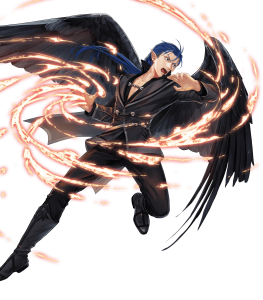 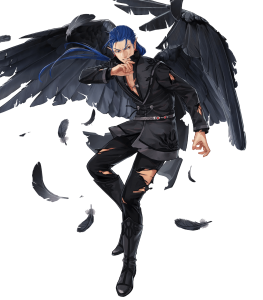 By merit of his strong offensive stat spread and powerful personal weapon alone, Naesala possesses incredible combat prowess, performing at his best when equipped with an all-out offensive build. However, since his status as a Grand Hero Battle unit does prevent him from attaining IVs for further specialization, Naesala benefits greatly from receiving any kind of team support to either of his offensive stats as to bolster his overall effectiveness further, though he can still perform admirably without it.

His unique personal weapon, Raven King Beak, complements this build’s offensive playstyle excellently, granting him a tremendous damage boost based on the Speed difference between him and his opponent, as well as a flat +3 Speed increase; when transformed, this weapon also allows Naesala to benefit from an additional boost to his movement and Attack to bolster his combat prowess further. For his Special, Moonbow is a strong option thanks to its relatively low cooldown allowing him to make use of it fairly often, though Luna can also be considered to provide him with higher damage output increase upon Special activations; it will, however, necessitate the use of the Heavy Blade seal in order to activate at the same rate as Moonbow.

Naesala has a variety of different options for his A slot, most notable of which being Atk/Spd Solo. Providing him with a massive +6 in-combat boost to both of his offenses, in addition to boasting an easy to meet activation requirement, this skill allows him to fully maximize his offensive presence and is his best overall option. However, given its extremely scarce availability, Naesala’s native Swift Sparrow will work just fine in most scenarios, granting him a comparable boost to his offenses upon initiation. At the cost of losing out on some of Atk/Spd Solo’s and Swift Sparrow’s raw power, one can take Fury as his chosen A slot skill to similarly enhance his offenses but also give his bulk a much-needed increase simultaneously. Brazen Atk/Spd and Life and Death can also be considered viable alternatives when provided with adequate team support.

Naesala’s overall bulk is reasonable enough such that he is not particularly reliant on Desperation to fulfill his role as an offensive nuke, thus opening up his B slot to several other options. In particular, Chill Spd is a fantastic option that allows him to effectively shut-down opposing speedsters through its substantial -7 debuff to the fastest foe on the opposing team, granting him greater doubling potential as well as allowing him to better maintain Raven King Beak’s bonus damage; it also has the added benefit of potentially providing team support. Alternatively, Chill Def can be taken to strengthen Naesala’s and fellow Defense-targeting teammates’ raw damage output, ultimately being the preferable option when already providing him with a significant amount of support to his Speed stat as having anything more than a 10 Speed advantage is overkill. That all being said, Desperation makes for a suitable choice of B slot skill on a budget to allow him to safely engage in extended rounds of combat even after sustaining serious amounts of damage.

For his C slot, Odd Atk Wave and Even Spd Wave are two noteworthy candidates that enable him to be much more self-sufficient while also being able to provide an adjacent ally with a considerable boost to one of their offensive stats on odd and even-numbered turns respectively. If utilizing Fury as his chosen A slot skill, Naesala can make surprisingly effective use of Ploys with the decision of which to use ultimately boiling down to a matter of personal preference. Otherwise, feel free to use any C slot skill that best suits his team’s needs.

Aside from the Heavy Blade seal, the Phantom Spd seal is a surprisingly powerful option on Naesala, pairing exceptionally well with his PRF to virtually guarantee that he can consistently benefit from its maximum +7 damage in each round of combat -- do keep in mind, however, that Phantom Spd does not actually improve his ability to perform follow-up attacks and will be useful solely for activating Raven King Beak’s effect. The Atk/Spd 2 and Speed +3 seals are also good alternatives to complement this build’s offensive playstyle further.

Thanks to the sheer power that he can attain through Raven King Beak’s potential +7 damage boost, Naesala can forego the use of an offensive Special entirely and opt for a Galeforce set-up instead. However, in order to circumvent the Special’s otherwise long cooldown, it is of the utmost importance that Naesala is equipped with the Heavy Blade seal as to ensure that he will be able to activate it each turn, provided that his opponent can counterattack and that he performs a follow-up attack. Furthermore, this also means that accompanying buffs to his Attack stat are vitally important to maximize his potency, being arguably more important than support to his Speed with this build. Nevertheless, aside from a few alterations, this build plays fairly similarly to the previous one and revolves mainly around capitalizing on his strong offensive potential.

The crux of this build lies in the choice of his Special: Galeforce. Possessing a hefty five-turn Special cooldown, Galeforce essentially functions as a self-refreshing Special and enables Naesala to take another turn after combat once per turn upon activation -- combined with his fantastic mobility and the Heavy Blade seal, this Special allows him to gain nearly unparalleled maneuverability in the Player Phase, granting him the option to either quickly finish off another foe or retreat to safety.

Atk/Spd Solo, Swift Sparrow, and Fury are all wonderful choices for his A slot once more, with Life and Death and Brazen Atk/Spd being good options as well when providing him with the prerequisite support. For his B slot, Chill Atk is a worthwhile consideration to strengthen his ability to consistently activate Heavy Blade and trade blows with opposing foes, debilitating the foe with the highest Attack stat with its significant -7 Atk debuff. Otherwise, Chill Spd remains a stellar option that serves to simultaneously augment his ability to both perform follow-up attacks and activate Raven King Beak. Alternatively, one can utilize Hit and Run to provide him with more defensive options and increase his likelihood of being able to escape his opponent’s reach after activating Galeforce.

Even Spd Wave and Odd Atk Wave are again strong options that serve to augment Naesala's offensive potential further through their significant +6 offensive boost on even-numbered and odd-numbered turns respectively. However, it is not a necessarily required for Naesala to function and can simply be replicated by providing him with team support. Lastly, Spd Smoke and Def Smoke are excellent choices as well, pairing wonderfully with Galeforce to more efficiently take down multiple foes in a single turn.

Naesala’s unique personal weapon, Raven King Beak, enables him to function as an exceptional source of damage output, granting him a substantial damage boost based on the difference between his and his opponent’s Speed.

In addition to providing him with a good foundation for performing follow-up attacks, Naesala’s remarkable base Speed stat of 38 allows him to make reliable use of his unique weapon to consistently deal outstanding amounts of damage.

Despite his statline’s strong focus on his offenses, Naesala’s mixed bulk of 63/68 respectively is surprisingly decent and will generally be more than enough to prevent him from being OHKO'd outright.

As a flier, Naesala has access to excellent mobility and class-exclusive buffs, both key strengths that can be used to bolster his offensive presence tremendously.

Naesala’s status as a beast unit complements his offensive potential greatly, gaining an effective +1 movement and +2 Attack when transformed. In addition, this also allows him access to even more class-exclusive buffs such as Hone Beasts.

Naesala’s status as a flier renders him extremely weak to arrows and will undoubtedly succumb to any competent archer’s attacks.

This is a swift offensive build for Naesala. I have him paired with Reyson, so he doesn’t often have to worry about dying due to his low defensive stats, since Reyson can use sing for him to escape. Vantage is for situations where Reyson can’t reach him and he’s forced to hold out against enemies. And Astra, well... it’s more damage output. Chill Spd and Drive Spd could both be replaced, although Chill Spd has certainly been helpful. Those two are there mainly to compliment Reyson and keep him standing. Their builds both function well enough alone, but since they’re so much better together, it’s hard to discuss one without discussing the other (Reyson is also on my profile if anyone wants to see him).

This build specializes in syenergy with Naesala's weapon and it's effect.

Reposition is used for saving heroes from death across the map.

Luna is used to just make it past bulky defenses.

Atk/Spd Solo goes perfect with his weapon effect, doesn't require initiation, and it is an upgrade over Swift Sparrow.

Desperation due to his high speed and good enough bulk to tank at least one hit.

Odd Attack Wave for patching up his decent attack, syenergy with his weapon, and turn 1 bird nukes.

Brazen Atk/Res to make his attack and bulk even higher when he's in desperation range.

Due to his mediocre defense, a desperation build is highly effective and almost necessary to keep Naesala alive.

Ardent Sacrifice or Reciprocal Aid is key, allowing Naesala to get below the 75% HP threshold to activate Desperation and Brazen skills.

Moonbow or Iceberg is the special of choice. Due to his naturally higher Res and possible boost from Brazen Atk/Res, Iceberg is passable and deals more damage, but has a higher charge time. Moonbow is typically better for this reason, charging faster and helping break down higher Def threats.

The A skill slot is dedicated to his native Swift Sparrow, Atk/Spd Solo or Brazen Atk/Spd. Swift Sparrow is a budget option, but also has the benefit of activating at the start of the battle. Brazen Atk/Spd 3 has the downside of having an HP requirement, but comes with a bigger boost and being active in both player and enemy phase. Atk/Spd Solo is another option, since the 3 movement allows Naesala to travel far from his allies.

The B skill is Desperation 3, allowing Nasaela to circumvent his low Defense and double the opponent before they can answer.

In case you do not enjoy the use of Fury, I have included alternatives below the explanation.

Naesala&#039;s impressive stat line speaks for itself with this build. With a hugely impressive 48 Atk and 41 Spd when transformed, Naesala is able to take on most threats to begin with. With the addition of Fury 3, he is able to push his offensive stats to an impressive 51 and 44 when transformed at the cost of his HP, sacrificing any chance of long term sustainability.
However, he does gain 27 and 32 to his defensive stats making him able to shrug off incoming damage from attacks, assuming follow-up attacks don&#039;t occur or he takes a special attack.

Demote Kamui theorycraft
Kamui: Steel Amidst Sand Infantry Sword 44/35+/41-/30+/26 Duelist Blade+: 14 Mt. At…
Ideas for a Legendary Byleth
Byleth: Wandering Flame Ruler of the United Kingdom of Fódlan. After slaying the…
Concept: what if there was a route that involved all Three Houses?
This idea has been floating around in my mind for a bit, and I want to give the…
Rip to the 8 B.Hectors
That I had foddered way before his refine, where now he could have been +10 Screenshot…
GP community appreciation - and FEH as a whole I guess
There have probably been a lot of such posts around over the course of GP history, but…
Read More