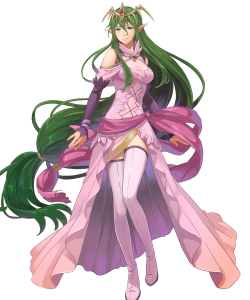 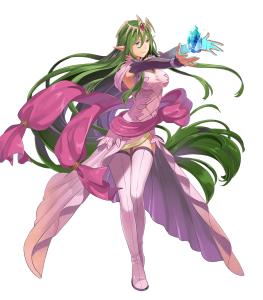 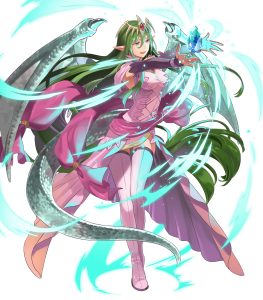 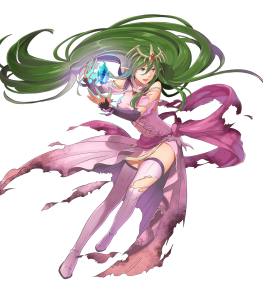 With the combined power of her unique personal weapon and well optimized statline, Nagi’s sheer durability is exceptional and enables her to excel when equipped to perform as a defensive tank. A +ATK IV is a fantastic option (and is likely ideal) if making use of healing Specials, as increasing her damage output results in improved sustainability; this also allows her to OHKO incoming opponents with greater ease. A +DEF or +RES IV are also great candidates to reduce the amount of damage Nagi takes directly, with both having the capacity to boost her stats by four points (as opposed to the typical three).

Out of the Ashes (Mixed Phase)

Nagi can also perform quite well when equipped with a standard mixed-phase build to establish herself as a force to be reckoned with on the offensive and defensive. Since the focus of this setup will be primarily to maximize her damage output, a +ATK IV (in addition to accompanying boosts to her Attack stat through team support) will be Nagi’s ideal choice of IVs.

A character shrouded in mystery, Nagi: Dragon Avatar makes a surprise appearance in Fire Emblem Heroes and debuts as a powerful green armored dragonstone user boasting some of the strongest defensive capabilities seen to date. Her statline alone is thoroughly impressive; with excellent values in HP, Attack, Defense, and Resistance (the last of which being the highest in the entire game), she has no shortage of offensive might or durability. This is not to mention her access to the incredible Fighter skills as an armored unit, which she can equip to utilize her min-maxed statline to its greatest potential and bolster her overall performance massively.

However, Nagi’s single most defining feature is her exclusive weapon, Ethereal Breath. It carries several distinct, albeit varied, effects that collectively make the mysterious maiden one of the most specialized (yet equally potent) dragonstone users around; combining dragon effectiveness, an 80% damage reduction from AoE Specials, and the ability to boast Weapon Triangle advantage over colorless foes all into one weapon enables Nagi to easily maintain high levels of survivability and shut down a vast number of prominent threats in the current meta, such as (but certainly not limited to) Legendary Alm and Ophelia. As if this weren’t enough, Ethereal Breath also comes as one of the few dragonstone weapons in the game to carry a built-in Slaying effect. This grants her a distinct advantage over the rest of her direct comparables, with this being particularly noteworthy when using healing Specials as her options for obtaining consistent sustain are much more flexible. Her PRF retains the typical adaptive damage property associated with dragonstone weapons as well, strengthening her ability to handle ranged opponents even further.

It should be noted that although Nagi definitely possesses several distinct strengths in her favor, she has her fair share of drawbacks that prevent her from being truly perfect. Most notably, as an armored dragon, Nagi suffers from a pressing weakness to two types of effective damage, with sources of dragon effective damage becoming increasingly more common as the game goes on; taking steps to avoid such sources will prove crucial to ensuring her success. In addition, her poor Speed means that she will almost always be doubled by incoming threats, and can cause her to take more damage than necessary without the adequate support and investment. Her poor mobility may also be a problem if not accounted for properly.

Nonetheless, despite these weaknesses, her overall potential should definitely not be underestimated. With a fantastic personal weapon in Ethereal Breath, incredibly min-maxed statline, and access to powerful armor-exclusive skills, Nagi: Dragon Avatar remains a shining example of what it means to be a stalwart defensive hero and can undoubtedly prove to be a useful asset at one’s disposal, even at lower levels of investment.

Nagi’s unique personal weapon, Ethereal Breath, carries a handful of different effects: a Slaying effect, Weapon Triangle advantage over colorless opponents, effective damage against dragon foes, and a substantial damage reduction from AoE Specials. Incorporating them all into a singular weapon enables Nagi to function as a formidable counter to an extremely broad range of foes easily and obtain outstanding defensive capabilities.

Her base Attack stat of 37 is considerable and provides her with a strong foundation for dealing damage, allowing her to frequently secure OHKOs against incoming foes when provided with the proper support. In addition, this makes her a strong user of healing Specials for consistent sustain, especially when taken into consideration alongside her PRF’s built-in Slaying effect.

Nagi’s mixed bulk is amongst the best of her class; with 82 physical bulk and 87 magical bulk, she is well suited for a defensive role and should have relatively little problem with tanking most forms of sustained offensive pressure. Her access to a four-point Asset in both of her defensive stats only serves to bolster this strength further.

As an armored unit, Nagi is able to access class-exclusive buffs and the notorious Fighter skills (such as her native Special Fighter), both of which can prove to be key strengths augmenting her overall potential to its fullest extent. This also allows her to benefit from an ample boost to her BST.

On top of granting her access to even more class-exclusive buffs, Nagi’s status as a dragon provides her with the unique ability to deal magical damage against melee opponents, as well as target the lower of ranged opponent’s defensive stats (more commonly known as adaptive damage).

Nagi’s base kit is extremely synergistic and makes her quite budget-friendly, as simply equipping an Assist skill and seal of one’s choosing allows her to have a complete (and fully functional) build.

Although being an armored dragon is one of Nagi’s greatest strengths, it also renders her astoundingly frail to two types of effective damage. Given the increasing commonality of sources of such damage in the enemy team compositions, one must take caution when deploying Nagi on certain maps as she may otherwise be killed unexpectedly.

Nagi’s poor base Speed stat makes her rather susceptible to follow-up attacks from opposing foes. While her strong defensive stats do help mediate this weakness to a certain extent, it can still create some complications by potentially causing her to take more damage than necessary.

In exchange for the various strengths associated with being an armored unit, Nagi’s class type hinders her mobility greatly by limiting her to one-space movement. This means that if using her without the proper support (such as Armor March, Ground Orders, or Guidance), Nagi will struggle tremendously in maneuvering around any given map, though this is not too much of an issue if equipped with a defensively oriented build.

[b]Preferred IV:[/b] +ATK or +RES or +DEF / -SPD
An ATK boon is preferred as boosting her already high attack gives her a much higher chance at OHKO any enemy who would dare think to attack her. However, if this isn't available, RES or DEF can be taken as increasing her bulk is never a bad option. RES is preferred as boosting it increases Iceberg's damage further, resulting in more damage all around. DEF can be taken as it is a super boon, giving +4 DEF and an incredible mix bulk of 40/41. As with most armored units, reducing her speed is generally beneficial, allowing her to be doubled by most units to gain more special charges for drastically increased damage.

Weapon: Ethereal Breath
The new Breath on the block, Nagi's PRF Ethereal Breath brings an entire page worth of text to the battlefield. Accelerating her special trigger allows her to retaliate with Iceberg after being struck first when paired with her inherent Special Fighter, likely insuring a OHKO with her great base ATK and massive RES. Furthermore, the Raven Tome, anti-Dragon, and green unit effect of this weapon makes her a massive counter to the current colorless, ranged, or dragon meta. Reducing damage from enemies like B!Veronica, L!Alm, Eir, Reinhardt, Ophelia, and even F!Tiki and L!Tiki alike, while retaliating with a color or type advantage makes her OHKO more likely than ever. And if all that wasn&#039;t enough, the 80% damage reduction to AoE specials allow her to shrug off Blazing special users like Ophelia and Sonya almost entirely, finally giving a counter to these Aether Raid queens.

Special: Iceberg / Aether
Thanks to her PRF, Iceberg drops to only requiring 2 charges to activate. Pairing this with Special Fighter allows her to strike back with Iceberg after every hit, and with low speed and Quick Reposite, insures two Icebergs per fight, guaranteeing a knock out against almost any foe.
Aether can be taken over Iceberg for more sustain. Thanks to her accelerated special trigger, reducing Aether's cost to 4 charges, she can almost guarantee an activation per battle due to her low speed and Special Fighter/Quick Reposite passive assistance. This allows her to stay in Quick Reposite range longer and sustain past some of the harder hitting enemies. However, this drastically reduces her damage output, due to Iceberg's low cool-down allowing her to strike back with her special after being struck every time.

Passive A: Distant Counter
By far the best in slot, her inherent Distant Counter allows her to retaliate at any range, building her own special charges while reducing her enemies.

Passive B: Special Fighter / Bold Fighter
Special Fighter's amazing offensive and defensive capabilities give Nagi the advantage against most unfavorable match-ups, allowing her faster specials and preventing enemies from charging their own against her.
Bold Fighter can be taken over Special Fighter if one wishes to always follow-up attack while both attacking and defending with Quick Reposite. However, this reduces her survivability by removing the Guard effect Special Fighter offers.

Passive C: Ward Armor / Armor March / Ward Dragon
Nagi can function as a strong unit in either a Dragon or Armor team setup. Due to her movement restriction of one space as an armored unit, it is advised to have some sort of mobility assistance through either pairing her with an armored ally with Armor March, or a flier bolstering Ground Orders.

Sacred Seal: Quick Reposite
Quick Reposite is a requirement if Nagi wishes to double bulkier units who attack her. Otherwise, she suffers the chance of not OHKO with her first Iceberg retaliation and being doubled herself.

This is Full enemy phase nagi and with the objective to maximize her good mixed bulk, it would be easier to buld if nagi didnt had special fighter in the base kit REEEEEEEEEEE.
Also, if you manage to pull a +res -def nagi this build can fix that stat if you worry too much about it