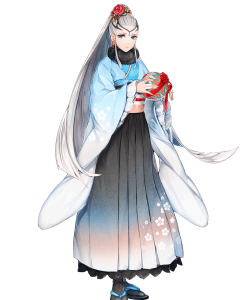 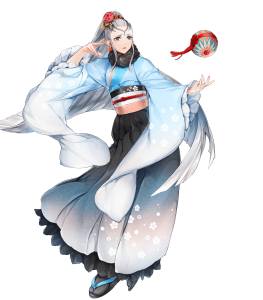 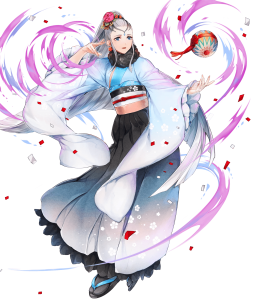 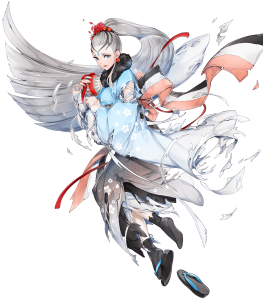 It's difficult to breathe this Eir... (Combative Debuff Support)

Eir’s high 36 Speed bolsters her offensive and defensive capabilities by increasing her chances of performing follow-up attacks and avoiding enemy follow-up attacks. If utilizing Eir for support, her Speed comes in handy for activating Windsweep and Watersweep to avoid enemy counterattacks and safely apply debuffs.

With a respectable 34 Resistance, Eir can play strong magical tank and support roles. Her native weapon Temari serves as a Sabotage Atk/Spd to increase her allies’ survivability and can be combined with other Resistance-based debuff skills such as Sabotage Def and Res Ploy to decrease every stat of multiple enemies.

As a flier, Eir has the most flexibility and mobility out of every class. She can fly over terrain such as mountains, rivers, and lava flows that no other class can traverse to reach enemies, escape, or contribute in her allies’ escape with Assist skills such as Reposition and Smite. Flier-exclusive skills such as Aerobatics, Flier Formation, Guidance, Ground Orders, and Air Orders also greatly increase Eir’s mobility and support capabilities via being able to move to spaces adjacent to allies within 2 spaces and helping her allies do the same.

Every player can receive a 4* copy of Eir at 1,000 points and a 5* copy of Eir at 15,000 points from the Mid-fest Digest Tempest Trials+ event. As such, Eir has fantastic availability because players don’t need to spend Orbs for a chance to summon her. If players missed their opportunity to receive the free copies of Eir or wish to merge Eir, they can simply spend Heroic Grails to buy her once she is available. Because of her inability to have IVs, Eir’s first merge also grants her an additional +1 HP, +1 Attack, and +1 Resistance.

Because New Year Eir is a red dagger unit, she performs better against green units than if she was colorless like her normal counterpart. She can also take advantage of the Pegasus Carrot, an Armor-effective dagger that neutralizes effects that prevent her from performing a follow-up attack if she has weapon-triangle advantage.

Unfortunately, Eir fails to take advantage of her solid 36 Speed because of her mediocre 31 Attack. Even if Eir performs a follow-up attack, she may struggle to deal meaningful damage against physically-bulky enemies; this is amplified by her red color polarizing her combat performance depending on the enemy’s color.

While not as poor as her normal counterpart, New Year Eir’s 59 physical bulk leaves much to be desired. In combination with her red color, Eir is prone to being OHKO’d by physical blue units and Dragons. Although Desperation is a strong B slot for any offensive set, it’s especially vital for frail units such as Eir so they can circumvent their low bulk.

In exchange for vastly increased mobility, flexibility, and support capabilities, Eir suffers from a weakness to Bows and the inability to learn many useful skills such as Bonus Doubler, Null Follow-Up, and Null C-Disrupt that would greatly help her offensive and/or defensive capabilities.

The status of being a free-to-play unit is a double-edged sword. While receiving 2 free copies of Eir and being able to summon her with Heroic Grails rather than Orbs is a nice trade-off for most players, if players are already investing into another Heroic Grail unit, they may not have the Heroic Grails to immediately invest merges beyond +1 into Eir.

Of course, Eir’s red color equates to having more trouble with blue units than if she was colorless. This narrows the scope of units that Eir can consistently KO and survive, as being neutral against all colors is theoretically more reliable than being strong against one color (green), neutral against two (red/colorless), and weak against one (blue).