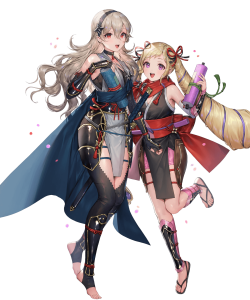 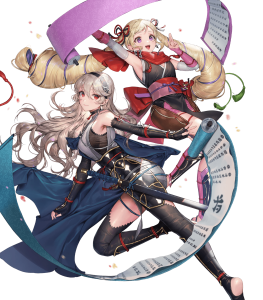 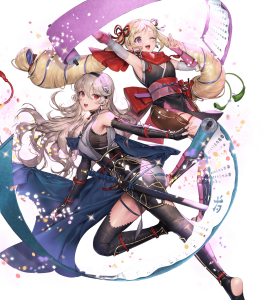 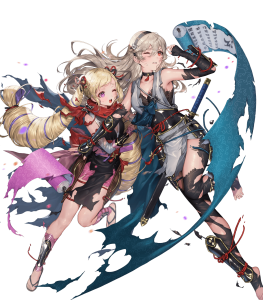 Think you can beat us? Think a- wait… (Aether Raids Offense / Wings of Mercy Enabler)

With 41 Atk and 40 Spd, Corrin and Elise are incredibly potent offensive forces that can deal high amounts of damage and consistently perform follow-up attacks.

In addition to granting +4 Spd in exchange for -4 Def/Res, if the Nightfall Ninja Act initiates combat, they also attack twice, making Ninjutsu Scrolls a Brave weapon. While only 9 Might may seem undesirable for damage output, being able to land 2 attacks before the enemy counterattacks rather than only 1 gives the Duo a much easier time KOing enemies before likely being KO’d by their counterattack. Additionally, Corrin and Elise deal true damage equal to 70% of the gap between their Speed and the enemy's (assuming they have more), effectively giving the weapon 16 Might anyway since the maximum true damage gained is 7.

On a side note, the animation is also really cool. :)

You know how Lyn and Florina’s Duo Skill grants them another action if they have already initiated combat during the current turn? What if Intelligent Systems copy-pasted that onto a 3-movement unit that deals magical damage and has higher Attack?

A one-time self-refresh gives the Nightfall Ninja Act fantastic flexibility, as they can use the additional action to retreat, reposition, and/or KO another enemy. An opportunity to retreat can be particularly helpful in Aether Raids Offense, as the Safety Fence structure stops the Defense Keep from moving on the Enemy Phase of turn 1 if every unit in the Raiding Party is outside of the Defense Keep’s Danger Zone or within 3 rows and 7 columns centered on the Safety Fence. In addition to erasing an enemy from the picture, KOing a second enemy with the additional action can inflict further recoil damage on Corrin and Elise via Fury 4, which helps them drop to ≤ 50% HP for allies with Wings of Mercy to teleport to them and continue the offensive. With their 38 HP at neutral being increased to 48 with 2 Mythics, the Duo can fall to 24 HP after 3 combats with Fury 4, landing perfectly into Wings of Mercy range. As long as they have ≤ 56 HP, they can also fall into Wings of Mercy range in 2 combats with Fury 4 in their A Slot and Fury 3 in their Sacred Seal.

Aether Raids Offense aside, being a Duo Hero allows Corrin and Elise to activate the Duo’s Hindrance structure in Aether Raids Defense, which prevents raiding Duo and Harmonic Heroes from using their Duo and Harmonic Skills. In Coliseum modes, the Nightfall Ninja Act scores as if they had 195 BST, ensuring that they can be used in even the highest scoring echelons.

Corrin and Elise are so skilled and sneaky that they can even bring a horse to their missions, providing them the benefits of 3 movement and access to Skills that improve their damage output such as their native S/R Far Trace and Lull Spd/Res.

While the Duo’s 38 HP helps with Wings of Mercy strategies in Aether Raids Offense as mentioned before, it certainly doesn’t help their survivability, especially considering their 23/20 defenses become 19/16 defenses with Ninjutsu Scrolls taken into account. Ideally, Corrin and Elise KO the enemy before receiving a counterattack on Player Phase and avoid Enemy Phase combat altogether to ensure they return from their missions alive.

For Aether Raids Offense: Duo’s Hindrance and no Disarm Trap

Because Disarm Trap can only be learned by Dagger wielders, the Nightfall Ninja Act ironically lacks access to it, which can turn Wings of Mercy strategies into unreliable guessing games for which traps are real and which traps are fake. This is arguably their biggest disadvantage when compared with the Ninja-Friend Duo; Lyn and Florina are Dagger wielders, so they have access to Disarm Trap and can thus trigger real Bolt and Heavy Traps without consequence.