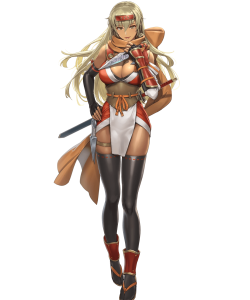 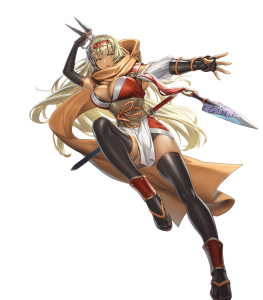 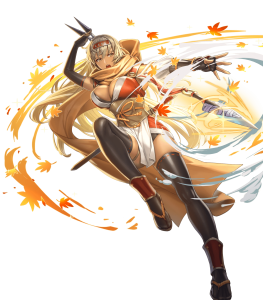 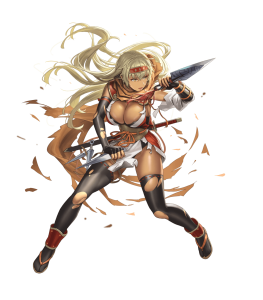 Eh, Father. I’m trying to sneak around, but... I keep alerting the guards. (Player Phase Offense)

The Nabata Kunai is Ninja Igrene’s preferred weapon, and what an excellent weapon it ends up being! For starts it gives Ninja Igrene +4 Speed just by equipping it, though it lowers her Defense and Resistance by -4. If she is the one to initiate combat, she will attack twice, lining up with other “Brave Weapons”. While this is all very vanilla and comparable to the other weapons belonging to the Ninja line, where the Nabata Kunai differs is that it gives Igrene the ability to warp to a space within two spaces of any ally within two spaces. This makes Ninja Igrene incredibly mobile, which can result in some nasty warping shenanigans that can particularly be exploited in Aether Raids defense, as well as in player hands.

Ninja Igrene has the offensive spread to back up her heavily offensive weapon and play style, sporting a very high base Attack stat of 43 as well as a respectable Speed stat of 38, even possessing a Super Asset that can be taken in the Speed stat to push it to a value of 42.

In exchange for Ninja Igrene’s high offenses, her defensive stats have taken a backseat. While her Resistance stat is an admittedly fair value of 30, her Defense sits at a low value of 22 while her HP sits at a value of 40. Ninja Igrene also has Super Flaws in Resistance and HP, although the HP Super Flaw can be exploited in order to take advantage of low HP threshold Skills and strategies which may be enticing.

This is not so much of a weakness, but more a nod at the somewhat double edged nature of the Nabata Kunai compared to the rest of the Ninja weapons. The Nabata Kunai has taken a mobility perk in the form of its warping potential in exchange for things such as the extra damage boost of the inheritable Ninja weapons belonging to Ninja Male Corrin or Ninja Shamir, or even the slaying effect that the popular Ninja Lyn of the previous year possesses. As a result, Ninja Igrene must focus on abusing the mobility perks granted by the Nabata Kunai in order to make her worth using over Ninja Lyn with her access to easier Special Skill abuse.