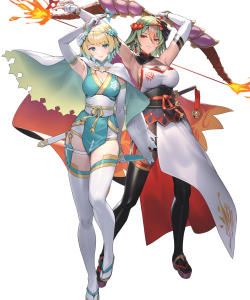 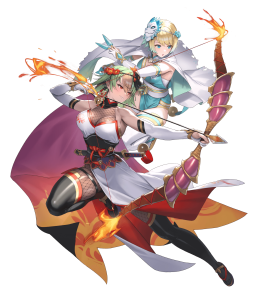 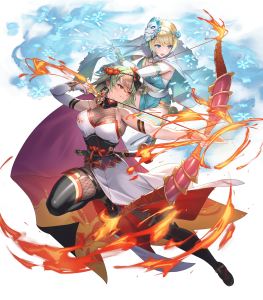 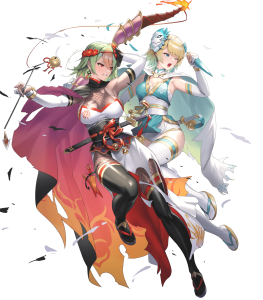 Laegjarn and Fjorm enter the Ninja festival with a weapon effect that is all-too familiar yet a slight toss-up. Indeed like past ninja weapons with Brave effects, Flamefrost Bow hits twice, but:

Basically, buff up your teammates, and punish enemies buffing themselves. This makes for a pretty stable unit that does more than your stereotypical brave nuking. This can easily be carried out through effective bonus distribution via Tactics or units with specialty buffing skills like Medeus, Spring Veronica, and Helbindi.

A brave weapon calls for high natural offense, and Laegjarn/Fjorm provides that in spades through base 44 Atk. They're no slouch at taking hits either with raw 37 Def and 38 Res. To top it off, all stats mentioned become further strengthened by the various stat effects from Flamefrost Bow, making the two a stable tanky unit overall.

As a ranged flier, Laegjarn/Fjorm gets access to innate benefits and cool skills, including Rein skills (for immediate stat dominance), Far Trace (post-combat movement and more stats), and the ability to initiate from an extended range while traversing over many problematic terrain spaces.

As is tradition for the star duo unit of Ninja banners, Laegjarn/Fjorm have the ability to spur themselves for another round of action via a one-time refresh button. This is akin to targeting themselves with Dance / Sing, and just about anybody actively using those skills can tell you about the flexibility that this additional action offers — from gaining the opportunity to net yet another kill to simply moving out of enemy range safely.

Besides this, being a Duo has a few perks, including high-scoring potential in Colisseum modes (counted as an effective 200 BST) as well as the ability to enable Duo's Hinderance in Aether Raids Defense.

Slow as a Glacier

Base 19 Spd, which decreases further to 11 effectively the -8 decrease from Flamefrost Bow, is leagues below lackluster. Given Laegjarn/Fjorm's playstyle and high damage output, though, this is often not a huge issue except for situations where they cannot manage to confirm a kill in one blow. This low Spd also meant the duo is likely to have the maximum damage reduction from Dodge skills (Vital Astra, Velocity, Frenzy, etc) applied against them, reducing their chances of defeating units in the "godsword" archetype in one go.

An inherent weakness of the Brave weapon trade that bears mentioning. With the number of ways to increase unit bulk, Laegjarn/Fjorm will definitely have to respect the efforts of fellow tanky units sometimes, especially with Flamefrost Bow's low base Mt per strike as well as its blue colouring.

Generally speaking, Laegjarn/Fjorm is operating at a generally disadvantaged stance. For instance, it's easy to compare them with the previous duo Ninja units due to their shared Brave and self-refreshing effects; compared to Lyn/Florina, Laegjarn/Fjorm lacks all-around coverage (due to their innate matchup disadvantage versus greens as opposed to being colorless) and the ability to use Disarm Trap, and they lack the huge and flexible threat range that make Corrin/Elise so feared by many. The previous ninja duos' high Spd stats also made it possible to inch past matchups or confirm kills with quadruple attacks — something that is totally not possible with Laegjarn/Fjorm unless supplied with specific outsourced means such as Bridal Catria/Thea or Divine Fang+.

Outside of these, Laegjarn/Fjorm is easily susceptible to an effective weakness from bows, as well as the usual countermeasures to dual brave units such as Hardy Bearing and counterattack cancellation.