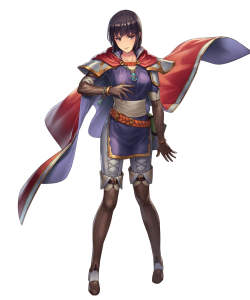 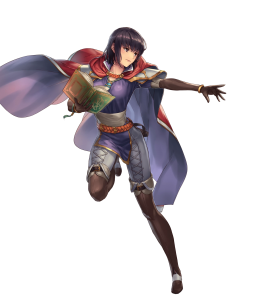 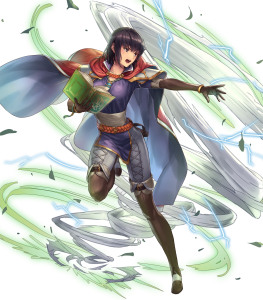 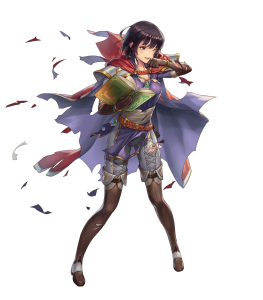 Thunderhead is a strong offensive weapon that carries the damage-scaling properties of a Blade tome without any cooldown penalty tied to it.

Olwen’s solid 35 base Speed makes her proficient in both performing and avoiding follow-up attacks.

In addition to her superior mobility, Olwen has access to class-exclusive buffs such as Hone Cavalry and Goad Cavalry

With a meager 53 physical bulk at base, Olwen is forced to take countermeasures in order to survive more than one round of combat against physical opponents that can retaliate.

While being a cavalry unit has its advantages, it can also be a detriment. On top of forests and trenches making it harder to navigate maps, Olwen has an innate weakness to cavalry effective weapons. Additionally, cavalry units also have limited access to certain skills.

Glass cannon build.
This build aims to maximise Olwen's atk and spd. With skills like Life&Death (LD), Chill Spd 3 and Thuderhead's eff+, Olwen debuffs the enemies' spd/res and buffs her own spd. This increases the likelihood she will double even the fastest of units. She will hit very hard on player phase thus further damaging the enemy with Savage Blow. The damage and debuffs can be used to aid other units in taking down particularly tough enemies.

Since LD decreases her res and def, this makes her more fragile, thus she can go into brazen rage quite easily. The brazen skill will boost her offensive capabilities and res, thus improving her survivability against mages. (This skill can be swapped out with Braz Atk/Spd if you want to fully vapitalize on her offense though).

Glimmer is used for the low cool down.

When I saw that there was an Olwen that didn't suck, I got really happy. Indeed, she does not suck. On a tactics team, she is truly unrelenting. I went for L and D over SS mainly so she would have a higher arena score.

My most terrifying mage. On a cavalry team, she can dish out monstrous amounts of damage. With a hone cavalry buff and Reinhardt next to her, (they have an S support) she can double a +spd Karla with even spd wave active. She mows down everything in her path.

Atk Boon is also an option, but her being a Blade Tome but better, I'd go full speed, because she still reaches 44 atk, that will be 48 with swift sparrow and this way she has 41spd, 45with swift sparrow, both pretty solid numbers, and, like I said earlier, this is a blade tome, that means it is a crime not to fit her in a horse emblem team that can give her hone and fortify cavalry, that resultin on +24 additional damage and having 54 atk and 51 spd on initiation, Glimmer is the best option for a blade tome, no doubt here.

And last but not least, if you want to get into desperation range more safely, you can go with Fury 3, but that also reduces your damage and speed by 2, or if you are a rebel, forget her expensive and precious swift sparrow and go all guns blazing with Life and Death 3.

"Run in the Mill" Bladetome build for Olwen. +spd, -res can work too as long she with a Horse Emblem team or Mixed Tactics team. As for seals, Atk 3 seal is good for buff team that can give plus +6. While buffs that are Plus +4 and drive/spur works with Spd 3 seal.