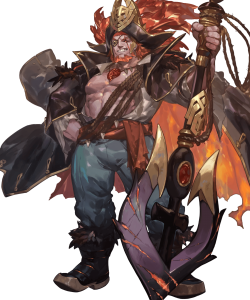 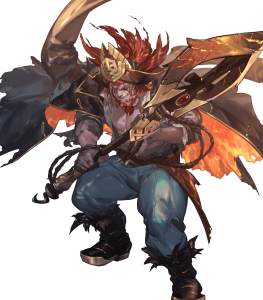 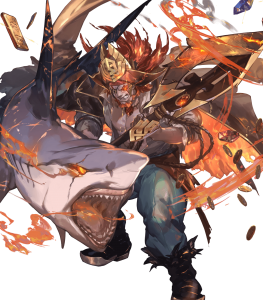 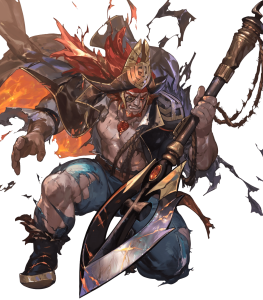 The Grand CEO of Oil Spill-ism (Near Savior)

Surtr ditches his outdated PRF weapon for what is 100% a blue clone of Loyalist Axe. With Sea-Sear Axe at his disposal, Surtr gains a lot of what makes Valentines Gustav great in a single weapon slot:

Surtr's slow-but-powerful unit archetype eats well in 2021 with a high statline total and distribution that minimizes Speed — which isn't even a very apparent issue thanks to the first-hit damage reduction from Sea-Sear Axe — and maximizes gains in every other stat. His statline is virtually identical to previous ridiculously strong armors like Brave Edelgard and Dheginsea with slight variations; thus, the king-turned-pirate naturally enjoys high damage, even defenses, and great overall tankability throughout all builds.

As mentioned, being an armor results in a large number of stat points to play with; a base stat total of 186 gives lots of room for optimal distribution while making Surtr a fairly great choice for Colosseum-based modes (assuming merges aren't a problem). Additionally, coveted skills such as Crafty Fighter, Special Fighter, Bold Fighter, and the Save skill line are available to him and provide nice versatility combined with his other assets.

A vastly improved and updated version of Surtr's previous PRF skill, Surtr's Portent can change the tide of the battle against incoming enemies by easily debuffing the closest one at a flexible distance while granting a useful bonus array to Surtr himself. While easily replaceable with other C skills like the Save line, Portent serves as nice default bonus that gives Surtr a team support option (so the Speed debuff isn't completely useless if you run an ally that benefits from increased follow-up potential) while making him even more difficult to approach for incoming enemies.

This is the usual song and dance that people of the armored ocean sing nowadays. That is, Surtr finds himself unexempt from bad movement options (especially without ally-granted support through Guidance, Armor March, Ground Orders) and vulnerability to armor-effective attacks.

Even worse, our good old friend Brave Hector shares a significant amount of perks with Surtr while being a universally preferred blue lance armor option thanks to other additional benefits (armor effective neutralization, follow-up denial) that Maltet grants. In comparison, Surtr effectively offers only a heavy stat advantage and first-hit damage reduction — which, make no mistake, are still pretty darn great to have.

Surtr's base 36 Resistance is the lower of his defensive stats. While it's padded out very well by the Atk debuff from Sea-Sear Lance and is perfectly suited for spot investment (such as through Resistance-granting Mythics and skills or running ally support skills like Distant Guard), no investment means magic attacks can burn through Surtr fairly quickly in repeated strikes.

Surtr's very low Speed isn't exactly a huge issue given that Sea-Sear Axe greatly reduces the first hit of any incoming follow-up attack, and Surtr typically does more than enough single-shot damage that Null Follow-Up becomes a mere inconvenience. It's worth noting, though, that Dodge skill users become a considerable threat as their Speed completely eclipses Surtr's and can offset a lot of damage he deals back.