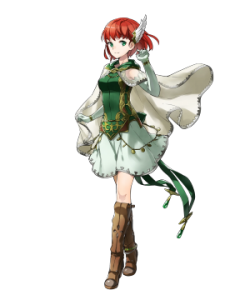 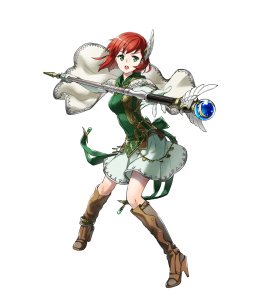 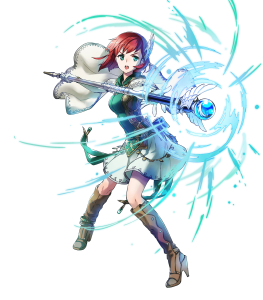 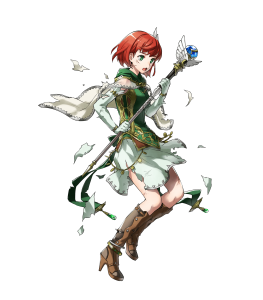 This set maximizes Priscilla’s potential by taking advantage of her mobility and workable offensive stats. The key component of this build is the Dazzling/Wrathful staff combo; this effectively turns Priscilla into a ranged, magical Firesweep user. This allows her to easily circumvent any potential issues with her physical bulk, as she can freely attack enemies without ever having to worry about counterattacks. There is no difference between running Wrathful Staff as a B skill and a Dazzling Staff refined weapon or vice versa, so the choice is fully dependent on the availability of either Genny or Bridal Lyn for Skill Inheritance.

The choice of weapon, Assist, and Special is mostly up to preference. Pain+ combos exceptionally well with double Savage Blow (C skill and Seal), as it results in the enemy team taking a massive 24 points of damage, in addition to whatever damage Priscilla dealt to her target (+10 more from Pain+). This area damage will easily knock units out of high HP threshold skills such as Quick Riposte and Guard, or even unique weapons like Celica’s Ragnarok or Alm’s refined Falchion. Gravity+ can lock down entire teams if Priscilla has access to support in the form of movement Assists or Refreshers. Her base Panic+ is fairly situational due to relying on teams utilizing field buffs, but can be useful in a pinch or for budget purposes.

Atk/Spd Push is a powerful skill that finally gives healers a strong offensive A skill while not simultaneously limiting their mobility. However, it comes with the caveat that the healer now needs some form of sustain in order to be able to get back up to 100% HP. This is best accomplished by either running the Live to Serve Seal or Martyr+. Atk/Spd 2 gives Priscilla the most offensive stats possible without forcing her to alter her build or playstyle. Atk/Spd Bond and Brazen Atk/Spd give significantly more offensive stats in theory, but can be very difficult to use given Priscilla’s high mobility and this build’s intended playstyle. Attack +3 and Speed +3 are good budget options for simple stat boosts.

Savage Blow for both the C skill and Sacred Seal works very well if running Pain+, but can be replaced for other skills for more utility. A cavalry buff like Hone Cavalry works well since Priscilla works best in a full cavalry team, while Spd Ploy and the Res Ploy Seal combo well to allow Priscilla to provide more team support while also improving her own offensive capabilities. The Speed +3 and Attack +3 Seals are both good options to improve her offenses further. The Live to Serve Seal is a fantastic option that gives this offensive support set an excellent source of sustain, as Priscilla will no longer need to rely on a Martyr+ to access self-healing without sacrificing part of the Dazzling Staff/Wrathful Staff combo.

As this is a fully support-oriented set, the IVs don’t make a huge difference. For the sake of optimization, however, +ATK will improve Priscilla’s damage and healing while +RES will improve her ability to land Ploys.

The chosen weapon is entirely up to preference, but Gravity+ is fantastic for taking advantage of Priscilla’s mobility. Alternatively, her base Panic+ will work fine, though it’s a bit more situational than Gravity+. Regardless of choice, the Dazzling Staff refine is the best choice just to keep Priscilla safe whenever she attacks to apply the chosen debuff.

Atk/Res 2 is chosen to give a boost to Priscilla’s healing and ability to land Ploys, while also granting a slight boost to damage. Any of the various Bond skills can also work; the ones that boost Attack work best to boost healing and damage, but keep in mind that the other stats are mostly wasted on this set due to the full support setup. Attack +3 and Resistance +3 are good budget options as well.

Wings of Mercy grants Priscilla a big boost in mobility, allowing her to teleport directly next to allies that need healing the most. Alternatively, Live to Serve gives her fantastic self-healing and sustain, allowing her to not be afraid to tank enemy mages in a pinch. However, she is better off with running the Live to Serve Seal in order to maintain access to the superior mobility that Wings of Mercy grants.

Priscilla’s C skill and Sacred Seal are mostly up to preference. Spd Ploy and Atk Ploy Seal make great use of Priscilla’s good Resistance stat, allowing her to provide more team support than simply healing and occasionally applying debuffs. These are easily interchangeable with any other Ploys, buffs like Hone Cavalry or simple stat boosts like an Attack +3 Seal. The Live to Serve Seal is a particularly strong option for Priscilla’s Sacred Seal, due to it also allowing access to Wings of Mercy.

As a cavalry unit, Priscilla enjoys superior mobility compared to most of the other healers. She even has access to powerful cavalry buffs. While her offensive stats are strictly worse than Elise’s (29/29 versus 32/32), she does at least have slightly better bulk. Thankfully, her offensive stats aren’t a huge deal for a pure support build. With the introduction of weapon refining, Priscilla can now run an incredibly powerful set: the Dazzling/Wrathful Staff combo. This set effectively turns her into a ranged, magical Firesweep user, except that she can still retaliate when attacked.

Unfortunately, these perks come with a number of downsides. Healers have awful skill availability, as they are completely locked out of potent skills like Fury and offensive Specials like Iceberg. As a cavalry unit, Priscilla has to further contend with suffering a weakness to anti-cavalry weapons and getting blocked by forests and trenches.

Luckily, these annoyances can mostly be circumvented with smart play. While Priscilla’s lack of potent skills does put a significant damper on her potential, her access to the powerful Dazzling/Wrathful Staff combination can make her a dangerous threat. Add in her excellent cavalry mobility and decent offensive spread (supplemented by cavalry buffs), and Priscilla is a powerful unit that can demonstrate why healers can now be a serious threat.

This set is unique to healers and allows them to function as ranged, magical Firesweep users who can also counterattack when attacked. Priscilla makes exceptionally good use of this due to her mobility and offensive stats.

While 29/29 is fairly mediocre as far as offensive stats go, Priscilla’s access to cavalry buffs gives her a significant advantage over other healers.

As a cavalry unit, Priscilla enjoys superior mobility as well as access to powerful buffs like Hone Cavalry.

Priscilla has enough Resistance to not only be able to safely tank a hit from a mage, but also to make effective use of Ploys to provide additional team support.

Thanks to her demotion into the 3-4 star summoning pool, Priscilla is now much easier to summon, obtain ideal IVs, and merge.

Priscilla’s status as a healer locks her out of a huge number of strong skills. Furthermore, the skills she wants to create her best builds (such as Wrathful Staff and Atk/Spd 2) are very difficult to come by.

As a cavalry unit, Priscilla shares a weakness to anti-cavalry weapons. They will completely obliterate her, particularly the ones that deal physical damage.

Priscilla is my favorite FE7 character, so I wanted to have her be my main healer, as well as being able to go ahead and do some assisting damage with Savage Blow. Foes cannot counter attack, and it allows her to chip away at their health while being able to do 7 more damage to surrounding enemies.

My longtime cavalry healer, fairly balanced in all stats, can heal off fury damage, and can deal the needed magic damage to finish off physically tanky units.

Seal: Close/Distant Defense or Defense Tatic
Truly Delicate Princess PvE (PvP assume works the same) def AI mixed build... most important part is to UNEQUIP HER WEAPON so she never feels the need to rush forward. With no weapon the AI holds her back and even has her try to avoid attacks. The only time she puts herself in arms way is when she goes to heal her allies and even then the added range of Physic+ allows her to (usually) keep her self hidden behind her more combat ready allies.

Also another acceptable build would be putting double Distant Defenses, one in her A slot the other in her seal. Even without an attack skill she could then easily draw in mages, and even some physical ranged units, for her bulkier friends to jump on.

If running a mixed team you could also swap Close Defense to Defense Tatic in her seal granting her serious ally support while holding in the rear waiting to heal her allies. Non-mixed Tatic teams could swap in a +Res or +Hp/Res into her a slot which gives her that added boost to run Ploys in both her C and Seal slot but this is really intended for a mixed team where she normally outpaces her allies. If a Calvary Emblem team she should still stay in formation allowing her use of her weapon but then she is still vulnerable to getting baited.

One of the holes here is that with a weapon her heal ability is also lowered by 6, but often a well timed heal is more important than a slight boosted heal where she’ll probably run out and get herself clobbered beforehand anyway. If the deminished heal is really ruining your day then you could swap in Recover+ for an extra 10hp but at the risk of getting her caught on enemy phase more easily due to its decreased range.

Also if you’re willing to sacrifice a B slot debuff like Chill Spd/Def then you could swap in Martyr+ for the self heal effect but that’s a pricey inherit and probably would do you better elsewhere.

This is the story of a young girl that found a grenade launcher lying on the side of the road.

The Wrazzle Dazzle combo works surprisingly well with Priscilla, allowing her to chuck her grenades at the enemy time while providing a reliable hp source for their teammates.
The +3 spd A slot will improve her survivability and offensive capabilities, but it could easily be replaced for Distant Defense to be able to make her more tanky agaisnt ranged units.
Wrathful Staff is a no brainer, but since its not an easy skill to obtain you gan go for Renewal to improve her survivability.
The three things you must NOT change under any circumstances though are her staff, her C slot and her Savage Blow Seal, since the build wouldnt even exist were it not for their existence.

This build will synergize well with a team that uses a dancer and a tanky infantry unit (preferably with Reposition), since you'll want to keep her out of the way of danger due to her low defense. Feel free to use her as a magic bait however, since her resistance will absorb that damage like a sponge.

This is a basic and self-explanatory Splash Damage build similar to that of Elise. It's best to use it with teammates that can protect her. 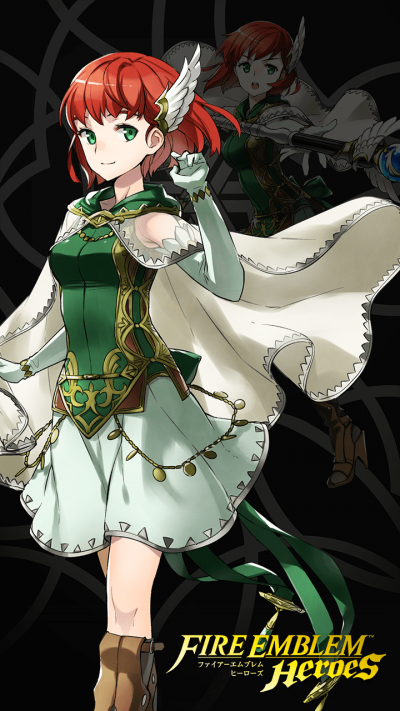