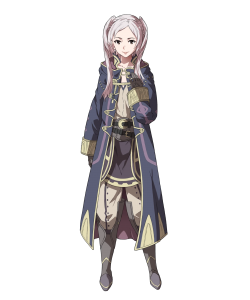 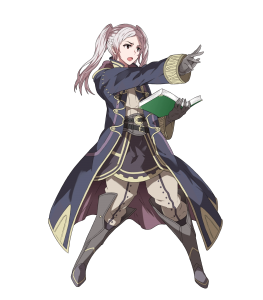 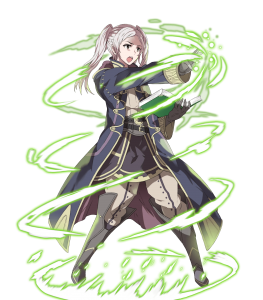 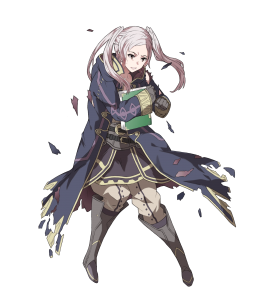 Taking advantage of her higher than average physical bulk, Robin can make excellent use of her Tactical Gale tome to act as a dedicated counter to many popular blue and colorless threats such as Reinhardt and Brave Lyn. Tactical Gale’s unique refine, granting a full spectrum Tactics buff, is also one of the best single-skill buffing abilities in the game and grants her top-tier support ability.

Ignis is Robin's Special of choice here. Whenever she is baiting a blue or colorless unit on Enemy Phase, she is generally going to be both taking as well as returning two hits. However, thanks to the 40% damage boost from Triangle Adept, Robin will often be successful in taking down her opponent with her second attack without the help of a Special. As such, Ignis' 4 cooldown lets her instead have her Special charged and ready for the following Player Phase, allowing her to initiate onto and nuke a second foe. Of course if one would rather prioritize being absolutely sure she scores her kill rather than her follow-up combat, or if one expects her to be fighting mages that don't double her, Bonfire can be used instead.

Triangle Adept is the crux of this build. The 40% boost granted by it is used to both bolster Robin's rather mediocre natural Attack, as well as reduce the damage she takes to equally mediocre levels, even when she cannot retaliate such as against Brave Veronica or a Firesweep Bow user. While it is by far the most impactful skill she can use, it does come with the caveat that she will be relatively vulnerable to enemy units running Cancel Affinity. While this is an avoidable issue if one primarily intends to use Robin as a counterpick unit or non-core team member for modes such as Arena Assault, a Robin being built as an Arena core may instead prefer to use Distant Def. Especially when stacked with the Distant Def Sacred Seal, this will make Robin quite reasonably durable, however, beware that due to the loss of Triangle Adept’s offensive component her ability to successfully achieve kills may be cut close or sometimes fall short against higher-resistance enemies, possibly necessitating the use of Bonfire.

Quick Riposte is used to ensure that Robin makes two attacks when initiated upon, crucial due to her low Speed. Guard is an alternative if one wishes to keep Robin safe from enemy Specials, in which case Quick Riposte can instead be switched to her Sacred Seal. As a final alternative, if one fears Firesweep Bow Brave Lyn, Bowbreaker can be used to make sure she isn't ever forced to take multiple hits and can double on Player Phase.

Robin's C slot and Sacred Seal choice are relatively flexible, able to be outfitted into whatever support skill her team may desire. Because Tactical Gale has two range and already applies buffs to her allies, it is a good idea to utilize combat boosts such as Drive Spd and Drive Atk in these slots due to their similar range and the fact that they will stack with Tactical Gale’s buffs. If one wants to boost Robin’s own combat and tanking ability, she can also make great use of Distant Def or a Smoke skill such as Atk Smoke.

Robin can also utilize her original base weapon, the Gronnwolf tome, to act as a dedicated cavalry counter. This set is a decent budget set, requiring no inherits from heroes unable to be obtained as 3 star units. For her refine, Keen Gronnwolf's unique effect is chosen to ensure she can shrug off any cavalry buffs that might otherwise cause her trouble or prevent her one-shot-KOs, as well as brush off any Blade tome cavalry, though it can also be kept as a simple Gronnwolf+ without changing much.

Unfortunately, Robin's matchup versus Brave Lyn is rather touchy. In a completely neutral matchup, Robin is just a single Attack point short of taking her down in one hit, though this can get extremely hazy when faced with a Brave Lyn with a varying merge advantage or a boon in HP or Res, and much of the same goes for popular cavalry team units like Cecilia and Gunnthrá as well. Thus, it is a good idea to solidify these matchups by investing in skills that boost Robin's Attack.

Fury is fantastic as well as relatively cheap choice that gives Robin an appreciated all around stat boost, and also helps ensure she is able to survive an opening Moonbow from an opposing Reinhardt.

Vantage gives Robin the ability to safely bait multiple cavalry units in a single turn as she will likely only be forced to take a hit one time before reaching Vantage range, and synergizes well with the ability to one-shot enemies thanks to Keen Gronnwolf. Robin must beware Firesweep users that are unable to be counterattacked, however. If Firesweep Bow is expected to be a problem, Bowbreaker can ensure she doesn't get hit more than once, which would quite likely kill her unlike when using Tactical Gale.

Robin is quite independent of her C slot here, any decent supportive skill such as Drive Spd working perfectly well based on whatever her teammates need.

For her Sacred Seal, Atk/Def Bond is firmly the best choice and acts as another welcome Attack boost for making sure she is able to without issue take down as many enemy cavalry in one blow as possible. Alternatively, Attack +3 is a good option that may be more readily available. If her ability to take her first hit is a huge concern, Deflect Magic or Deflect Missile can guarantee her ability to survive an opening Dire Thunder, Brave Bow, or Firesweep Bow.

She has a fairly high Defense stat of 29, some of the highest among mages. This makes her a great candidate for acting as an Enemy Phase counter to threats such as archers, whom she can grant herself a color advantage against with her Tactical Gale tome.

As a defensive green mage, Robin manages to carve herself a solid niche as a counter to units that commonly make up the core of Arena teams such as Reinhardt and Brave Lyn. This makes her a fantastic character to have in the right situation.

Robin's Attack and Speed both sit at an unimpressive 29, and even with her finished build her Attack is rarely if ever going to reach 50 without exceptional investment. This means she is usually going to have difficulty in most matchups without the use of specialist weapons and skills that restrict her effectiveness to a rather limited set of units.

With just 22 Resistance, Robin is often going to have difficulty fighting mages, sometimes including those she has a color advantage against. G Tomebreaker is also a relatively common skill, especially among fellow green mages, that she will have very little ability to fend off. 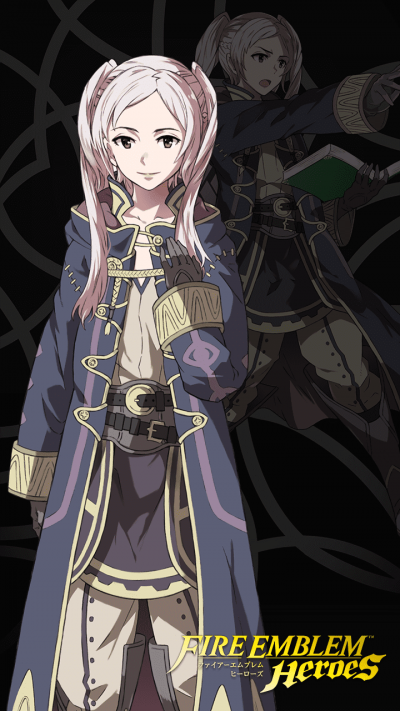