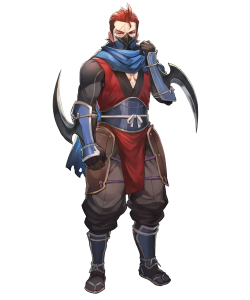 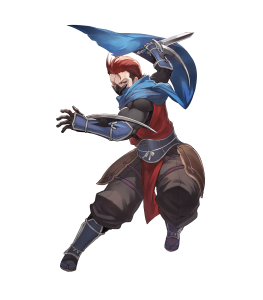 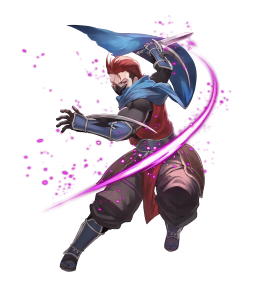 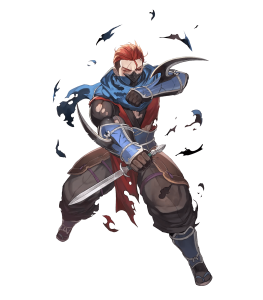 Saizo’s mix of good Speed and respectable physical combined with the potentially debilitating effects of his unique personal weapon, Saizo’s Star, enables him to take on the mantle of a defensive tank quite effectively, capable of tanking physical hits with relative ease. A +ATK IV is highly recommended to increase his damage output (as well as the amount of damage he can heal if using Aether as his chosen Special), though a  +DEF or +SPD IV may be worth considering as well to bolster his raw survivability.

Saizo’s ability to elevate his stats (particularly his Attack) to high extents with relative ease also enables him to make pretty good use of a Vantage sweeper set-up, particularly for use in Aether Raids. Since he will be reliant upon his ability to consistently fell incoming foes with a single hit, an Attack Asset is his ideal choice of IVs to maximize his raw damage output.

Loyal retainer to the prince of lobsters, Saizo: Angry Ninja was previously considered one of the more underwhelming dagger units in the game. Although he possessed a good amount of physical bulk and Speed, his unimpressive base Attack stat combined with his exceptionally poor magical bulk rendered his overall performance severely lacking. While not necessarily outright horrible, Saizo struggled to deal significant amounts of damage without being overly reliant on Special activations in order to do so and was ultimately left without any discernible niche where he was not already sorely outclassed by another unit.

However, the introduction of his own personal weapon, the aptly named Saizo’s Star, has done much to change this. In addition to retaining the devastating debuffing qualities of his native Smoke Dagger, Saizo’s Star boasts a unique refinement option with tremendous potential, translating all debuffs on his respective opponents into an equivalent in-combat boost for himself. This essentially allows him to gain a massive +12 stat advantage against any opponent afflicted by his weapon’s debuffs — and when taken into consideration alongside the fact that this could be bolstered further with field buffs AND in-combat buffs, Saizo can perform as a truly powerful threat in one’s control under the proper circumstances. All in all, this weapon enables the angry-faced shinobi to be quite suited towards use in the Enemy Phase — a feat not typically not expected of ranged units — and even lends itself perfectly for modes such as Aether Raids Offense, specifically with the commonly utilized “supertank” and Vantage sweeper set-ups where support is typically given to and centered around a singular unit.

Saizo is not without weaknesses, though. Most notably, although Saizo’s Star does possess excellent potential, initially obtaining this potential can prove to be quite troublesome due to the fact that the weapon does not apply its debuffs until after combat is resolved; this means that for his first round of combat, Saizo will have to rely entirely on his unimpressive base stats to carry him through, which may sometimes result in him being killed before his true potential is unlocked. Furthermore, his magical bulk is exceedingly poor and renders him virtually incapable of handling most magical threats, even with the boosts from his PRF.

Overall, Saizo is a decent unit whose latent combat prowess lets him serve as a fantastic addition to most team compositions, and can shine when utilized alongside units who can help him maintain his PRF’s combat boosts with greater consistency — just be sure to keep him out of harm’s way from any opposing mages or dragons.

Saizo’s unique personal weapon, Saizo’s Star, allows him to bypass his initially mediocre statline and benefit from a tremendous boost to his overall potential under the proper circumstances.

While not necessarily exceptional, Saizo’s base Speed stat of 34 is respectable and provides him with a good foundation for denying his opponent’s follow-up attack, with this being especially useful if equipped with Null Follow-Up; this is only heightened further by the potential in-combat boosts he can receive from Saizo’s Star.

Saizo’s surprisingly sturdy physical bulk of 69 allows him to be quite proficient at trading blows with opposing physical threats, in addition to letting him make fantastic use of his PRF to function as a formidable threat in the Enemy Phase when capitalized on with the proper combination of skills and support.

As an infantry unit, Saizo benefits from access to powerful exclusive skills like Null Follow-Up which he can utilize to notable effect and augment his combat prowess sizably.

Saizo is currently available in the 3-4* pool, making the task of acquiring merges and the perfect IVs for him a relatively pain-free and easy task — especially in comparison to some of his direct competition.

Poor First Round of Combat

Despite its immense potential, the fact that Saizo cannot benefit from the aforementioned performance boost that his PRF provides until after he concludes his first round of combat means that he will be reliant solely on his inherent statline to carry him through, which may have debilitating consequences depending on his target choice.

Saizo’s poor base magical bulk of 52 hinders his ability to deal with incoming magical threats dramatically, often receiving heavy damage from such opponents if not outright KO’ed.

Specialized for crippling enemies for allies to follow up, this build is dedicated to safely activating the tide-turning debuffs associated with Saizo's eponymous shuriken.

The greatest hesitation with utilizing Saizo for post-combat debuffs is the possibility of him actually dying during the combat itself or during the subsequent enemy phase. To alleviate some of this concern, a Def asset combined with Fortress Def will push his defense to 41 points, granting him substantial physical bulk against DC melee units. And a Watersweep + Phantom Spd combo equips our pyrotechnic spook with the ability to deny counterattack kills from ranged units (especially those pesky dragon units) with combat speeds lower than 44. On top of these, a +Eff refined Saizo's Star grants a valuable boon in surviving EP after successfully debuffing an enemy crowd—effectively doubling the magnitudes of the enemies' stat penalties should they target him.

It should be stated that this build is focused on arena scoring. The -3 Atk from Fortress Def marginally helps in preventing Saizo from stealing kills from the bonus unit(s). And the Blazing Flame special can increase scoring potentials and, most importantly, satisfies Saizo's pyrotechnics theme. There aren't many C-slot skills that add to Saizo's debuff game, so anything goes here really. I suppose if you REALLY love Saizo, you can feed him Thrasir for Panic Smoke; but there are several other opportunity costs to consider in that exchange, so I wouldn't want to recklessly endorse eating a mythic hero.

Saizo&#039;s new weapon and refinement turns him into one of the best Close Counter dagger units in the game. This build aims to capitalize off of his weapon&#039;s effects to effectively become a unit that would sabotage the enemy with crippling debuffs during player phase and them off during the enemy phase.

A speed boon allows Saizo to double in the player phase to score early KOs, and allows Saizo to avoid doubles should he be engaged during enemy phase before hitting Vantage range. His resistance can be thrown away, since it is already quite low and he usually wouldn&#039;t have much trouble dealing with mages since his attacks will easily KO most of them anyway.

Saizo&#039;s Star (+Eff) inflicts -6 to all stats to opponents, which is incredibly good. The refinement makes this even better, as it lets Saizo boost his own stats with the debuffs he landed. This will let him hit incredibly hard, allowing him to OHKO or ORKO all but the most defensive units in the game.

Reposition is a solid movement Assist skill. It can be replaced with anything else, depending on your team composition, playstyle, and such.

Bonfire is great for his Special, as it allows him to further capitalize on his high defense stat. Most of the time, you would be engaging in the player phase, which would lower its cooldown, and he will be able to strike back extra hard in the first hit during the enemy phase. You could use other Specials as well. Moonbow is a good alternative for securing KOs more reliably during the player phase before his debuffs are applied.

Close Counter allows him to counterattack on melee units, making him more flexible during the enemy phase.

Vantage allows Saizo to hit before any attacks are initiated by the foe. Paired with Saizo&#039;s Star debuffs and the buffs he gains from those debuffs, Saizo becomes a monster that would be able to OHKO many top-tier units in the game this way.

Savage Blow works in the C skill to allow Saizo to kill more reliably during the enemy phase. He doesn&#039;t need any debuff skills in his C slot because Saizo&#039;s Star already takes care of all of that. However, you could use a different support skill instead of Savage Blow depending on your team composition.

For his Seal, Brazen Atk/Def works fantastically paired with Vantage. It will allow him to kill more reliably during the enemy phase through Vantage, and the extra defense not only allows him to tank through physical hits if he doesn&#039;t kill on the first shot, but also boosts the damage dealt by Bonfire. Brazen Atk/Spd and Fierce Stance are also good alternatives.

Hey guys it’s me Mair🥰😜
Saizo is a great unit for messing with your opponents strategies because with a build like this you will leave them totally confused.

I had to play around with him a bit before we got a good solid build. With bottled juice he tones down tomes since he has pretty bad res it’s good to give him as much as you can!!!

Close counter is a great asset when going up against some axes and swords so keep him built up with some Guard, swordbreaker or axebreaker.

And close defense so he is balanced along side close counter

Give some love for saizo

This build makes full use of Saizo's speed potential to ensure that he gets as most ORKO's as possible. This is because with a +spd boon, coupled with a +spd weapon refine and the Darting Stance seal, Saizo can reach a total of 45 spd, which is enough to ensure lots of follow-ups even without buffs. The Barbed Shuriken's effect reduces the cooldown of Bonfire to 2, which ensures that Saizo activates his Special in the most scenarios possible. Attack Smoke can be substituted by support skills or by Spd Smoke, which is more useful to his set but harder to obtain. Lastly, Poison Strike is a budget-friendly skill which partially weakens foes, but can be replaced by more powerful B skills like Special Spiral, which allows Saizo to run Ignis instead of Bonfire for better results.

+3 merged Saizo ultra tanky against any physical units except dragons. Part of Arena team. He helps buffs my team and debuff all foe's stats with this Rogue Dagger. 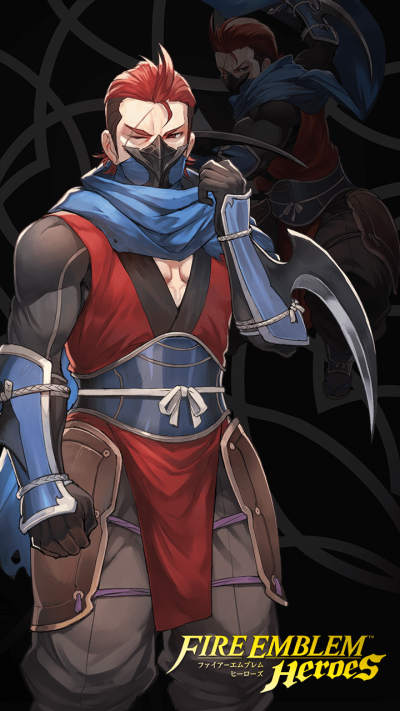