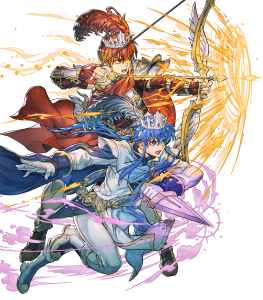 Bow of Twelve, S Drink, and Quickened Pulse ready Njörun's Zeal on Turn 1, allowing Leif and Seliph to shrug off Guard effects. Otherwise, the same logic with their A and B slots apply; Atk/Def Solo and Spd/Def Solo maximize damage output and bulk. Note that if using allies with Wings of Mercy to clear an enemy team in 1 turn, the Solo condition of not being adjacent to an ally may be difficult to achieve past Leif’s first initiation.

High damage output and consistent follow-up attacks are all but guaranteed thanks to the Destined Scions’ excellent 40 Attack and 41 Speed.

While Leif was initially disappointed that he could not wield the Gáe Bolg at the Day of the Twelve festival tournament, he and Seliph quickly learned that the Bow of Twelve they received instead is much better anyway, as it grants the following powerful effects:

Taking it from the top, the Slaying effect makes activating Specials more consistent, especially if players choose to replace Njörun's Zeal with a Special that augments damage during combat such as Deadeye.【Canto (１)】increases the Destined Scions’ mobility, flexibility, and viability in hit-and-run strategies, especially in combination with the additional action granted by Njörun's Zeal. +5 to all stats boosts Leif and Seliph’s already strong offenses in addition to improving their low bulk. Finally, the Miracle effect further patches their poor bulk, as they may not need to invest into their bulk at all in order to survive what should be unwinnable matchups. In tandem with Mystic Boost, Leif and Seliph can become incredibly annoying to KO while being a significant offensive threat, as they can heal after combat to “recharge” Bow of Twelve’s Miracle effect. Alternatively, being left at 1 HP after combat is fantastic for allowing allies with Wings of Mercy to teleport to spaces adjacent to them, allowing those allies to score KOs themselves, refresh the Destined Scions, or help them retreat.

Taking a page out of his Legendary version’s book, Harmonic Leif’s personal Special is Njörun's Zeal. Once per turn, this 3-cooldown Special (2 cooldown with Bow of Twelve) grants the Destined Scions an additional action, but with only 1 Movement. Despite the decreased range, Leif and Seliph can take advantage of this to KO another enemy and/or retreat, especially if they have【Canto (１)】available.

Healing 99 HP and granting -1 Special cooldown at the start of Turn 1, S Drink is an excellent B slot, especially for multi-map modes such as Chain Challenge and Tempest Trials. The combination of Bow of Twelve, S Drink, and the Quickened Pulse Sacred Seal can ready 3-cooldown Specials such as Njörun's Zeal and Deadeye on Turn 1 as well, boosting their consistency because they do not need to worry about enemy Guard effects.

With the power of teamwork, the best Jugdral boys have a Harmonic Skill that grants 3 separate effects to themselves and all allies from Genealogy of the Holy War or Thracia 776 for 1 turn:

A guaranteed follow-up attack and +4 Atk/Spd during combat make the Destined Scions even more explosive on Player Phase. The Desperation effect is nice, as Leif and Seliph can conserve Bow of Twelve’s Miracle effect for future combats or use the Desperation effect after Miracle has been consumed to 2HKO an enemy whose counterattack would have KO’d them.

Seeing Leif and Seliph celebrate the festival together is also cool. :)

Yet another contributor to Leif and Seliph’s great Player Phase potency is their Cavalry status, granting them 3 Movement and access to Skills such as their native Atk/Spd Catch, Lull Atk/Def, and Lull Spd/Def.

With only 40 HP, 27 Defense, and 20 Resistance, the Destined Scions are at great risk of being OHKO’d by both physical and magical enemies, especially if they activate damage-increasing Specials on their counterattacks.

Leif and Seliph cannot activate their Harmonic Skill if Duo’s Hindrance, an Aether Raids Defense structure, is active. The most notable loss is the guaranteed follow-up attack, as the Destined Scions have no way of neutralizing effects that prevent their follow-up attack, thus decreasing their consistency.

Grants the following effects to unit and allies from the same titles as unit for 1 turn: 【Resonance: Blades】,【Desperation】, and "if unit initiates combat, unit makes a guaranteed follow-up attack."

【Desperation】 Grants the following effect for 1 turn: "If unit initiates combat, unit can make a follow-up attack before foe can counterattack."

Has arena become less fun than arena assault?
Click to view the poll. I don’t like arena. It is way too hard even with the addition…
FE3H DLC Idea
What if there was another wave of DLC that allows us to recruit and teach the lords…
Fun With Names
I always like running my arena defense team as a theme around a bonus unit and the…
Future HoF watchlist
Grail units, 3*-4* summonables, maybe 4* specials, good candidates for being save…
Almost or Complete Arena Overhaul
My core is so bad right now that I cannot reliably complete a run unless the bonus…
Read More